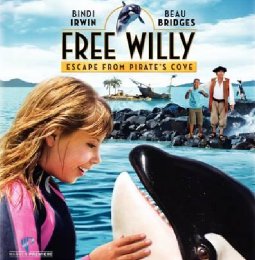 It was fun being in a different country. We filmed the entire movie in South Africa which was incredible.

My Dad had been to Africa before to film documentaries but it was my first time and I loved it. On my days off from filming I was very lucky to experience Cape Town and have many adventures such as climbing Table Mountain and playing at Boulder's Beach which was full of penguins. When I had finished filming we got to go on a 3 day safari in Africa.

My brother Robert also played a part in the movie and that was fun too!

2. What was the best part about being in a movie?

Free Willy was an amazing film to work on because it isn't just a fun exciting family movie but it also has a great message in it.

3. You got pretty close to some wonderful animals. What does it feel like to get so close to animals?

They used to get him to walk to the camera by putting some of his penguin friends behind the camera and he would waddle towards them.

It was really very interesting working with trained animals as opposed to the wildlife I film with in documentaries.

4. Do you have any more plans for movies?

I said to my Mum before we shot the film Free Willy, that I'd love to film a movie one day and that I'd also love to do the voice of an animated character. Hopefully there will be more movies in the future and more filming for television as well.
5. Why do you love animals so much?

I love animals because they are so much like us! Crocodiles are great mothers and very protective of their young. Otters are silly and they just love to play. Elephants are intelligent and such gentle giants. We should all treat animals how we would like to be treated.

Every time we lose an animal species it is like losing a brick from a house. Pretty soon the house just falls down.

I believe that we will lose a lot of animals from the planet before I am old enough to drive. That is very sad. I want to encourage everyone to do something in their own way to help stop this terrible thing from happening. Every kid can make a difference. Join me and change your world!

6. Beau Bridges played your grandfather in the film. What was it like working with a famous actor? Did he give you any tips?

In Free Willy I got to work with Beau Bridges who is a very accomplished actor.

When I first started the movie, I was a little nervous about learning my lines. He gave me some great advice; he told me not to worry about it and to think about reading a script the same as having a conversation, I found that really helpful.

7. We love your show Bindi the Jungle Girl! You must have loads of AMAZING stories of working with wild animals! What are some interesting facts about animals?

Animals are SO amazing! Did you know:
· Australia's Saltwater Crocodiles are the largest reptiles on the planet.
· A Chameleon's tongue is twice as long as its body.
· Snakes cannot move backwards!
· The tongue of a Giraffe is as long as a kid's arm!
· Fish sleep with their eyes open!

I really love crocodiles and snakes but my favourite animal at Australia Zoo would have to be echidnas. I love them because they are monotremes, which means they are egg laying mammals. Did you know there are only two monotremes in the world? One is the echidna and the other is the platypus.

NOTE: (Echidna and platypus are native to Australia)

9. If you could turn into an animal for the day, what would you be and why?

I would love to be an Eagle because I could fly in the sky and watch over the world.

I am so lucky because I have a gorgeous German Shepherd named Diamond, and a handsome horse named Harry.

11. Your name's really unusual - we love it! What does Bindi mean?

My full name is Bindi Sue Irwin. My dad called me Bindi after a crocodile named Bindi and my mum named me Sue after dad's little dog Sui. The name 'Bindi' means "Young Girl" in Aboriginal.

My wish would be to save the Steve Irwin Wildlife Reserve in Northern Queensland in Australia from the threat of being strip mined. It was dedicated to my Dad and is very dear to me. If you would like to help me Save Steve's Place you can go to www.australiazoo.com.au and sign the petition.

13. Any advice for kids who want to care for wildlife?

One thing that everyone can do is not buy any wildlife products. When the buying stops, the killing can too.

You can start in your backyard by locking up your dogs and cats at night so they don't attack the native wildlife.

Also - you can KHAKI IT on Steve Irwin Day this November 15! Visit www.australiazoo.com.au for more info!