Blu-ray
Is Anybody There?
Related Articles 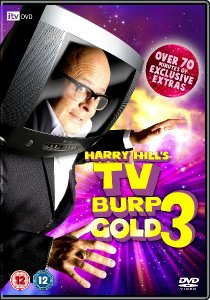 Harry Hill's TV Burp Gold 3 is a brand-new DVD packed full of the best bits from the multi BAFTA-winning TV Burp. Available to own from 1st November 2010, the disc features classic clips from the Burp archives, with many of HARRY's most memorable skits, gags and madcap flights of fancy, not to mention a host of exclusive DVD extras.

Brace yourselves for vintage funnies from the Burp vaults including breakdancing flies on Grimefighters, Sally's surprise at Kevin's piles on Coronation Street, and 'Prince Charles' unexpectedly checking into a hotel with a 'ladyfriend' in Emmerdale. There's plenty more for fans to enjoy as HARRY discovers his uncanny resemblance to Gandhi, challenges RUSS ABBOTT to recreate his dramatic performance of a heart attack in Casualty, and who can forget the big-collared comedian's rib-tickling take on CHERYL COLE's X Factor dance routine!

With other highlights including Knitted Character being rescued from a fire in Emmerdale … by a sausage, a vegetable that's a spitting image of River Cottage's HUGH FEARNLEY-WHITTINGSTALL, a spooked DEAN GAFFNEY on Ghost Hunting, the world's first ever Subo Wrestling competition, and the Most Elaborate Dog Wee of the Week revealed, this trip through Burps past is sure to deliver plenty of belly laughs…

In addition to the main show, viewers will be able to take an exclusive peek 'Behind the Burp', in which HARRY explains how he and the team make the show, and Knitted Simon Cowell, Knitted Cheryl Cole, Knitted Rolando and Knitted Character star in 'The K Factor Story', plus a world exclusive apology from Knitted Tiger Woods!

A busy autumn for HARRY also sees the new series of TV Burp kick-off on ITV1 and the release of his new book Livin' the Dreem published on 7th October by Faber.
ends.

"There are very few comedy programmes that I simply know will have me howling with laughter. Harry Hill's TV Burp is one of them. It's ITV1's comedy treasure: a supremely funny, silly, sideways, backwards, any way you like, view of TV…This is a comic rarity - a programme that any TV loving family can sit down and watch together."
Alison Graham, Radio Times