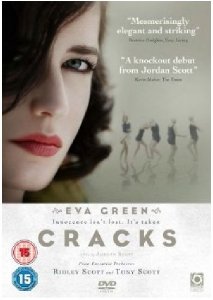 "A knockout debut"
The Times

Adapted from the novel by Sheila Kohler

Cracks is the sensuous and erotically charged debut from filmmaker Jordan Scott, a story of innocence not lost, but taken. In a remote and austere all girl's boarding school in rural Ireland, an elite clique of girls are the revered members of the diving team. Their undisputed queen is the captivating and avant-garde teacher, Miss G (Eva Green, Casino Royale, The Dreamers) - and the focus for the girls' adolescent infatuations, especially that of Di Radfield (Juno Temple, Atonement, St Trinians), team captain and Miss G's 'favourite'. Thriving on the attention, Miss G considers it her duty to teach her charges the ways of the world, regaling them with tales of her bohemian adventures. But cracks soon emerge in their idyllic enclave with the arrival of a mysterious Spanish pupil, Fiamma (Maria Valverde, King of The Hill). Exotic and appealing, she doesn't look for approval to her peers and, despite Di's machinations, becomes the increasing focus of Miss G's attentions. Seeing through Miss G's worldly façade, Fiamma's rebuttal of her friendship sets in motion a mesmerising tale of infatuation, jealousy and betrayal, as the girls discover terrible things can happen when fantasy collides with reality. Featuring stunning cinematography from Academy Award nominated John Mathieson (Gladiator, Kingdom of Heaven) which perfectly encapsulates the fairytale qualities at the film's heart, Cracks is a worthy entry in the canon of classics of 'innocence lost' alongside Picnic at Hanging Rock and Heavenly Creatures.