Get Some In out this Month 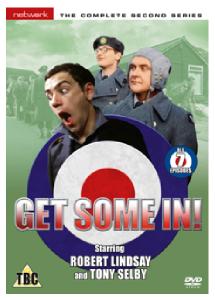 GET SOME IN - THE COMPLETE SECOND SERIES (PG)

On 9th February 2009, NETWORK will GET SOME IN - THE COMPLETE SECOND SERIES (PG). This is the first time that the complete second series is available in any format, RRP £14.99.

It is 1955, eighteen - year olds are getting their call-up papers for National Service. Embarking on two years in the RAF Skelton are the well-mannered and grammar school-educated Ken (David Janson); tough and cynical Scottish boy Bruce Leckie (Brian Pettifer); London Teddy - Boy Jakey Smith (Robert Lindsay) who dislikes the whole idea of National Service but who also has a heart of gold; yet another well-spoken, well-mannered and privately educated boy Matthew (Gerard Ryder), who also happens to be the son of a vicar. Unbeknownst to them, what awaits is the forceful and typically tough Drill Instructor Corporal Marsh (Tony Selby) with a sadistic sense of humour, and is gearing up to make the new recruits' lives miserable.

Inspired by the successful The Army Game and the nostalgic Dad's Army, writers John Esmonde and Bob Larbey (Please Sir!) set about writing and creating another show that would emulate the success of the aforementioned army - based series, but from a fresh perspective and revived energy. The result is this RAF - based sitcom GET SOME IN, which ran from 1975 - 1978 and was much loved and enjoyed by viewers all over the country.
***ENDS***

Episode Listing
Episode One
'C' Flight RAF Skelton enjoys a morning on the rifle range and an afternoon flight in an RAF transport plane. The shooting nearly ends in disaster when Lilley fails to obey the first rule of weapon handling, while the flight reveals Cpl. Marsh's yellow streak…

Episode Three
When Jakey receives a letter from his mother informing him of his granddad's imminent ejection from his house, he decides to take matters into his own hands… by going A.W.O.L.

Episode Four
It's Field Exercise Day: 'C' Flight are dropped 15 miles from the camp with no idea of where they are, and told to make their way back. The RAF regiment are detailed to stop them, and it doesn't look as though they will make it - to Marsh's satisfaction.

Episode Five
Ken has fallen for Mrs. Fairfax. Marsh sets up a bet with Leckie as to his probable success and thinks he's onto a sure thing… only circumstances would appear that Ken has, in fact, won Leckie's bet for him.

Episode Six
Cook-Corporal Jenner is an important man at RAF Skelton, although the products of his cookhouse are not to the liking of the 'erks'. When Lilley is set up to make a complaint, both Jenner and Marsh provide a fitting punishment for him…
Guest Roy Kinnear

Episode Seven
When a rugby team is formed, Marsh's attempts to crash both the rugger and the social barriers at RAF Skelton are not entirely successful. He eventually achieves his place in the team through Ken's self-sacrifice - for the common good of 'C' Flight.