Article
Killswitch - Steven Seagal is back 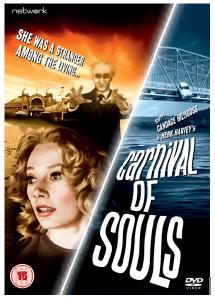 Network is delighted to announce the release of the sixties horror classic CARNIVAL OF SOULS (15). Cited as an influence on their careers by none other than David Lynch, Wes Craven and George A Romero, this film will finally be available on DVD with special features in the UK on 23rd February 2009, RRP £14.99.

Gifted young organist Mary Henry is riding in a car with friends when the car is forced off the road, plunging from a bridge into the river below. Mary's friends die instantly; miraculously, she emerges from the water.

But Mary is different...She becomes increasingly detached from everyday life, displaying an emotional coldness which those she encounters readily attribute to grief and shock. But the nightmare world that Mary now inhabits is one of transition: she is helplessly caught in a nightmare existence between the living and the dead. Mary moves to Salt Lake City, but is haunted by a spectral presence that lurks in the shadows of a derelict pleasure pavilion. She finds herself drawn inexorably towards the pavilion and the sinister Carnival of Souls…

Special features on the DVD are:
Audio commentary with horror experts Kim Newman and Stephen Jones Booklet written by Kim Newman
The complexity of its themes and eerily atmospheric direction and cinematography, with minimal reliance on special effects, are widely acknowledged; Carnival of Souls, directed by Herk Harvey and first released in 1962, transcends the horror genre to become a unique work of unsettling and enduring power.