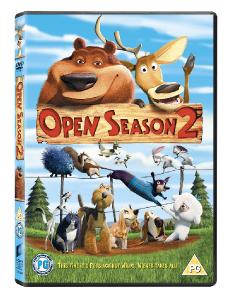 Boog and Elliot are back for more crazy adventures! The intrepid animal buddies return in the hilarious animated sequel Open Season 2, out to buy on Blu-ray, DVD and UMDTM Video and to rent on DVD from 16th February 2009, courtesy of Sony Pictures Home Entertainment.

Sausage-dog-turned-native Mr Weenie is kidnapped by a group of pampered pets, determined to return him to his owners. Our heroes and their friends, including the feisty Highland squirrel McSquizzy (BILLY CONNOLLY, Open Season, Lemony Snicket's A Series of Unfortunate Events) and the beautiful doe Giselle (JANE KRAKOWSKI, Open Season, TV's Ally McBeal), launch a full-scale rescue mission and soon find themselves in enemy camp: the world of the pets. Led by a toy poodle named Fifi, the pets do not plan to let Mr Weenie go without a fight. Can a toy poodle really bring down a 900-pound grizzly bear? Will Elliot ever marry Giselle? Find out in Open Season 2!

The DVD is packed with incredible interactive extras, including two featurettes and five fun games. The Blu-ray release boasts the additional 'Boog and Elliot's Traffic School', a Frogger-style game in which our heroes must save Mr Weenie! Open Season 2 is also available to buy in a DVD and Blu-ray box set with the original comedy caper Open Season.