last post by Jitendar Canth
What gig did you just go to?

last post by sj
[VIDEO] Only Murders in the Building

Review
Review for Love Live! Sunshine!! The School Idol Movie: Over the Rainbow

Review
Review for No Blood No Tears

Review
Review for My Girlfriend is Shobitch Collection

Review
Review for Blade Of The Immortal

Review
Review for Is the Order a Rabbit? - Season 1

Page 7 of The Afghanistan abandonment

Si, you’re going to have to clarify your intent, as from my perspective that post was offensive enough to not want to engage with it for fear of losing my rag completely.

Quote:
Jitendar Canth says...
"Si, you’re going to have to clarify your intent, as from my perspective that post was offensive enough to not want to engage with it for fear of losing my rag completely."
I will explain, but I suspect you're reading more into it than you need to.  I guess we'll see...

Quote:
Pete-MK says...
"FTFY. Funny how you phrased that sentence as if finding this kind of statement reprehensible is solely the domain of vocally liberal female world leaders, akin to, 'whoop, here comes those Liberals again!' I know that wasn't your intent, that's just how it came across.

There isn't a decent person on the planet who would find any excuse for treating women in this way, and it's of no surprise that every word they said once they sat in the comfy chairs was a tissue of lies, and that any protest is being broken up with birch twigs & bullet fire.

Wonder how long the powers that be will leave it. besides, they also lied when they made that statement. They don't want the women to have children. They want them to have male future soldiers and female future male soldier factories."
You are reading more into this than you should be.  I agree with everything you've written, but I am sick to death of the hypocrisy and silence from virtue signalling politicians.  Doesn't matter if left or right, if you want to add any of your favourite usual suspects to the list from the right, then please feel free to do so.

I picked on Adhern because she was the one leader I saw who came out and demanded the Taliban to refrain from violence against women and to uphold and advance the rights of girls and women in Afghanistan.  Words are easy, so what is she going to do when they inevitably ignore her?

"The world is watching"

Kamala Harris made this big deal about being a major player in the room when the decision to withdraw was made.  If we can see what was going to happen in Afghanistan, why couldn't she?  Her big thing at the moment, as referenced above, is a focus on Texas abortion laws and has been quoted as saying that a woman has the right to choose what to do with her body - just not when it comes to a Covid vaccine, where employees are now being mandated to take it or not work.  I agree with the vaccine, I disagree with the mandate.  And she's been very silent and out of the picture since the withdrawal.

You and I could clearly see what was going to happen in Afghanistan.  Why did those leaders (and plenty of other leaders plus the media) buy into this whole 'it's a different Taliban, they've learned a lot in 20 years'.  It's complete bollocks, they saw what they wanted to in order to back a really bad decision by Biden that was started by Trump.

I know an awful lot of people who served in Afghanistan over the last 20 years and they are all distraught at what has happened.  It's not just about women.  It's not just about children.  It's about everyone.  We have spent 20 years in that country trying to impose our way of living and culture on these people, and eventually some of them actually believed we were trying to help and started to change the way they thought and acted.  What happens to them now?

There's approximately 30m Afghans who make up the population of that country.  Not all of them support the Taliban, but we've left them to a regime that we originally invaded to defeat.  Whilst that decision was seriously flawed, like all decisions it has consequences.

The consequence of the withdrawal will be a lot of death and suffering, that started when people desperate to avoid what was coming clung to the side of cargo planes in desperation and fell to their deaths.

And all those virtue signalling politicians are interested in are a few soundbites that will sound good to their followers for 5 minutes until the news cycle moves on to something else.  We can't do very much on this forum or in general, but they are world leaders who are supposed to be intelligent, lead and have influence in the world.

I am angry about this and I don't care who knows it.  And I'm pandering to no one, so if you're offended by what I've written then so be it...

Next time, say that first.

Quote:
Pete-MK says...
"Next time, say that first."
To be honest, I thought that would have been obvious from everything else I've already written in this thread...

No. It came across as singling out two women of power feigning outrage at the Taliban's inherent misogyny when  it should be the default for everyone.

Plus, what's going on with the medically unsupported and dangerous abortion laws in Texas and the medically encouraged Vaccine mandate is as obvious a false equivalence as it's possible to make.

Pretty well anything said by the leaders of countries with lesser influence, which we are now bordering on, is only so much p*ss and wind unless they are backing it up with a big stick.

Their kind of damned each way.
Say nothing or make statements like Ardern and be deemed ineffectual and  virtue signalling.
Genuinely what would you have them do when the country who carries the biggest stick, in the west, packs up and leaves in what seems like ill prepared haste. 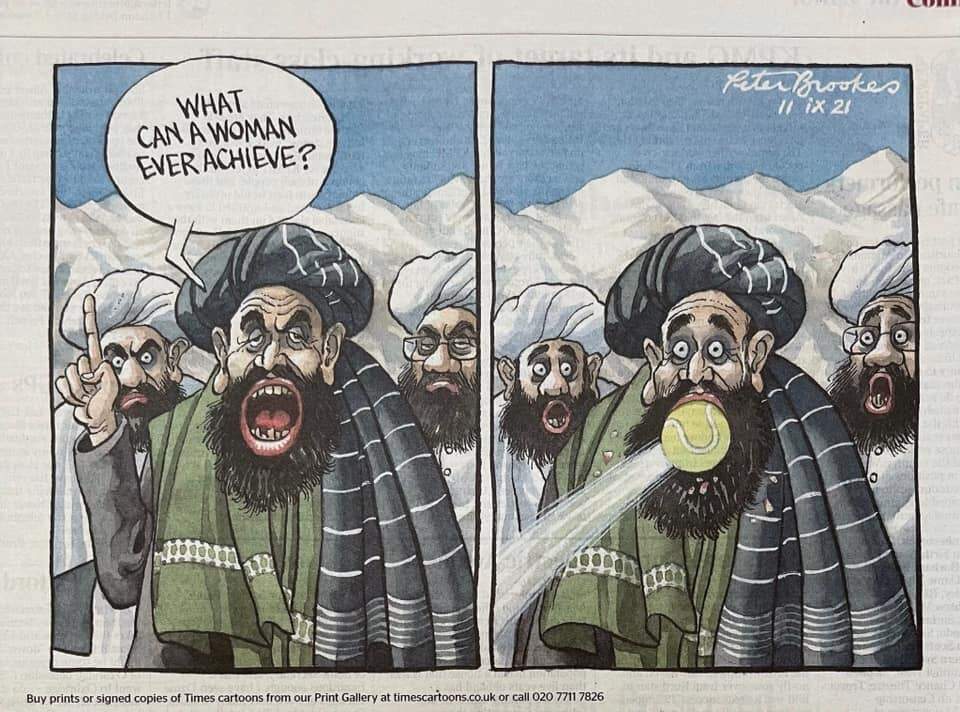 A student named Shabana Omari told the crowd she agreed with the Taliban's policy that women should cover their heads.

"Those not wearing the hijab are harming all of us," she said, referring to the headscarves worn by many Muslim women.

"The hijab is not an individual thing."

Heard about that, and was immediately reminded of abused wives always going back to their husbands.

Quote:
Some in the audience held babies, who occasionally cried during the speeches, while others were young girls clearly too young for university.Yep.

playing Devil's advocate, I guess it depends if you see it as being brainwashed from an early age, or a different way of life, way of thinking, religious belief etc.

You hear about modern Western women meeting a Middle Eastern man, they fall in love, she adopts his customs, as it's the only way they can be together.

Don't get me wrong, I hope that doesn't happen to my girls, they seem to feisty, obnoxious and pig headed for that, I mean independent strong women ;)