Info and forum posts by 'admars'

About this user: This user has chosen not to submit a description :(

You know training to be a nurse isn't something that can be done in an afternoon at the job centre don't you?

where my dad had his done there was an "army" of volunteers from a local charity with the football club.

RE: [VIDEO] What are you listening to now??? (Music recomendations)

new Bicep CD - Isles, so far so good if you like your dance music/electronica, whatever "the kids" call it these days :)


Quote:
The Japanese government has privately concluded that the Tokyo Olympics will have to be cancelled because of the coronavirus, and the focus is now on securing the Games for the city in the next available year, 2032.
but also:

Quote:
Olympic organisers hope the Covid-19 vaccine will mean the rescheduled Tokyo 2020 Games can take place in July - despite a newspaper report on Friday casting doubt on their going ahead.

An unnamed government official was quoted in the Times stating it would be "too difficult" to hold the event.

My in laws are both having their 1st one next week, and were told 2nd will be two weeks after. Same health authority, but different surgery to my dad, but strange how they get notice of 2nd.

I wonder if that means, if you were middle aged, but one of the older ppl in your surgery, you'd get done sooner?

RE: [VIDEO] Black Mirror: Anyone caught this?

So, the other night, I fancied watching Death to 2020. I realised I hadn't actually watched Bandersnatch or the last series of Black Mirror!

So the last few nights I watched them, I enjoyed them, they were good, but not up to the previous high standard. Also, despite not being that "Black Mirrory", I think I'm in a minority, but enjoyed the Miley Cyrus Vs. Nine Inch Nails one the most :)

As always, made you think, interesting how the 2nd one reminded me of how when we were kids, drink driving is bad, was drummed into our heads, but there doesn't seem as much effort to drive the message home about "texting and driving" etc.

I really enjoyed Death to 2020. Especially the soccer mom and Samnuel L Jackson, they were both excellent. I liked the way the first 30 mins or so about covid were quite funny, then as the subject change, it sobered up, before slowly getting back into comedy.

Lol, we should stream a video of us social distancing watching it "together" screaming at our screens :)

I see Saturday's (cup)and Tuesday's (league - we're 2 points/1 place above you) matches are on BT sport, I think I'm glad lockdown means I can't go next door to watch it ;)

shopto apparently has/had them, there was a hotukdeal post, again ppl speculating "scalpers" got them all

wasn't sure if this should go here, or Biden thread? 2nd half puts it here I think :)

[VIDEO] RE:What are you listening to now??? (Music recomendations)

I really really like the current single, and previous one by Bicep, played quite a lot on R1 and 6 music, album is out on Friday:


and just saw this video, quite like what I've heard of slowthai

some subtle fence sitting there, I'll have to read the comments to work out what he thinks of Trump's presidency ;)

this made me laugh...

Quote:
I replaced movie headlines with the Sunday Sport

good luck, what bundle are you hoping for, or did you get one in Argos?

Bandi - ppl are morons - chuck them all in a cell, knock some sense into them, and persuade others to not be so f-ing stupid...

Quote:
In a Facebook post, it said officers on Covid patrols over the weekend reported "every single" car park in the New Forest was "ram packed with vehicles".

It added: "When members of the public were asked where they have travelled from, some said that their home addresses are in places such as Guildford and Dorset."

The post warned: "We are in a lockdown, you should only be travelling locally. Guildford is over 55 miles from the New Forest. This is not local."

yep, I was shocked at the weekend to see a photo of someone I know, my age,  who has been in intensive care last few weeks with tubes feeding her due to covid :(

Before that the only person who I knew who had been really ill and died, was a friends grandmother, in her 80s, and ill anyway, the friends I've got who have had it said it was like "normal" flu.

Rob's link, like a smart version on lmgtfy, which I enjoy using at work to annoy ppl ;)

I'm more worried about not being able to see family and friends again than idiots who don't behave sensibly.

https://www.telegraph.co.uk/news/2021/01/17/germans-keep-refusing-quarantine-could-put-detention-centres/
Quote:
[quote]
[/quote]Germans who keep refusing to quarantine could be put in detention centres under new Covid rulesQuote:
In some German states where all other options have been tried, authorities to detain those who refuse to enter quarantine


Germans who repeatedly refuse to enter quarantine after being exposed to coronavirus will...it's not exactly the gestapo chucking you in a cell for going for a walk is it

worth watching the last minute or so if nothing else....

I never really thought about Prince as a great guitarist before, shame on me!

this is what made me aware:

Some of those listening parties are really interesting, especially if you like the artist. I have always loved PWEI back from my secondary school days when I was introduced to them, and was pleasantly surprised when Clint Mansell joined in with his ex band mates with anecdotes etc :)

RE: Any home insurance recommendations?

price has gone up £5, which isn't much, but go to comparison out of interest, the company I was with a few years ago, is £25 cheaper than "best" price my current provider will do!

my dad was told they don't know when he'll get 2nd jab, as they want to do more 1st jabs first, although someone there was getting their 2nd one, as they had their first before Christmas.

I saw some social media posts from Penn (and Teller) about this last night:

Siegfried Fischbacher, one half of celebrated magic double act Siegfried and Roy, has died from pancreatic cancer in Las Vegas at the age of 81

Both Siegfried & Roy are now gone. S&R invented the full length magic show headlining Vegas. A very different style but without S&R there is no P&T in Vegas. Pure showbiz and pure class. He was a team. We are a team. As Tolstoy wrote -Successful magic teams are all the same
Might have to watch Father of the Pride - cartoon series based on their lions, I remember it being pretty funny!

there's been various posts on social media that we should be more concerned with performing arts, music theatre etc than fishing, not just the artists and performers, but all those involved, ticket staff, door staff, roadies, stage hands, bar staff, costume, make up etc.
goverment is letting them down as well, they generate more money, employ more people

What’s more important – the theatre industry, or the fishing industry?Quote:
In terms of employment and economic contributions, the UK’s fishing sector is dwarfed by theatre.


Musicians as well are going to find touring difficult in the future:

I'm not sure if hotukdeals has a tracker for stores with them, but I have seen people post when shops have them available to order again, not strictly speaking a "deal" but useful to some.

Out of interest, why do you want one so soon? There doesn't seem a compelling reason to upgrade yet, unless you just want one, because you want one, which is a good a reason as any :)

Surprised this hasn't been posted, it's worth a watch, quite interesting:

I'm not sure I'd compare recent events to Kristallnacht, but he makes some good points

My dad's been given his injection, it was at a local hospital, but from what my mum said there was volunteers and staff from the Saints Foundation (charity associated with the football club) carrying out the injections etc.

also, this made me laugh:

Quote:
Parents have turned the tables on Gavin Williamson by contacting Ofsted to praise schools and complain about his performance – with the inspectorate being deluged with 5,000 emails since Wednesday.

The act of defiance comes as the education secretary advised parents to contact the watchdog if they feel their child’s school isn’t providing “suitable” remote learning.

Quote:
Si Wooldridge says...
"I know no one else is likely to agree with me, but I really believe that Twitter suspending Trump's account is a really dangerous move with regards to free speech..."
funnily enough these appeared in my inbox earlier, you're not alone:
Quote:
‘Free Speech’ Platforms Are Emerging as Facebook and Twitter Suspend Trump


Quote:
Facebook Chucked Its Own Rulebook to Ban Trump

The move is a reminder of social platforms’ power over online speech — and the inconsistency with which they wield ithttps://onezero.medium.com/facebook-chucked-its-own-rulebook-to-ban-trump-ecc036947f5d


I suppose it's how you interpret incitement to riot etc, and if they wanted to nip it in the bud, but then you start to police ppl on what they might do

and years ago police was advertised as a way to drive fast cars, and the armed forces was an opportunity to see the world.

two things, which up until recently became affordable for almost anyone to do, and what you see on the news happening here and abroad is enough to put off the mildly curious.

I don't think you get many ppl these days fibbing about their age to join the army, they're not as naive as they used to be.

I remember as a kid being interested as my dad had served in the army from when he left school (he left before I was born). However, as I got older and realised i may have to kill someone, i decided it wasn't for me.

Luckliy, there are ppl who join the armed forces and  police for the right reasons, and want to join despite being aware of the big picture. Like nurses, teachers etc, a vocation for some, it's not something some ppl stumble into like they used to, because they couldn't do anything else. 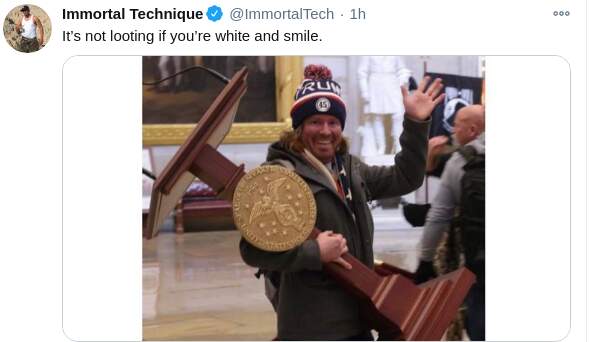 various comparisons to police just letting these guys in, but not long ago BLM protests they were in full riot gear throwing tear gas around

i think my dad was just chosen because of his age, they got a text telling him to phone a number to book an appointment.

I guess it's a postcode lottery on how many ppl are eligible for each round in each area and how many they receive, and staffing levels.

Just had weekly phonecall with my parents, more so that they can speak to the kids, than me, but my dad mentioned that he's getting the COVID-19 vaccine at the weekend, he thought he should probably take them up on the offer even though he hates needles!

I think I'm happier than he is that he's getting it!