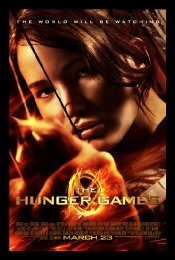 Happy Hunger Games, and may the odds be EVER in your favour...
Review added by
Amie Key
Places to Buy

Based upon a successful teen book franchise, Suzanne Collin's The Hunger Games trilogy has finally made it onto the big screen in an attempt, presumably, to rival the recent Twilight trilogy. Essentially my views on Twilight were that it was just Dawson's Creek with vampires, although admittedly this was after only watching the first film under duress with my daughter as her birthday treat, although I don't think she was quite expecting my snoring in a cinema as part of her birthday present.

Anyway, onto The Hunger Games. It's set in a dystopian future after a huge war in a fictional country called Panem, presumably based on the United States of America. The country is ruled with an iron fist from The Capitol by President Snow (Donald Sutherland) with each of the 12 outlying Districts providing much needed materials. Part of the resolution of the big war is that an annual Hunger Games would be run with each of the Districts providing one boy and one girl between the ages of 12 and 18 to compete in a battle to the death. The eventual winner to return to their District in triumph to live a feted life with all the comforts that can be afforded such a Victor, but their role in life to now mentor new combatants from their District.

This year is the 74th Annual Hunger Games and Katniss Everdean (Jennifer Lawrence) finds herself in the dubious position of volunteering for the Games in place of her sister, who is unlucky enough to be drawn from the lot in her first year of inclusion. Katniss lives in District 12, a rundown mining community, and hunts game with her friend Gale (Liam Hemsworth) in order to feed her family after her father was killed in a mining accident years before. Katniss is a single minded young girl who is both intelligent and headstrong, and is packed off to the Capitol with shy baker's boy Peeta (Josh Hutcherson).

Mentored by previous District 12 winner Haymitch (Woody Harrelson), Katniss finds her profile and popularity on the rise thanks to both his advice and the design skills of Capitol designer Cinna (Lenny Kravitz). Initially resistant to the superficiality of the Capitol and its flamboyantly dressed inhabitants, she slowly realises that raising her profile will gain her sponsors, vital supplies in the arena and boost her chances of winning the contest. What she fails to realise, however, is that Peeta is feeling a little lost due to the attention foisted on Katniss and uses the only thing he feels he has to give him a chance to be more popular, his long held crush on Katniss - which both embarrasses and outrages her.

However, once in the arena and attempting to survive the mass killing, she may have to rethink her strategy in order to survive...

Visually, The Hunger Games is a game of two halves. District 12 is a backwoods rundown town and the arena is also a wooded environment, whilst The Capitol is a massive urban sprawl of impressive architecture and modern sterile technology inhabitated by colourful if rather facile and fickle people - think your typical reality show audience then dumb it down even further and dress them in camp bright colours and make them act like Louis Spence.

I've read the book trilogy that this film is based on and I'm in two minds about this adaptation, despite author Suzanne Collins being involved in the script.

Visually it actually matches in the main what I imagined with The Capitol being virtually exactly as I pictured it. The effects are generally good with the clinical arena operations centre being the highlight for me, although the effects for the dog-like creatures near the finale aren't that impressive and don't feel life-like to me - saying that though, they're manufactured so maybe they're not meant to look real. The superficiality of the inhabitants of The Capitol is rather good, from their dress code to their mannerisms, seeming to be a rather effete city with no pressing concerns other than being entertained.


The acting is also quite impressive, despite my initial misgivings about some of the actors in place. Woody Harrelson actually does a great job alongside an infrequently used Donald Sutherland, more to be seen of both them in future films. I'd actually pictured mentor Haymitch as a bearded drunk fat bloke so was a little dismayed to find Harrelson in the role, but in the context of this fim his preformance worked well. I didn't know anything about Jennifer Lawrence so had no preconceptions of her in the lead role. My major concern was in the actor who was portraying Peeta, the lovelorn partner to Katniss. In my head, I had already pictured him as Sean Astin's Samwise Gamgee so I was initially disappointed to see Josh Hutcherson, but he did ok with what he had.

The problem is that the film just doesn't match the expectations set up by reading the book. Yes, it's actually quite long but in some ways feels rushed. For a start, there wasn't enough emphasis on the contrasts between The Capitol and the outlying Districts, who provide materials to the centre in order to get food and survive. It's called The Hunger Games for a reason, but not enough is made of this bar the initial reaction by Katniss when boarding the train. The social commentary that details the relationship between the ruling Capitol and outlying Districts isn't explored fully, merely hinted at, and therefore the District 11 reaction to an event by Katniss doesn't really work. The contest itself feels rushed as you don't get to understand the various alliances made and before you know it, the Games are down to their last few contestants without you ever really seeing any of  them fall bar a couple. Most unforgivably, the central plotline about the things that people do in order to get popularity and survive is completely glossed over so you don't really get to the truth about the Katniss/Peeta love story, which is the cause of massive internal conflict by Katniss in the book.

Like the ending in the final book, the film feels rushed overall. I'm hoping that the eventual release on DVD/BD shows that there is a Director's Cut out there that addresses some of the issues I have. I'm not convinced but I hope so because like Ridley Scott's Kingdom of Heaven, this is a film that feels cut for the cinema and currently doesn't make as much sense as it should. And it's not as good as Battle Royale either...