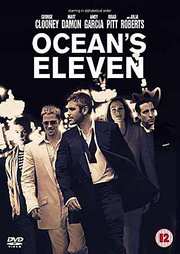 Synopsis:
The plan is set. The rules are clear. If all goes right for Danny Ocean`s drifters, the payoff is $150 million. Divided by 11. You do the math.

The skill of Academy Award®-winning director Steven Soderbergh combines with enough starpower to light up the Las Vegas strip in this classy caper. George Clooney plays Danny, defying the odds in a split-second heist of three Vegas casinos - all owned by a magnate (Andy Garcia) who is dating Danny`s ex-wife (Julia Roberts). A fixer (Brad Pitt), a pickpocket (Matt Damon), a blackjack dealer (Bernie Mac), a flimflammer (Carl Reiner) and others in well-defined roles are with Danny. Are you in or out?

DVD-ROM Features:
In Or Out? Challenge Cuts You In On The Caper
Link to the Original Theatrical Web Site and Other Locations
Log In To Future Online Events

This disk is highly recommended. The film is clever, surprising, slick and entertaining all at the same time. Dream cast, dream director and nicely photographed too.

Just don`t watch it straight after watching `Out of Sight` as George Clooney plays his character in this film virtually the same way. (Also its a shame about Don Cheadle`s APPALLING cockney accent - oops! - it`s not as though there are no British black actors out there or anything.)

The video transfer is anamorphic and good (as you`d expect when New Line Cinema is involved - they produce high quality HD digital masters as part of the post-production process). Contrast and shadow detail is excellent and on first viewing I thought it was one of the best video transfers I had ever seen. Colours are luminous (even verging on over-saturated), black levels are perfect and there is a lot of detail - the aerial shot of Las Vegas was jaw-dropping. No flecks or artifacts of any kind. Unfortunately on a second more critical viewing I can see that in very dark parts of the scene there is some noise in the blacks, and there is also some very minor edge enhancement, including at the top and bottom edges of the image where even the edge between the film and the black letterboxing mask is enhanced! 1 row of pixels at the top and bottom of the image is blurred, and if your system allows it you may want to mask those lines out.

For much of the early part of the film George Clooney wears a sports jacket with a fine checked pattern. On an average system (e.g. full screen TV, budget DVD player, composite video lead) this will produce ugly coloured interference patterns and shimmering which Richard Booth has described in his review. On a decent system (wide screen TV, good DVD player, component video leads ... or HTPC and projector) there is no problem at all with the sports jacket. Therefore any problems you may see with this are NOT problems on the DVD itself and it is a good test of the overall quality of your system.

The soundtrack is crisp and clear at all times, with some good music. There is not a lot of use of the surrounds, it`s really a dialogue-driven film.

Extras include a Director`s Commentary which is the only extra that it is ever worth having anyway, in my view.

Oceans Eleven is a fantastic movie. Danny Ocean has just been released from prision and he rounds up a crew of guys to help him rob 3 Las Vegas casinos, The Bellagio, The Mirage and the MGM Grand. The only trouble is that all 3 casinos are owned by the one person Terry Benedict who happens to to dating Danny`s ex wife Tess. The movie is very funny and there is a lot of action in it. Overall I would give this movie 10/10. The DVD is also very good. It has a whole lot of special features like Audio commentaries and trailers and a bunch of other features. There is scene selections and other languages as well. This is one great DVD which I would recommend to anybody.
posted by LFC_Lad on 13/11/2002 06:51
9 / 10

Brilliant! I never expected much from this but it was highly entertaining, witty and very enjoyable. The suprising thing is that there are no guns, no real violence, no sex, no swearing and it still manages to be one of the best films of last year.
This is one the whole family can watch over and over again. The plot is alright, the acting inspired (you can see they all bonded and had fun doing the film), the soundtrack ultra cool, the editing sharp. The major plaudits go with the Director, Steven Soderbergh. This is his movie and after Traffic, he relaxes and enjoys himself.
The DVD is fairly cheap and effective and this is one film definitely worth buying. It will become a favourite amongst the public.
posted by morpheus177 on 23/1/2003 18:16
8 / 10

"Ocean's Eleven" is cheer popcorn entertainment. But, it's classy popcorn entertainment pulled off with an intelligence, wit, flair and delight completely devoid of the majority of "block busters" nowadays. A simple heist movie at heart, but it contains enough twists (I didn't actually get some of these till I listened to the commentary) and turns to compel you. But I'm sure it was the all-star cast that garnered most of that $500million worldwide gross (and the fact that it was a good movie) and not the plot. The cast genuinely seem to be having fun and so will you. What amazes me is that with eleven protagonists and two other main characters is how well each is written and portrayed. Each character is his own and with the exception of two brothers, they are all different and well defined. Steven Soderbergh a director I never really thought deserved his praise, deserves it here. He directs the film fabulously with gorgeous visuals and frantic pace.

Video: Though not a reference title, this is another high standard 2002 release you've come to expect from DVD. As benefits such a recent film, the transfer is pristine with nary a blemish, scratch or grain in sight. Overall picture sharpness is excellent and compression is dealt with fairly well. I will add my voice to the controversy over Mr. Clooney's sport jacket at the beginning of the film. I've have watch this scene on my DVD player, my computer (with HD monitor) and my brother's laptop. On all formats I got that simmering effects on the jacket. But this only happens in the one scene so it isn't a big distraction.

Audio: Though not demo material this is a very good DD5.1 mix. As standard with any new big budget film the soundstage is expansive and absorbing with high fidelity and no noise or crackle. Dialogue is always clear with the exception of Don Cheadle's appalling "Cockney" accent. There are few explosions or gunfire in this movie (what a nice change), but what little there are of are handle well. David Holmes' score and soundtrack is superb and works off the up-tempo pacing of the film extremely well. Most of the bass is emitted from this.

Extras: This is a Warner's release, so there's nothing copious or groundbreaking on it. However, we get two fantastic commentaries, one a filmmakers' commentary with director Soderbergh and screenwriter Ted Griffin. Secondly, a cast commentary with Matt Damon and Andy Garcia, with Brad Pitt thrown in for good measure. Both commentaries are informative, funny and very enjoyable. As a person who appreciates who's behind the camera rather than who's in front of it, I found the filmmaker's track to be better. But it doesn't really matter because both are superb.

Up now is the first of two featurettes, "The Making of Ocean's Eleven", which lasts 15 minutes is essentially a PR fluff piece with the cast and crew saying how good the movie is and why we should see it. There is no barely any production information in it. Much better is the 8-minute piece, "The Look of the Con" which delves into the costume design of the movie.

Also included on the disc are 3 trailers and a flash-based DVD-ROM game.

Overall: I'm not a fan of remakes, usually because the films being remade are usually classics and have no need to be remade. "Ocean's Eleven" however, was never a great film and has been vastly improved this time out. If I had one complaint about the film it would be the swearing. There are three f-words in the film and not one is called for or necessary for the scene. These could have and should have been removed to make a more family orientated movie. Disc wise the presentation is strong and the commentaries are great, but the lack of video-based supplements lets the disc down. Still, and for the price they're asking this DVD is highly recommended.
posted by directorscutIMDb on 2/3/2003 14:22
9 / 10

MOVIE
I`m a big fan of George Clooney as I just love his laid back acting style. I go and see most of the films that he is in, on account of that luckily, all of them are absolutely brilliant to. What a bonus. This film is no exception, and again sees him team up with good friend Steven Soderbergh. It also happens that the director has managed to get one of the best ensemble casts ever seen, and all good too. All of them put in quite laid back preformances, as this is how all the characters are, and all of them look as if they are just having loads of fun. Brad Pitts character, Rusty is a little underused, and Julia Roberts part, although necessary, isn`t great either. Luckily Elliot Gould and some of the older stars are brilliant. Also luckily, this is probably the coolest movie you are ever going to see. The editing, the sets, the music, the camera shots, the story, everything is just perfect. The gathering of the Eleven is full of sparkling fun moments, such as the twins truck race. Then, it all culminates in the heist it self, just a pure slick set piece. The heist can confuse at times, but this just puts it in another class.

VIDEO
This isn`t the best picture transfer I have ever seen. At times it seems like a rather soft picture to me. There are points when George wears his jacket there is a slightly odd effect, but I don`t know if this is due to a poor transfer or if it couldn`t be helped. Still, on the whole, colour is quite good, and blacks are quite good also. Detail however, is absolutely fine.

AUDIO
The sound is, on the other hand, brilliant. Some of the film is very dialogue based, and this is all very clear. There are some good surround effects at times, and overall, there are no problems with this track.

EXTRAS
A little on the light side with extras. No deleted scenes, and on a film where the cast clearly had a ball, there was clearly a missed opportunity for a wonderful behind the scenes documentary, rather than the light HBO one we do get. I would have loved to hear all about the pranks Clooney pulled! The two commentaries are very good, both the cast and directors one. The costume feature is OK, but the only other feature is a quite diverting little flash game that I enjoyed actually. It was worth the one play.
posted by cartoonjonah on 7/6/2003 23:08