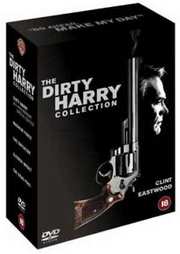 Synopsis:
Dirty Harry
Harry Callahan is a tough, streetwise San Francisco cop who they call Dirty Harry. In this action classic, you`ll see why - and also why Clint Eastwood`s reputation as a premier film star and moviemaker is secure.

A rooftop sniper (Andy Robinson) calling himself Scorpio has killed twice and holds the city ransom with the threat of killing again. Harry will nail him, one way or the other, no matter what the `system` prescribes.

Filming on location, director Don Siegel made the City by the Bay a vital part of Dirty Harry, a practice continued in its four sequels. Thirty years after its arrival the original remains one of the most gripping police thrillers ever made.

Magnum Force
Underworld figures are being murdered all over San Francisco. One by one, criminals who have eluded prosecution are getting the justice they deserve, justice you`d think Detective Harry Callahan might approve of with a tight-lipped smile. But if you think so, you`ve misjudged Harry - and so have the killers.

Written by future directors John Milius and Michael Cimino, this Dirty Harry sequel stars Clint Eastwood in his signature role of Callahan, here facing an unexpected kind of lawbreaker: one who carries a badge. Sharpshooting rookie motorcycle policemen have turned vigilante. Their real enemy is the system. But the system is what Harry is sworn to protect. And he does - with Magnum Force.

The Enforcer
When detective Harry Callahan stops a liquor store hostage standoff in his own no-nonsense way, he gets busted back to personnel. But not for long. When terrorists rob an arms warehouse and go on a blood-soaked extortion spree, San Francisco`s leaders quickly seek out Callahan: The Enforcer.

Clint Eastwood takes dead aim again in this third of his five Dirty Harry films. Presaging her four-time Emmy-winning stint as half of TV`s Cagney and Lacey, Tyne Daly co-stars as Harry`s new partner, who has two jobs: nailing the terrorists - and winning hard-boiled Harry`s confidence. Stoked with brisk humor and hard-hitting mayhem The Enforcer carves another winning notch in the handle of Harry`s .44 magnum.

Sudden Impact
Sensitive to outcries of police brutality, the superiors of San Francisco Detective Harry Callahan have sent him on an out-of-town assignment until things cool down. But wherever Harry goes, things just get hotter.

Clint Eastwood hits the mark again in Sudden Impact. Callahan`s older, dirtier and the world hasn`t gotten better. Which means this fourth Dirty Harry movie (which Eastwood also directs) is explosively exciting, as Callahan tracks a traumatized rape victim (Sondra Locke) coldly gunning down her bygone attackers. Through the five Callahan films, the lawman always struck a powerful chord. But Sudden Impact is particularly potent, fueled by the line that became a national catchphrase: `Go ahead. Make my day.`

The Dead Pool
Fame isn`t detective Harry Callahan`s style. He dislikes being grouped with a rock star, a film critic and a TV host, all slain clebrities in a macabre betting pool called the Dead Pool. Another name just got added and it`s his.

Clint Eastwood returns for his fifth Callahan caper and this time his new partner is a Karate whiz, mafia goons have sworn to snuff him. And in the most amazing San Francisco chase since Bullitt, Harry puts the pedal to the metal to outrun a bomb carrying, Radio controlled toy car.

It`s also a great showcase for future stars Jim Carrey, playing an ill-fated rock musician, and Liam Neeson as a power-tripping Director. For hard-hitting action, dive into this cool pool!