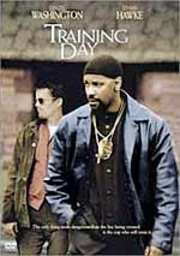 The only thing more dangerous than the line being crossed, is the cop who will cross it
Certificate: 18
Running Time: 117 mins
Retail Price: £15.99
Release Date:
Content Type: Movie

Synopsis:
Rookie cop Jake Hoyt wants to stop crooks, not become one. But staying on the right side of the line that separates cop from criminal will be more challenging than anything he`s faced. Because Hoyt`s senior partner for the next 24 hours is Alonzo Harris, an undercover narc meaner than any of L.A.`s mean streets.

In a powerful departure from his frequent good-guy roles, Denzel Washington plays Harris, the twisted but charismatic detective who both attracts and repels as he becomes the kind of thug he`s supposed to collar. Ethan Hawke plays unseasoned recruit Hoyt. And Antoine Fuqua (The Replacement Killers, Bait) directs, guiding a cast that includes music stars Dr. Dre, Macy Gray and Snoop Dogg. Training Day. It`s a day of reckoning.

Excellent film. Denzel Washington excels as the corrupt undercover cop Alfons and Hawke also turns in a suprisingly good perfomance. Antone Fuqua`s direction is good and I`m sure he`ll make many more great movies. The locations are all real ghetto`s and there are some satisfactory performances from rappers Dre, Snoop and also Macy Gray.

Theres a featurette with interviews, but Washington and Hawke are absent from this. The directors commentry is fascinating with plenty of intriguing stories about the shoot which I enjoyed. A couple of music vids are also included.
posted by Rich_H on 27/8/2002 17:04
7 / 10

I still haven't fully made up my mind as to how much I liked this film. I certainly think that it is a good film, I'm just not sure if it's a fantastic film or not. It is certainly original and is not a standard Hollywood affair. Both leads, Ethan Hawke and Denzel Washington, give excellent performances, neither of which I could fault in anyway.

The disc itself is well presented. The menus are easy to use, the video and audio are both excellent. The music used really contributes to the film and helps the mood of the film in just the right way. We are also treated to small parts from Dr Dre, Snoop Doggy Dogg and a surprisingly good Macy Gray.

Extras wise - we get quite a few. There are 10 minutes of deleted scenes which are mostly between Washington and Hawke building their characters. They are not particularly bad scenes, but they don't add anything crucial to the film. The alternative ending takes the original ending and just adds a scene between Hawke and the "3 wise men", and really doesn't change much in the film.

There is a 15 minute making of which has interviews with cast and crew (including Washington and Hawke). The first half mainly deals with the issues surrounding Washington's character, but then goes into some typical backslapping, which spoils it slightly. There is also a director's commentary that I haven't listened to, I'm afraid, 2 music videos, and a trailer. The menus are unoriginal but easy to navigate.

Altogether this is quite a well put together disc, and the film itself benefits from 2 outstanding performances from its leads. For me this film does not get into the "fantastic film" category, but it really is not my usual kind of film and I was actually surprised at how much I liked it. It's extremely well done, and well acted, with a pretty good disk - I'm just not sure that it's to everyone's taste - but it's well worth a try!
posted by Rich Davies on 13/9/2002 06:37