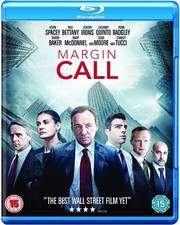 What better way to leave you for the weekend than with news of a film featuring an Oscar nominated screenplay? Paramount Home Entertainment have announced the release of Wall Street thriller Margin Call, starring a pretty amazing cast and coming on both DVD and Blu-ray this 12th November.

With a recommended retail price of £12.99 for the standard, and £19.99 for the hi-def version, extras will include deleted scenes, some with commentary, a photo gallery, Revolving Door: Making Margin Call featurette, and Missed Calls; Moments with Cast & Crew featurette.

Set in the high-stakes world of the financial industry, an edge-of-your-seat thriller entangling the key players at an investment firm during one perilous 24-hour period in the early stages of the 2008 financial crisis.

When entry-level analyst Peter Sullivan unlocks information that could prove to be the downfall of the firm, a roller-coaster ride ensues as decisions both financial and moral catapult the lives of all involved to the brink of disaster.