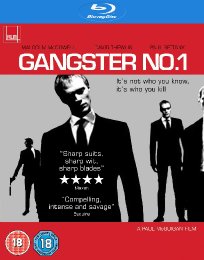 Synopsis:
This classic drama features one of the most chilling and a horrific violent scene as it tells the story of a cold-blooded young gangster living in the 1960s. Directed by Paul McGuigan, his debut movie is influenced by Kubrick and is a British cockney masterpiece following the rise and fall of a prominent and particularly ruthless English gangster. Stylistically daring and often terrifying Gangster No.1 boasts an exceptional cast of Malcolm McDowell, Paul Bettany and David Thewlis. Set around a middle-aged, unnamed crime boss (McDowell), he smugly reflects back on his life, narrating the brutality which made him triumphant - and feared. A young hood in Swinging 60's London, he copied his mod boss Freddie Mays (Thewlis). However his narration exposes a burning envy towards Freddie and his supremacy, leading to a vicious and backstabbing scheming to become Gangster No.1.