Article
David Suchet returns as Poirot in January on DVD 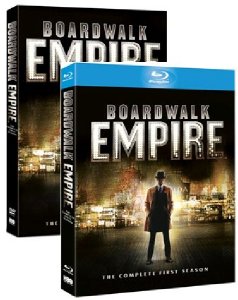 HBO Home Entertainment is proud to announce the critically acclaimed, epic crime drama BOADWALK EMPIRE: The Complete First Season will be available to pre-order online from Friday 14 October 2011 ahead of its release on 9 January 2012.

Steve Buscemi (Armageddon, The Big Lebowski) stars in this explosive HBO drama series set at the dawn of the Prohibition era, when the sale of alcohol became illegal throughout the United States. Charting the birth of organised crime, the series chronicles the life and times of Enoch 'Nucky' Thompson (Buscemi), the Atlantic City treasurer whose double role as politician and bootlegger makes him the most powerful man on the Boardwalk.

Set in the 1920's, the visually stunning BOADWALK EMPIRE has some of the most awe-inspiring production design ever seen in a television series, outstanding sets and features a 20's soundtrack that sets the scene taking you back to an authentic gagster-fuelled era.

Available to pre-order online from Friday 14 October 2011 at amazon, play.com & hmv.co.uk, BOADWALK EMPIRE: The Complete First Season will be released on DVD and Blu-Ray in a 5 disc box set on 9 January 2012.