DVD
In The Loop

Blu-ray
In The Loop 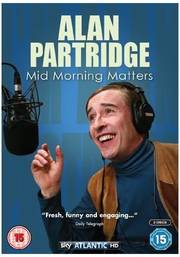 So, a while back now, 2010 to be precise, Steve Coogan's best loved character creation Alan Partridge made a welcome return to form with a web series funded by the Foster's lager people. Twelve episodes of 11ish minutes were streamed over the interwebs for our entertainment, and this year saw them re-edited into six TV shows for Sky Atlantic.

Written by Coogan, along with Neil Gibbons, Rob Gibbons and Armando Iannucci, further episodes are being shown as we speak over at Foster's Funny, whilst the previously TV screened versions Alan Partridge: Mid Morning Matters will turn up on DVD this 12th November.

With a runtime of 150 minutes, this release will carry a recommended retail price of £20.42.
As well as the TV edits, it also features the original web 11 minute versions and outtakes.

Once the king of TV talk shows, Alan now hosts Mid Morning Matters, a weekday local radio show at North Norfolk Digital which is beamed via studio webcam to a (potential) audience of billions.

In this hilarious and critically acclaimed series, Alan and his sidekick Simon courageously tackle the burning issues of the day; childhood obesity, popular TV prostitutes and how often you should wash your towels, and prove beyond doubt that mid-mornings matter.