Article
Angels and Demons out in September 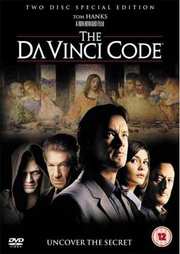 Synopsis:
Famed symbologist Professor Robert Langdon (Tom Hanks) is called to the Louvre museum one night where a curator has been murdered, leaving behind a mysterious trail of symbols and clues. With his own survival at stake, Langdon, aided by the police cryptologist Sophie Neveu (Audrey Tautou), unveils a series of stunning secrets hidden in the works of Leonardo Da Vinci, all leading to a covert society dedicated to guarding an ancient secret that has remained hidden for 2000 years.

Special Features:
The Codes of The Da Vinci Code Feature - discover the hidden codes within the film
First Day on the Set with Ron Howard Featurette - Director Ron Howard introduces the film and the excitement of beginning production at the Louvre in Paris
A Discussion with Dan Brown - Featurette on "The Da Vinci Code" author Dan Brown
A Portrait of Langdon Featurette - Who is Robert Langdon? How was Tom Hanks chosen to play this iconic character? How did Tom Hanks become the character? What do Tom Hanks and Langdon have in common?
Who is Sophie Neveu? Featurette - The long and challenging journey to the casting of Audrey Tautou as Sophie Neveu, including the actress` screen test with Tom Hanks
Unusual Suspects Featurette - The international cast - Colourful, memorable and frightening characters
Magical Places Featurette - A fascinating and surprising discussion about the cities and places that were chosen for the film locations
Close- up on Mona Lisa Featurette - Ron Howard, his cast and colleagues share their experience working next to one of the most famous paintings in the world
The Filmmaking Experience 2-Part Featurette - Ron Howard discusses his collaboration with his Director of Photography, the challenges faced by production and the excitement of bringing the book to the screen. Includes a DVD exclusive look at filming the last and revealing scene
The Codes of `The Da Vinci Code` Featurette - Discusses the hidden codes and symbols in the film. Isolates images from the film, giving the viewer clues over time as to what they mean, eventually giving a detailed description of what the imagery was intended to mean
The Music of "The Da Vinci Code" Featurette - Overview of creating the music for the film

Since the good people of DVD Reviewer no longer upload new titles for visitor reviewers, I`ll write this review here, although it applies to the Da Vinci Code gift set.
The bestseller novel of Dan Brown gets a truly beautiful and adequate version for the big screen.
The script managed to keep most of the good stuff from the book in, while tossing away all the unnecessary clues and riddles, leaving us with almost two and a half hours of thrills and pure fun!
The casting of the main characters is spot on! Annoying Hanks is surprisingly good as Langdon, and Tautou is perfect as Neveu.Bettany`s Silas is simply outstanding, too.
The video transfer is excellent. There are no compression signs at all the visuals are stunning, both the CG and the real shots.
The DD 5.1 soundtrack is excellent. The surrounds are constantly (yet not violently) used and help create a very real touch to the audio.
The menus are beautifully animated with sound.
The extras include a detailed behind the scenes featurette, a featurette about the codes in the movie and replicas of Langdon`s notebook and the Cryptex.
Bottom line - one of the finest books ever gets a hell of a treatment with the movie and this superb DVD. Recommended.
posted by Zvi Josef on 26/9/2007 19:30