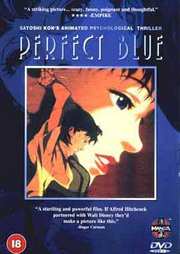 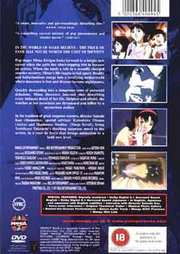 Back Cover of Perfect Blue

Satoshi Kon first came to prominence in the West with Perfect Blue, an anime film with a difference. It made its way onto VHS in the late nineties, and Manga Entertainment put it onto a shiny disc for the first time in 2000. And then Satoshi Kon slipped away from public attention, the anime equivalent of the one hit wonder. He was still working in Japan though, with his next feature Millennium Actress completed in 2001, and more recently Tokyo Godfathers. This year he came back to prominence however with the release in the West of the acclaimed Paranoia Agent television series, as he once again revisits the themes of paranoia and anxiety in perception altering experiences.

Perfect Blue is being released by Manga in a Satoshi Kon Double Bill, next to Millennium Actress. It`s also available individually. Unfortunately, the Perfect Blue disc is the same disc that was released five years ago, and is beginning to show its age.

Mima Kirigoe is a pop idol with Cham, but Mima wants more than this, and decides to branch into acting, quitting the band. Her first role is a minor one in a detective drama, but when her agents ask for her role to be expanded, the writers oblige by writing an exploitative scene where her character is assaulted in a nightclub. It means the end of her wholesome pop idol image, but she feels obligated to the writers. But there are some out there who don`t want to let the pop idol go, and as Mima makes one bad decision after another, she begins to be haunted by the image of who she used to be. Then the scriptwriter who tainted her image is murdered. 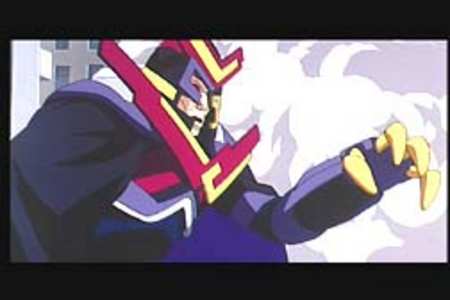 And this is where age catches up with Perfect Blue. This five-year-old disc boasts a 1.85:1 letterbox transfer. The image is clear for the most part, but there is the occasional spot of print damage, and the lower resolution means that there is some softness. I also noticed a few digital artefacts around fine detail and some blurring. The animation itself is excellent, although this isn`t a film that presents you with fantastic imagery from the outset. Perfect Blue is a story told in the real world, and as such the characters and the world they live in are depicted with almost minimalist realism. It makes the way the story unfolds all the more effective. It really is a shame about the image format, as this would have been an ideal opportunity to release an anamorphic version. 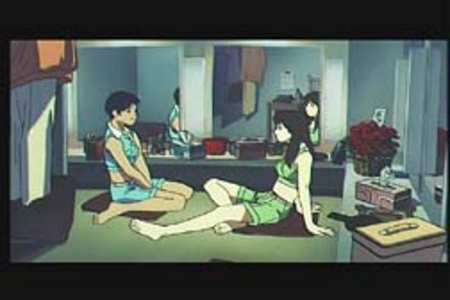 You have a choice between DD 5.1 English and Japanese, as well as a DD 2.0 English Stereo track. Contrary to the packaging, there is no Japanese Stereo track however. It doesn`t matter though, as the sole Japanese track is more than satisfactory. The dialogue is clear and the surrounds are used to subtle effect in relaying the ambience, and when the story requires it, an unsettling feel that is matched by the haunting theme from Masahiro Ikumi. The English subtitles are zoom-friendly, and it seems that they are the translated subtitles, although they do follow the English dub quite closely. I had a quick listen to the English dub, and the cast seemed to suit their roles as well as the Japanese voice artists. 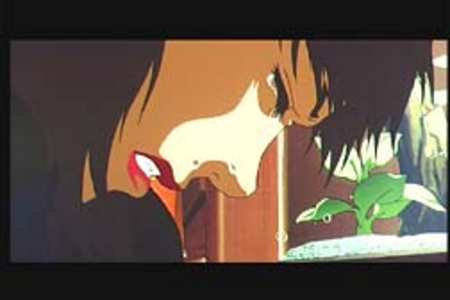 Animated menus, a chapter insert and a booklet advertising other Manga releases, as well as MVM`s Paranoia Agent.

The extras on the disc are all hidden away in Mima`s Room, and in a nod to the plot point in the movie, they are presented as a website.

Cham lets you watch their audio track being recorded in the studio, as well as listening to the English version of the same song against a still from the movie. This lasts 9 minutes.

Some Photos I Took is a 3-minute slideshow that has stills from the film, with captions putting them in context. If you feel like it, you can watch the film instead.

My Favourite Videos shows the age of this disc. For 4 minutes, you can watch a trailer for other Manga Entertainment releases that are, or rather were available on VHS in 2000.

My Favourite DVDs does the same thing, but presents 9 pages of text for Manga titles that were available on the shiny disc back then.

Meet Some Of My Friends contains the interviews. The 3 English interviews are voiced over clips of the film, and include chats with Ruby Marlow, who talks about dubbing Mima, Wendy Lee who voiced Rumi, and Bob Marks, who talks about voicing Mr Me-Mania. Then there is a 6-minute chat with Junko Iwao, who talks about how she was cast for the role of Mima, as well as her impressions of the character. This is a live interview, and is subtitled (burnt in) in English. Finally there is an 11-minute interview with director Satoshi Kon, who talks about directing his first animated feature, as well as the story he intended to convey.

My favourite links point to Manga.com, Perfectblue.com and Sputnik7.com. Click on these links and you`ll play trailers for the relevant company/movie.

To round it all off, there is a page of DVD credits. 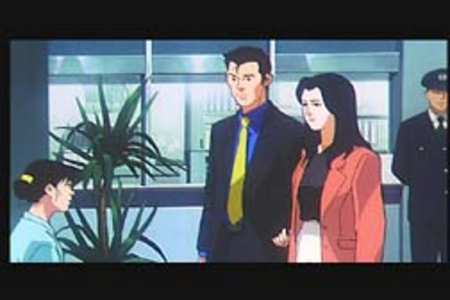 Perfect Blue is an absolutely gripping psychological thriller. There is also valuable social commentary on the fickle nature of fame, and the effect it has not only on those seeking fame, but also on those who allow their fanatical adoration of idols to turn into all consuming obsession. That it is an animated film is almost an afterthought. The reality of the characters and the way that the story develops is such that very early on, I found myself engrossed in the unfolding events, and had completely forgotten that the film wasn`t live action. This is less a comment on the quality of the animation, although it is of a uniformly high standard, rather than acknowledging the strength and power of the storytelling.

Central to the story is Mima, the young pop idol that wished to become an actress. There is an initial ambiguity as to whose idea it is, with her agents believing that an increase in her public exposure can only be a good thing. She soon embraces the idea though, and wholeheartedly throws herself into her new career. It isn`t easy of course, especially when her new peers and colleagues look down on her because of her pop background. Her agents work to get her role expanded, but it comes at a cost. She has to portray a character that is raped, in a scene that verges on the exploitative. She`s reluctant of course, but feels obligated to her agents. It`s such a change from her previous image that the emotional pressure becomes too much to bear. From the opening scenes of the film, the story is told in such a way to set up a contrast between the public pop idol image of Mima and the private individual. This contrast becomes real for Mima when she starts being haunted by the pop idol image of her former self. As she continues to make bad decisions, her former self begins to taunt her, accusing her of selling out. It`s when it appears that this ghostly image can affect the real world that Mima begins to break from reality.

The film isn`t so simplistic as to paint a convenient exploitative villain. Mima`s agents do have her best interests at heart, and they realise that both they and Mima have to sacrifice her former image to succeed at her new career. While Tadokoro is implicit in the choices presented to Mima, he does profess reluctance when it becomes too exploitative. He recognises that it is the way the industry operates. Far more sympathetic to Mima is her other agent Rumi. Being a former pop star herself, she understands what Mima is going through. It`s one of the film`s more moving scenes when they are filming the rape, and Rumi realises just what she has done to her client.

The nature of fandom is revealed in the incidental moments of the film, as people gossip and spread rumours about Cham and Mima. It`s the sort of opinion that fills many a tabloid and is relatively innocuous. Fandom becomes more serious though, when Mima learns that she has a website in her honour. It should be ringing alarm bells when she sees that it chronicles the intimate and mundane events of her day-to-day life, as well as her inner feelings. She`s hardly computer literate though and as her reality begins to crumble, the website begins to reflect the pop idol self rather than who she wants to be. That she has a stalker is evident, someone who obsesses about the pop idol and doesn`t want that to change. When Mima announces that she is leaving Cham, the stalker becomes fixated on preventing that, and the lengths that he pursues grow more and more extreme.

Perfect Blue is one of the best thrillers that I have seen in years. It`s a story that draws in the viewer, is both unsettling and moving, and challenges the perceptions. The story is tightly plotted, and the climax had me at the edge of my seat. Unfortunately the disc is five years old now and getting long in the tooth. Perfect Blue is calling out for an anamorphic transfer. But while the disc may not be perfect, the film most certainly is.