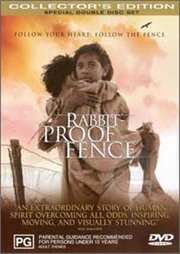 DVD
His and Her Circumstances Complete Collection

According to this film in the early 20th Century and up until 1970, Australia had a policy of taking half-caste Aboriginal babies away from their mothers and bringing them up communally. They were trained as servants and farm hands. The idea was to prevent them marrying their own people and eventually breeding out the `native`.

This story is about one of those children. Although captured by the authorities and sent to the Moor River Settlement Molly decides she will go home. She takes her sister and cousin and sets off to find the rabbit- proof fence. The fact that it would be a journey of 1500 miles did not put her off.

The `rabbit-proof fence` was constructed to attempt to keep the rabbits away from the farmland. It formed a boundary that ran across and down Australia. Molly`s home, Jigalong, was alongside the fence.

The film follows the three girls as they attempt to outwit the native tracker and the police to `follow the fence`. Their journey is followed closely by Mr Neville, the Chief Protector of Aborigines, who does all he can to recapture them.

The casting is very interesting. The three young leads produce consummate performances beyond their years and none of them had any previous acting experience. The mothers are also first-timers. They are ably supported by more established actors. David Gulpilil, previously seen undertaking a journey of his own, in Walkabout, plays the native tracker. He says very little but his daughter is also a resident of Moore River and he forms the emotional bridge between the children and the authorities. Kenneth Branagh as Mr Neville, The Chief Protector of the Aboriginal People is responsible for the welfare of the natives. He gives an understated performance that is chilling in its simplicity. The very mundane nature of his role is familiar from his recent appearance in the TV production of `Conspiracy` where the Nazis discuss the final solution around the dinner table.

The film is based on a book written by Molly`s daughter, Doris Pilkington. The screenwriter, Christine Olsen hounded Phillip Noyce by phone until he agreed to read the script. The rest, as they say, is history.


Philip Noyce has established a reputation for Hollywood action movies. However this film indicates a move into subjects that interest him more keenly. He is dismissive of Hollywood as a place that makes the movie fit the face rather than a movie for its own sake.
His other film last year just happened to be `The Quiet American`. He sure had a busy 2002.

The film looks really good. The Region 4 version is presented in anamorphic Widescreen (2.35:1) and also 6:3. This is an excellent transfer with good use of the palette ringing the changes through different scenes. Many of the scenes particularly where the girls are taken away by the constable have a raw feel like documentary footage.

The commentary again goes into quite a lot of detail about how the look of the film is separated into distinctive sections.

Much of the film takes place in the wilderness through which the girls had to trek to find their way home. Noyce has used cinema trickery and a different part of Australia to recreate the vastness of the Australian bush. The challenge for the film is not to allow the scenarios to become monotonous as the journey was just so long.

He has created an episodic format that concentrates the action into shorter scenes and of course the journey that took several weeks into 90 minutes. The commentary explains how each part of the film was approached in a different way by the cinematographer Chris Doyle. There is even use of CGI where the landscape, actors and even the apparent time of day have been digitally manipulated.

Peter Gabriel and his collaborators have constructed a superb soundtrack of apparently native music. It is elegiac in its simplicity and reinforces the sometimes quite sparse dialogue. It is used to particularly intense effect in the abduction scene.
The sound is in 5.1 and is subtle rather than intrusive.
This is really excellent and well thought out fitting smoothly into the film. It should stand up well as an album.

There are quite a few extras on the Region 4 disc.

Director`s commentary by Philip Noyce.
The commentary really is a commentary for the most part with mostly the Director aided by members of the cast and crew. It covers the inception of the piece, his frustration with Hollywood and also his real concern about whether it was his place to make a film about this subject.

This covers the search for the three leads who would make or break the movie. The part of the youngest was recast six days before shooting started and Everlyn Sampi`s fear about whether she would be able to do it. The scene of the abduction of the children was as traumatic to make, as it is to watch.
This really is an excellent documentary that follows the process of making the film.

Some repetition here particularly with Kenneth Branagh`s comments but he was only on set for 10 days.

Text screens of detail of the major characters and crew

Available through DVD-Rom feature. My computer wouldn`t play this feature but you will probably be able find enough information on the internet without using this disc.

Concerning a period of recent history that deserves to see the light of day this project has been addressed in a suitably respectful way. I found it a very emotional film to watch. Bearing in mind this is something done by the Government of a civilised country to its own people. There is a slow build to the abduction by the constable and that scene will have you leaping up in anger. Repeat viewing does not water it down-it really doesn`t look like acting-and the commentary is a useful and entertaining addition. I found it a very compelling film that not only opens up debate about Western interference in established cultures but also presents an example of amazing courage and resourcefulness that people are able to find when faced with overwhelming odds.

This Region 4 version is playable on Region 2 and was a bargain on the net before Christmas at around £9 including postage from Australia. It is available in other places too.
The early (for us) transfer to DVD really is a bonus. The Director`s Commentary and the `Follow the Rabbit Proof Fence` documentaries offer an excellent insight into the history and how the film came to be made.

The disc itself has been transferred well and also has excellent sound reproduction with the superb Peter Gabriel soundtrack.

I bought it because I missed its brief outing at the cinema and it cost less than the price of two cinema tickets. It is an important and moving film-show it to your children too-it should not be hidden history.