DVD
Fast and the Furious, The (UK)

DVD
Fast and the Furious, The (Collector`s Edition) (Australia) 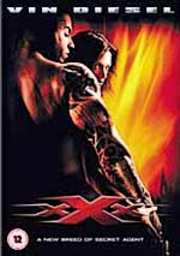 Synopsis:
This amped action drama stars Vin Diesel as Xander (aka Triple X), a rebellious extreme sports star with a mission to defy authority and create anarchy. In the dramatic opening scene of the movie, Xander pulls an outrageous series of stunts with the help of a band of similar-minded jocks, broadcasts the whole event live onto the Internet with a network of strategically placed digital cameras, and then avoids being captured by the squadron of police who pursue him. When Triple X is later taken into custody, Gibbons (Samuel L. Jackson), a representative from a government agency, hires the chiseled athlete and turns him into a secret agent with a mission to travel to Prague and collapse a dangerous terrorist cell operated by Yorgi (Martin Csokas) and the seductive Yelena (Asia Argento).

Triple X is quickly drawn into Yorgi`s lair, a stunning chateau situated in the mountains that is equipped with every high-tech modern amenity imaginable, along with a sizeable team of extra-large Slav bodyguards, a laboratory staffed by top scientists, and an always-ready gaggle of gorgeous concubines.

The movie has a lot of adrenaline rushing stunts, fabulous settings, nice girls and lots of neat gadgets. But thats about it. A typical Bond movie, you might think. The film fails to deliver plotwise. The final showdown is a bit lame. Vin Diesel fails to convince as an action hero and the acting is quite poor. All that said, the film does have some really cool and entertaining moments and that is really what action movies are about. However these moments are fairly limited.

The picture quality is quite good but nothing more than you`d expect from a new hollywood release. The colours are vibrant and the transfer is fresh and clean from any grain.
The sound is also a really great DD5.1 The soundtrack is awesome and is showcased well.

There are plenty of extras on the making of, deleted scenes, storyboards, commentary and stuff. Other promotional material. Some of these are quite decent, analysing the stunts and special effects but some of the extras are totally useless and stuff repeats itself. You could say that the movie and the extras are advertising Vin Diesel.

Overall a typical action flick presented well on a good disc. If you like the movie then this dvd will suit you well. If you havent seen the movie, I would recommend renting it as it is nothing special, just your typical action movie, overloaded with stunts.
posted by dicanio on 9/2/2003 21:15
8 / 10