Review of Pirates of the Caribbean: The Curse of the Black Pearl
added by
Mark Oates

Review of Pirates of the Caribbean: The Curse of the Black Pearl
added by
Jitendar Canth

Review of Pirates of the Caribbean: The Curse of the Black Pearl
added by
David Beckett
Places to Buy

DVD
Enemy of the State (UK)

Pirates of the Caribbean: The Curse of the Black Pearl (UK) 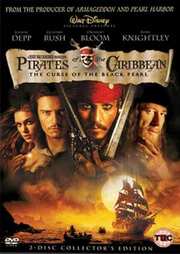 Synopsis:
Pirate Jack Sparrow (Johnny Depp) is enlisted by Will Turner (Orlando Bloom) to rescue his beloved Elizabeth Swann (Keira Knightley) from the clutches of the villainous Barbossa (Geoffrey Rush) and his crew of cursed shipmates. The Pirates of the Caribbean is a thrilling, old fashioned seafaring swashbuckler, based on the Disney theme park ride.

"You best start believing in ghost stories.... You`re in one."

No, there is no concrete evidence, no direct action or actions, in the film to indicate that Depp`s character in "Pirates of the Caribbean: The Curse of the Black Pearl" is gay. He`s supposedly a little mad. There are, however, any number of suggestions...a swishing gait, suspect looks, and effeminate mannerisms in his portrayal...to lead one to the conclusion that Depp`s character is anything but your average pirate. Depp has said his inspiration came from observing rock star Keith Richards of the Rolling Stones, but surely it`s more than that. The Disney people apparently were not initially pleased with his performance, but thank goodness they didn`t mess with it too much.

Not that an outright gay pirate would have been a bad thing. Indeed, considering that seafaring men were cooped up together aboard ship sometimes for months at a time, there`s no doubt that any sort of behavior occurred. But avast, not in a Disney film!

"Pirates of the Caribbean" is a tad too long, but it`s an awfully fun ride, with an extremely good performance from Johnny Depp. Disney`s 2-DVD set is a great package, with excellent audio/video quality and lots of supplements. Highly recommended.
posted by Aslan on 1/12/2003 12:34
10 / 10

Introduction
Its a Disney film, about Pirates, based on the disneyworld ride "Pirates of the Carribean".
Now - put together those 3 items, Disney, Pirates, theme park ride... ok. Already the words "Cute", "Spotty kid", "Saves the day", "Remorseful pirates" "Happily ever after" leap into ones mind like a salmon chased by a cute brown bear. Your already thinking "hmm - possible birthday present for the 8 year old nephew". STOP! Reset!

Luckily, nothing could be further from the truth.

The Plot
When you think back, possibly the plot is probably all too obvious - well certainly nothing mold breaking. Its the details that lifts this film .

The Cast
Johhny Depp gives a truly brilliant performance as Captain Jack Sparrow. He is just not what you would expect as a main character.
From his first entrance, stepping off his sinking ship with perfect timing, to his final departure. You have to keep watching him as you are never sure what he`ll do next. He`s unpredictable, and unconcerned by everything, even with a noose around his neck, or a sword in his chest he, is faintly suprised, but not overly concerned.

Orlando bloom plays a fair hero, but for my money, is well overshadowed by Depp, and doesn`t quite have the sparkle he does in the LOTR epic. Keira does extremely well for one of her first big movies.

This is not a childrens film, and I know of a couple of young children for whom the scary scenes were too much and they couldn`t cope. I doubt it will give adults nightmares, but as I think I said, this is not traditional cutesy Disney!

The Visuals/Audio
The audio is great, I tried both DTS and the 5.1 tracks, both are crystal clear with good use of effects. Is it me, or has some of the music style been "borrowed" from Gladiator. Well I guess H. Zimmer can if he wants.

The video is also nicely done. Nothing to complain about here.

The Extras
There are plenty of extras too - some of which I haven`t got around to yet. There is some rather good background to pirates given by an eminent pirate scholar. I found that quite interesting, from the 4 categories of pirate, to their choice of weapons, and a brief history of some of the more famous pirates. All very enlightening. Did you know pirates hardly ever buried their gold? They were far more interested in spending it on wine, women, and song... sounds reasonable!
Some video documentaties and numerous other bits and pieces spread across the second disk. Commentaries on the 1st disk.

I see a sequel is already in discussion, lets hope it can match the first one.

I had been following this film for a while with interest before its release, and so wasn`t completely suprised when it got the acclaim it did. Ok, so on paper this theme park ride, turned Hollywood movie, had everything going against it; particularly if Renny Harlin`s "Cutthroat Island" was anything to go by. But when the film blasted itself into cinema`s across the globe it took critics and viewers by total suprise, making a huge box office and almost instantly greenlighting a sequel.

So then, the film? Well I`m not going to go over the plot, others have undoubtedly done it already, and to tell you too much might spoil the film. And we all know about Johnny Depp`s performance - if you haven`t seen it yet you`ll know exactly what everyone was raving about when you do. Overall the acting is top draw, with Geoffrey Rush managing to not camp it up too much, Orlando Bloom as Will Turner who slowly becomes a great Errol Flynn type of character, and Keira Knightley being... something lovely to look at.

The CGI is generally fantastic, with ILM showing why they are regarded to be the best in the business. Through nice speakers, the sound thumps out enough to make you feel right there in the middle of the sea. I`ve not sat through all the extras so far, and there is enough there to keep you busy for a good while.

Admittedly, I enjoyed the film a great deal, though maybe not as much as most people did. This is certainly a film though that everyone can watch and enjoy, apart from small children. My father has seen it three times, which if you knew my father means this film must be something special! For me though, I would have liked to have seen more battles at sea, and more swashbuckling, but with a running time of 2 and a half hours, I suppose there was only so much they could have included without making it a Lord of the Rings style epic!