DVD
Fast and the Furious, The (Collector`s Edition) (Australia)

DVD
Fast and the Furious, The (UK)

Article
Five Minutes of Heaven out in September

Fast & Furious out in September on DVD and Blu-ray 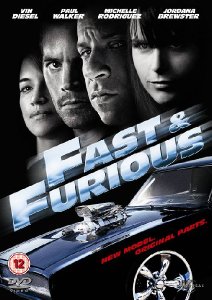 FAST & FURIOUS took over £13.5m at the UK box office and zoomed to the no. 1 spot - making it twice as big as any of the franchise to date!


From illegal street racing in Los Angeles, money laundering in Miami to drifts on customized rides across perilous Tokyo courses, one series built on speed has become a global sensation.  Now, in the next chapter, the four original characters reunite and come home to where it all began.

The high-octane thrill-seeking joyride is back!! FAST & FURIOUS returns as the biggest instalment to date, starring the original cast and packed with more high speed races, outrageously daring stunts and breathtaking fast-paced action than ever before. Available to own and rent on Blu-ray and DVD from 21st SEPTEMBER 2009, this is one adrenaline-packed ride that can't be missed!

Eight years ago international ex-con Dom Toretto (Diesel) committed himself to a fugitive existence, successfully hijacking fuel tankers in the Dominican Republic, with the sole remnant of his past, girlfriend Letty. When a tragic death brings him back to L.A., Dom reignites his feud with agent Brian O'Conner (Walker), as they are forced to confront a shared enemy, the notorious drug lord trafficking heroin across the US / Mexico border.

Dom and Brian must accept an uncertain new trust if they hope to avenge the tragedy that has ripped their lives apart and get the answers they are so desperately looking for. Infiltrating the underground network pushes these unlikely allies to the brink of their racing capabilities to earn a spot on a heist squad. Racing through the almost un-navigable tunnels carved into the caves, against the clock before the border control can identify a security breach, Dom and Brian become part of the cartel who hold the answers to Letty's death.

From director JUSTIN LIN (The Fast and the Furious: Tokyo Drift,) FAST & FURIOUS takes everyone on an adrenaline fuelled revenge-seeking journey through the streets of LA and south into Mexico as the cars and Dom and Brian's driving skills are pushed to the ultimate extreme.