Article
Bundy: A Legacy of Evil out in September

Five Minutes of Heaven out in September 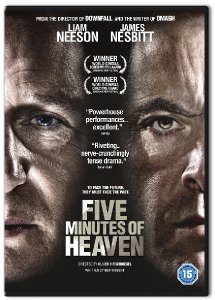 FROM THE DIRECTOR OF "DOWNFALL" AND THE WRITER OF "OMAGH". In 1975, 17-year-old Alistair Little, a new and inexperienced member of the Ulster Volunteer Force, fired three shots through the downstairs window of a house in Lurgan County Armagh. The bullets killed 19-year-old Catholic, James Griffin, as he sat watching television in his living room. The murder was witnessed by James' 11-year-old brother, Joe, who had been playing football outside the house at the time of the shooting. Little eventually spent 12 years in prison for his crime, but for Joe the justice he yearned for was never realised.

Written by BAFTA Award winning screenwriter Guy Hibbert (Omagh; No Child Of Mine) and directed by Oliver Hirschbiegel (The Invasion; Downfall), who received the Directing Award at this year's Sundance Film Festival for his work on the film, FIVE MINUTES OF HEAVEN stars Liam Neeson (Taken; Batman Begins), James Nesbitt (Murphy's Law) and Niamh Cusack (Heartbeat) in a story inspired by two extraordinary lives, which explores the impact of the legacy of violence on two men and the challenges of coming to terms with Northern Ireland's troubled past. FIVE MINUTES OF HEAVEN presents the dramatized facts of the story, before imagining what would happen if the two men, Alistair and Joe (who have never actually met in real life), were to meet up now, both middle-aged, over three decades after that fateful day.

The result is a unique and compelling film that deftly moves from a powerful re-enactment of the initial tragic events to a riveting and dramatic fictional interpretation of subsequent events in which the two agree to meet for a television documentary. However, Little (Neeson) is completely unaware that Griffin (Nesbitt) has only agreed to the meeting because he plans to avenge his brother's death by killing him.

During its course, the film examines the complex psychological relationship that exists between the perpetrator of a crime and the victim. It is not a film about truth and reconciliation or finding easy answers. Having worked closely with both Griffin and Little, screenwriter Guy Hibbert and director Oliver Hirschbiegel have created a unique, compelling and thought-provoking film that deals with themes and issues that continue to resonate throughout the world.