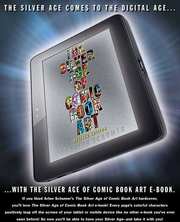 DVD
Hulk Vs. Wolverine / Vs. Thor

Seminal Book on Silver Age Comics due for Republication This Autumn 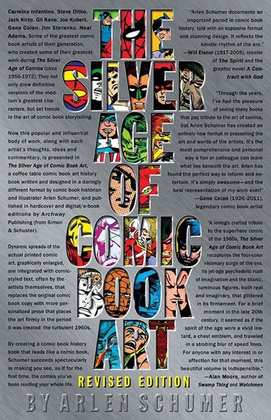 Carmine Infantino. Steve Ditko. Jack Kirby. Gil Kane. Joe Kubert. Gene Colan. Jim Steranko. Neal Adams.
Some of the greatest comic book artists of their generation, who created some of their greatest work during The Silver Age of Comics (circa 1956-1970). They not only drew definitive versions of the medium’s greatest characters, but set trends in the art of comic book storytelling.
Now this popular and influential body of work, along with each artist’s thoughts, ideas and commentary, is presented in The Silver Age of Comic Book Art, a coffee table comic book art history book written and designed in a daringly different format by comic book historian and illustrator Arlen Schumer, and published in hardcover and digital/e-book editions by Archway Publishing (from Simon & Schuster). Dynamic spreads of the actual printed comic art, graphically enlarged, are integrated with comic-styled text, often by the artists themselves, that replaces the original comic book copy with more personalized prose that places the art firmly in the period it was created: the turbulent 1960s.

By creating a comic book history book that reads like a comic book, Schumer succeeds spectacularly in making you see, as if for the first time, the comics you’ve been reading your whole life.
Back in print in a revised edition (in print and digital)—the works of eight legendary comic book artists are shown: Infantino, Ditko, Kirby, Kane, Colan, Kubert, Steranko and Adams. You'll see where Hollywood's superhero movies come from—and you'll "see" comics like you've never seen them before!

“Arlen Schumer documents an important period in comic book history, told with an explosive format and stunning design. It reﬂects the kinetic rhythm of the era.” — Will Eisner (1917-2005), creator of The Spirit and the graphic novel A Contract with God

"Through the years, I’ve had the pleasure of seeing many books that pay tribute to the art of comics, but Arlen Schumer has created an entirely new format in presenting the art and words of the artists. It's the most comprehensive and personal way a fan or colleague can learn what lies beneath the art. Arlen has found the perfect way to inform and entertain. It’s simply awesome —and the best representation of my work ever!” —Gene Colan (1926-2011), legendary comic book artist

“A lovingly crafted tribute to the superhero comic of the 1960s, The Silver Age of Comic Book Art recaptures the four-color visionary surge of the era, its jet-age psychedelic rush of imagination and the titanic, luminous ﬁgures, both real and imaginary, that glittered in its ﬁrmament. For a brief moment in the late 20th century, it seemed as if the spirit of the age wore a vivid leotard, a chest emblem, and traveled in a strobing blur of speed lines. For anyone with any interest in or affection for that moment, this beautiful volume is indispensible.” — Alan Moore, author of Swamp Thing and Watchmen 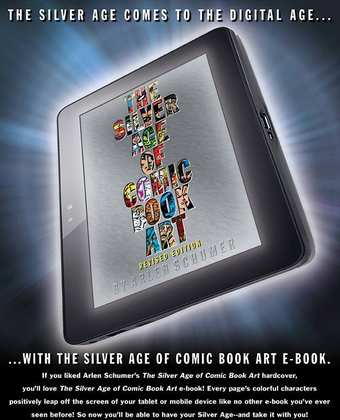