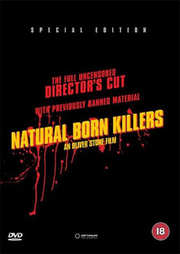 This film once again brings out the pure brilliance and talent of Quentin Tarantino, one of the most exciting film makers and one of the most imaginative screenplay writers around. From the writer and director of Resevoir Dogs, Pulp Fiction and Jackie Brown, comes a exciting, new story about a young couple who fall in love and and would do anything in the world to stay with each other, even kill.

Micky Knox (woody Harrelson) and Mallory Knox (Juliette Lewis) both grow up in this story with very disturbed childhoods, which in the long run mentally effects both these people and makes them beleive that murder and violence is not a bad thing from a very young age, hence the title "Natural Born Killers". As the film progresses Micky and Mallory become cold blooded serial killers, as well as the most wanted couple in the America. Before long the media turn this couple into cult heros, making them not only the most wanted couple in America, but one of the most famous.

If you are a fan of Quentin Tarantinos Directing, i would like to stress that he did NOT direct this film, So dont expect the film to be shot in the style of Reservoir Dogs or Pulp fiction, it is very different as i will explain. Oliver Stone is the man to bring this film to life, and hes done a hell of a job doing it. Natural Born Killers is very abstract, and i mean VERY abstract, one minute it might be black and white, the next the screen maybe in shades of green, or red. if theres a scene with a window about, you wont see grass and trees on the other side, but flames of fire and other abstract images. Because of this many people disliked the film as they did not understand why it was so abstract, But oliver Stone is simply trying to show the feelings of the characters in his own special way. Dont let this whole abstract thing put you off, its a brilliant touch and really makes the film what it is.

If you are a fan of Tarantinos films and scripts this is a movie to see. The story is great, the actors and acting are great, the directing is great and in the long run the film on a whole is better than great. Watch it.
posted by debaser1 on 26/6/2003 13:36