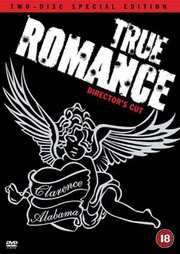 Synopsis:
In `True Romance`, two lovers (Christian Slater and Patricia Arquette) are thrust into a dangerous game of high-stakes negotiations and high-speed adventure. The pair come into unexpected possession of a suitcase of mob contraband. They flee to Los Angeles, where they`ll sell the goods and begin a new life. But both sides of the law have other ideas.

Written by Quentin Tarantino (`Pulp Fiction`, `Jackie Brown`), True Romance takes a hip and hard-edged look at a contemporary incarnation of the American dream. Tony Scott (`Top Gun`, `Crimson Tide, `Enemy Of The State`) directs an outstanding cast in an explosive mix of wit and action that is a truly unforgettable film experience.

"True Romance" is a good, old-fashioned romance flick with copious amounts of 90's-style cursing, drugs and violence added in for good measure. It is a film about true romance, dreams come true and paradise lost. The film really concentrates on Clarence (Slater), who is, quite simply a "nerd". He's a loner, loves comic books and kung-fu movies. All of a sudden, he gets married to his perfect girl and subsequently becomes "cool". Quite simply every goes right for Clarence.

"True Romance" boasts and impressive cast including; Christian Slater, Patricia Arquette, Dennis Hopper, Christopher Walken, Michael Rapaport, Gary Oldman, Brad Pitt and many more (even more in the deleted scenes). Although Pitt and Oldman add up to basically cameos (though VERY important ones, it is around those characters that the events of the film occur), Hopper, Walken and Rapaport impress. Walken's and Hopper's face-off is sheer acting dynamite.

Video: A very good 2.35:1 anamorphic transfer. Sharpness and flesh-tones are particularly impressive. There are no distracting print defects or edge enhancements. Contract does have a bit of a problem, with many dark scenes looking a bit light. However, the characters' rather colourful clothes are well defined and are probably the best bar to measure the colour/contrast rating on.

Tony Scott has always played second fiddle to his brother, Ridley. But this is a film that can stand up proudly to his brother's films. The cinematography is stylish and makes good use of the widescreen format. The end shoot-out is near incomprehensible in pan/scan.

Audio: Slightly less impressive. This 5.1 soundtrack is front stage heavy, with the rears barely being given a good workout. Still dialogue is clear and bass is quite effective. The roller coaster is about as showy as this track gets, great use of the sub and speakers to create the "you are there" effect.

Hans Zimmer's score is fabulous, simple, yet effective and catchy. On the commentaries, they say it been lifted from "Badlands". Never saw it. The music is also used in the menus.

Extras: Perhaps the most notable "extra" for Region 2 users, is that this is the complete, uncut "director's cut", which adds a substantial amount of violence. However, this also adds some question to the mental state of certain characters.

On the first disc are 3 audio commentaries. 1) Stars Slater and Arquette; this is a chat track with some good comments, but it is disappointing how sparse their comments are. In the first 30 minutes they seem to be just watching the film, it gets better though. 2) Director Tony Scott; though not as good as his brother's comments, this is a fine commentary offering the usual in depths details on how he became involved, technical issues, etc… A very good listen. 3) Writer Quentin Tarantino. This is the best audio commentary of the three. Tarantino seems to be hooked up to some oxygen or something because he rarely pauses for breath. He offers quite a large amount of information and is quite witty. Highly recommended.

Also on disc one are Tony Scott's storyboards and a DVD-Rom link to the screenplay.

Disc 2: Scene Specific Commentaries include Hopper, Pitt, Kilmer and Rapaport. All speak over their scenes with Rapaport being the longest at around 30 minutes. Being a massive Hopper fan, I tended to enjoy his the most. But all are very good. Pitt lives up to his standard on the "Se7en", "Fight Club" and "Ocean's 11" commentary. Truly one of the best actor commentator's. Pity his lasts only 4 minutes.

"30 Minutes of Deleted and Optional Scenes". Most are just scene extensions. The alternate ending is Tarantino's ending and predictable less happy than the current ending. The scenes are presented in 2.35:1 and are in good condition, though not as good as the feature. Tony Scott commentates on all, while Tarantino comments on the ending. Which do I prefer? Although Scott's ending completes the fairytale nature of the film, Tarantino's gives some consequence to the preceding moralities of the characters.

Finishing off the set are EPK featurette, a photo gallery and a trailer.

Overall: This is Tarantino's first script and still his best, in my opinion. Although packed with his trademarks trivialities, they are actually used to build character. Unlike his other films, you actually care about these characters. One question: Is Clarence based on Quentin himself or at least his dreams and fantasies? DVD wise, it has a good presentation and great commentaries. Sadly it is lacking of any real making-of stuff, which would have really made the package indispensable for DVD collectors.
posted by directorscutIMDb on 15/3/2003 22:31
7 / 10

A review of the region 1 release:

Warner Home Video has done the movie justice with this double-disc set.

Presented in 2.35:1 anamorphic widescreen, the picture is generally pleasing. Some scenes look terrific, while others contain some defects, i.e. film grain.

The Dolby Digital 5.1 track is well produced and is pretty engaging.Hans Zimmer`s score sounds terrific.Warner has gone the extra mile and included a DTS 5.1 track which sounds about the same as the Dolby track.

Disc contains no less than three commentaries: Tony Scott`s commentary is a little dry but manages to be informative. Christian Slater & Praticia Arquette were recorded together but their comments are pretty sparse.The third is very entertaining and features Tarantino who never stops and conveys a large amount of anecdotes.

There is a Director`s storyboard track availible to watch during the movie.

The second disc with an interactive featurette that is worth a look.

Before Pulp Ficton, there is True Romance, a romantic flick with a twist. A couple, Clarence and Alabama are basically trying to stay alive in a violent society. Drugs, violence and cursing are a plenty.

True Romance boasts a superb cast: Christian Slater as Clarence, Patricia Arquette as Alabama, Gary Oldman as the white pimp(who tries to sound like a black person), Christopher Walken as Concotti, Brad Pitt as stoned Floydd and many more.

Video- In 2.35:1 anamorphic widescreen. Colours are sharp, vibrant and well defined. There are a few problems with the video as some of the scenes are rather dark and grainy. It`s a pleasing transfer.

Sound- In DD 5.1 and 2.0. There isn`t much use of the rear speakers but dialogue is clear. A worthy gesture from Warner.

Extras- Although a 2 disc set, I would prefer as much extras filled on the first disc before being worthy of a 2nd disc. There are exceptions ie the length of the film.

1st disc, not only there is one but 3 commentaries. The 1st one is from Tony Scott. Not as interesting as his older brother Ridley, but still give his anecdotes. Quite interesting. There is also an option to view the director`s storyboard along with Scott`s commentary.

The 2nd one is from QT himself. I prefer interviews from him rather than commentaries. In this track, QT(who loves to blabber on for ages) engages on the screenplay 90% of the time. You`ll mostly hear QT referring to Dogs.

The last track is from Slater and Arquette, who constantly laugh like schoolkids especially when they see themselves kissing each other. Not much to learn here.

Moving on to disc 2, we have 11 deleted scenes with Scott commentary. All presented in 2.35:1 anamorphic and are of acceptable quality. Like with all deleted scenes, they add some depth into the film but had to be removed because of time constraints. Many of those deleted scenes are basically extensions. All the scenes clock in about 30 mins.

An alternating ending is also included with QT or Scott commentary. According to QT, he prefered this ending than the one on the main feature. I`m not going to spoil what happens in the end of True Romance. Personally, I prefer the ending that QT wanted as it stayed true to his vision.

Next, we have selective commentaries from the other cast which basically means they are only willing to talk about certain scenes. There are 4 of them and they consist of: Dennis Hopper, Brad Pitt, Val Kilmer and Michael Rapaport. Hopper`s commentary lasts 10 mins and his input is fairly sparse. Pitt`s commentary is short but says a whole lot more just like the Fight Club or Se7en commentary. Kilmer`s commentary is the shortest of the bunch. Rapaport`s is the most longest of the bunch and the most liveliest of all. The total for all the selective commentaries is under 1 hour.

The EPK featurette, about 9 mins long, is made around the time of the film`s release and adds little value. You just get some interviews from Scott and some of the cast and crew.

Lastly, the basic ingredients in extras are galleries and a trailer. The gallery is not the static kind where you can scroll at your own accord but is accompanied by the official theme tune of True Romance.

Overall- True Romance is QT`s first script and like all his other films it`s very good. Although not as stylish as Reservoir Dogs or Pulp Fiction, it`s the dialogue that counts. The talk of Tarantino has been one of if not THE most coolest quotes in movie history. If you like QT`s other works, this is worth looking at. Recommended.
posted by alias-rf2 on 11/6/2004 20:12