DVD
Lord Of The Rings, The: The Fellowship Of The Ring (Widescreen) (US)

Blu-ray
The Lord of the Rings: The Two Towers - Extended Edition
Related Articles 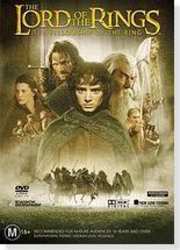 Synopsis:
In a time before history, in a place called Middle-earth, a dark and powerful lord has brought together the forces of evil to destroy its cultures and enslave all life caught in his path. Sauron`s time has come and he needs only one small object, a Ring that has been lost for centuries, to snuff out the light of civilization and cover the world in darkness. Though he has put all of his power into the search for it, fate has put it in the hands of a young hobbit named Frodo Baggins (Elijah Wood), who inherits the Ring and steps into legend.

With the help of a loyal fellowship comprised of hobbits Sam (Sean Astin), Merry (Dominic Monaghan) and Pippin (Billy Boyd); Gimli the dwarf (John Rhys-Davies); and humans Aragorn (Viggo Mortensen) and Boromir (Sean Bean); and with the guidance of the wizard Gandalf (Ian McKellen), and elves Arwen (Liv Tyler), Galadriel (Cate Blanchett) and Elrond (Hugo Weaving), Frodo must journey to the Mount of Doom to destroy the Ring. If he doesn`t find a way, no one will.

Part one of The Lord of the Rings trilogy, Peter Jackson`s film brings J.R.R. Tolkein`s tale vividly to life.

Special Features:
An inside look at the Special Extended Edition of The Lord of the Rings: The Fellowship of the Ring
Preview of Electronic Arts` video game The Two Towers
Peter Jackson - Making The Two Towers
Music Video: "May It Be" by Enya
Fifteen featurettes originally created for lordoftherings.net which explore the locales and cultures of Middle-earth and includes interviews with cast members:
Elijah Wood, Viggo Mortenson, Orlando Bloom, Cate Blanchett, Liv Tyler and Ian McKellen
Music of Middle Earth
Two Wizards
Languages of Middle Earth
Ringwraiths: The Fallen Kings
Believing the World of Bree
Hobbiton Comes Alive
Finding Hobbiton
Three in-depth programs that reveal the secrets behind the production of this epic adventure, including: "Houghton Mifflin Welcomes You to Middle-earth", "The Quest for the Ring" - a Fox TV Special and "A Passage to Middle-earth" - a Sci-Fi Channel Special.
Exclusive 10-minute behind-the-scenes preview of The Two Towers

Indeed, this is a spectacular movie, but after watching it for the very first time (and not having read any of the books) I have to say that it is slightly overrated.
The movie covers a huge scope and is full of information. However, the number of characters and realms is a bit overwhelming, and the lack of background information about each and every one of them leaves the unfamiliar-to-the-books viewer scratching his/her head in confusion.
The acting is not too impressive (with the exception of Ian McKellen). Especially annoying is Elijah Wood, who doesn`t really act, but rather uses face gestures.
The video transfer is excellent. The transfer shows no compression signs and the image is crystal clear. Quite a few shots are nothing short of amazing.
The DD 5.1 soundtrack is excellent as well. There is almost a constant usage of the surrounds and the sub. The sound is rich and it manages to enhance the entire movie`s experience.
The menus are all beautifully animated with sound.
The extras on the 2nd disk include an extensive 2-hour behind the scenes look (divided into numerous parts), which sadly lacks an in depth look at the CG elements of the movie (plenty of those exist) and a commentary. There`s also a music video. The extras are good, but not excellent.
I really don`t care for the upcoming 4-disk set. The movie is long enough as it is, I don`t think I can benefit for the extra 30 minutes and as for the new extras which will be featured in the 4-disk set - I`ll pass, thank you very much.
Bottom line - quite impressive, yet this movie fails to create empathy towards any of the characters, and as a stand-alone movie it is not rewarding at all. I think this movie can only be appropriately rated when the entire trilogy is completed. As of now, it lacks something, but I can`t put my finger on it.