Film
Laddie: The Man Behind The Movies
Related Articles 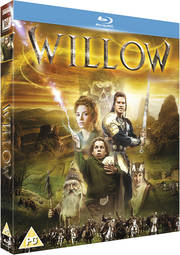 Another fantasy classic is getting a Blu-ray release, this one courtesy of Twentieth Century Fox Home Entertainment. Written and produced by George Lucas and directed by Ron Howard, Willow stars Warwick Davis, Jean Marsh, Val Kilmer and Joanne Whalley.

Celebrating it's 25th Anniversary, this comes from a new digital transfer overseen by Lucasfilm, so will hopefully be worth a closer inspection when it turns up on 11th March.

Arriving with a 5.1 DTS HD Master Audio soundtrack, extras will include deleted scenes with input from Ron Howard, Willow: An Unlikely Hero personal video diary by Warwick Davis, The Making of an Adventure featurette with a new introduction from Ron Howard, From Morf to Morphing with a new introduction from Dennis Muren, matte paintings gallery, and in a fit of DVD style retro... an easter egg of some sort.

When young Willow Ufgood finds an abandoned baby girl, he learns she is destined to end the reign of the wicked Queen Bavmorda.

In order to protect the child, Willow must team up with a rogue swordsmanand overcome the forces of darkness in the ultimate battle of good versus evil!