Article
Fashion icon documentary Iana Vreeland: The Eye Has To Travel swans onto DVD this October 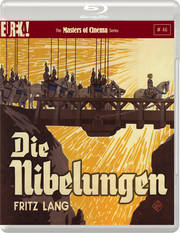 If five hour long German epics are your thing, then rejoice! For Eureka Entertainment are all set to release the next in their Masters of Cinema series on 29th October.

And it is none other than Fritz Lang's two part fantasy adventure Die Nibelungen, arriving as a lovingly restored print on both two disc DVD and Blu-ray sets.

The restoration has been done by the Friedrich-Wilhelm-Murnau-Stiftung, Germany, immaculately presenting the film's original frame rates and aspect ratio, with newly translated optional English subtitles for the original German intertitles.

Extras will include the hour-long documentary The Heritage of Die Nibelungen, an illustrated booklet featuring the words of Lang, rare archival imagery, and possibly more as well.

In part one, Siegfried, the film's eponymous hero acquires the power of invincibility after slaying a dragon and bathing in the creature's blood.

Later, an alliance through marriage between the hero and the royal clan of the Nibelungen turns treacherous, with Siegfried's sole weakness exploited.

In part two, Kriemhild's Revenge, Siegfried's widow travels to the remote land of the Huns to wed the monstrous Attila, and thereby enlist his forces in an act of vengeance that culminates in massacre, conflagration, and, under the auspices of Lang, one of the most exhilarating and terrifying end-sequences in all of cinema.