Review of Willow
added by
Jitendar Canth
Places to Buy 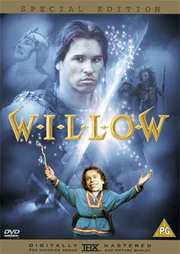 Synopsis:
One of the most successful fantasy adventure movies of all time. Directed by Ron Howard and executive produced by George Lucas, WILLOW is among the most requested DVDs on the Internet, consistently ranking in the Top 10 on DVD websites. The film stars Val Kilmer, Joanne Whalley, Jean Marsh and Warwick Davis and was nominated for Academy Awards for Best Sound Effects Editing and Best Visual Effects. The Special Edition DVD features exclusive material enabling fans of the movie, as well as a new generation, to experience the mystical adventure like never before.
This pivotal film in visual effects history has been THX digitally re-mastered for superior sound and picture quality and is presented in new 5.1 Dolby surround sound. Features on the disc include a commentary by Warwick Davis, an all-new documentary showcasing WILLOW`s history-making achievements in special effects, a classic "Making Of An Adventure" documentary, original theatrical trailers, TV spots, a still photo gallery, and more.

Based on a story by George Lucas, with a screenplay written by Bob Dolman, WILLOW is director Ron Howard`s fantasy world of medieval adventure. WILLOW stars Val Kilmer as Madmartigan, a swashbuckling warrior, and Warwick Davis as the title character. In a mythical kingdom, the evil sorceress Queen Bavmorda (Jean Marsh) plots to kill all infants so that the newborn princess, Elora, will never take over the throne. But a midwife sets the baby adrift in a river, and she is rescued by Willow, a farmer in Nelwyn, a peaceful village of trolls, fairies, and little folk. Willow and Madmartigan begin a quest to deliver the baby from evil while being chased by Queen Bavmorda`s daughter, Sorsha (Joanne Whalley), sent to bring the baby back to Nockmaar.

In a far off land, the evil Queen Bavmorda rules under the threat of an ancient prophecy. The prophecy foretells of the birth of a sacred child who will signal the end of her reign. In fear, Bavmorda orders her soldiers to capture every pregnant woman in the land, so that she may examine every newborn for "the mark" that will identify the prophesised child. The mother of the sacred child begs an old woman to smuggle her baby out f the castle before Bavmorda discovers and kills her. The kindly old woman agrees and carries the baby far away and, in a desperate attempt to save the baby's life, she sets her adrift on the river before sacrificing herself to Bavmorda's evil forces. The infant eventually washes up on the shores of a village inhabited by a kindly race of small people called the Nelwyn, where she is discovered by two children who beg their father, local farmer and wannabe sorcerer Willow Ufgood (Warwick Davis), to keep the child. Although sceptical, he eventually relents. Unfortunately the Nelwyn village soon comes under attack from Bavmorda's evil forces, and the village council decrees that the baby must be returned to her own kind.

Willow is charged with the task of returning the baby to the Daikini (or tall people), a perilous task that few would undertake. Setting off from the village with a few loyal friends in tow, Willow eventually meets up with an imprisoned warrior named Madmartigan (Val Kilmer). Madmartigan promises to look after the baby if Willow frees him from his prison and, after much deliberation, Willow agrees. Unfortunately, not long afterwards, tiny creatures named Brownies abduct both Willow and the baby. The Brownies serve Cherlindrea, Queen of the Fairies, who tasks Willow with taking the baby, who is named Elora Danan, to a far away kingdom where she will be safe from the evil Queen Bavmorda. Accompanied by a pair of comical Brownies, Willow embarks on the adventure of a lifetime. Along the way he faces many dangers and meets friends both old and new as he struggles to deliver Elora from harm, and save the kingdom from the evil Bavmorda.

A trip to the BBFC website confirmed that all previous cuts to Willow have been waived, so British audiences get to see the whole film for the first time. Although the cuts were minor, and related to a couple of instances of violence that are very tame by today's standards, it's still nice to see that the BBFC are starting to come to their senses.

Willow is presented in THX approved 2.35:1, anamorphically enhanced of course, and considering its age it looks fantastic. Fox continue to impress me with yet another excellent transfer, with very little in the way of image defects or print damage. While the whole thing is sharp and detailed, with solid black levels and natural flesh tones, colours appear subdued and the image is a little too dark overall. However, this appears to be more to do with how the film was shot, rather than a fault with the video.

The special effects, while groundbreaking in their day, are not all that special anymore. Some of the blue screen work is very obvious, and the revolutionary morphing effects were in their infancy (this was the first film to use morphing). Still, this is all in keeping with the visual style of the film, and this is a fine transfer overall.

Like most Special Editions, Willow comes complete with a newly remastered 5.1 soundtrack. Dialogue and score are predominantly confined to the front of the soundstage, with the rear channels coming to life at key moments. This occasionally includes atmospheric effects such as rain and thunder, but is mainly used to enhance the action sequences littered throughout the film. The track is pleasant to listen to, and I enjoyed the sweeping score from James Horner. Everything is clear and crisp, but I would have enjoyed the track even more if it had been a little more dynamic. Overall this is a good remix, but it doesn't live up to the high standards set by the video. The disc also includes an English Dolby 2.0 Surround mix.

The best extra is undoubtedly the commentary track from Warwick Davis, which is actually very satisfying to listen to. He provides a lot of useful and interesting information regarding the casting process, working with other actors (both his wife and father in law also appear in the film), filming locations and some of the on set hilarity that occurred. Thankfully Warwick doesn't pause too often, which is a pleasant surprise considering he's probably not all that well versed in recording a track of this nature. While this doesn't rank as one of the best commentaries I've ever heard, it's a damn site better than many. The commentary is also subtitled, which is a nice touch.

"Willow: The Making of an Adventure" comes next, running for a little over twenty minutes. This is a fairly promotional piece from the time of the movie's original release. It contains interviews with cast and crew, a look at some of the special effects techniques, but little more. This is worth a look, but I couldn't see myself returning to it any time soon.

A sixteen minute featurette entitled "Morf to Morphing: The Dawn of Digital Filmmaking" is also included on the disc. This features interviews with many of the creative staff behind Willow, including Ron Howard and a very young (and thin) George Lucas. However, the main interviewee is Dennis Muren. Muren talks at length on how ILM invented the morphing process so common in today's films, and we are given a behind the scenes look at the evolution of the process and the finished article as seen in the movie. There also seems to be some debate at ILM over who actually coined the term "morphing".

In addition to three teaser and theatrical trailers, there are a total of eight TV spots included. Rounding off the package we have an extensive still gallery, containing around forty-five photographs. The disc also includes an additional eight minute featurette in the form of an easter egg.

Although Willow plods along at a fairly pedestrian pace for most of the running time, I found the film grew on me the longer I watched. Things really start to pick up past the half way mark, and there are some good old fashioned hack and slash scenes towards the end, which are very entertaining. Unfortunately, I did find the ending itself a tad disappointing. To be completely honest though, I don't really see myself as the target audience; children and the young at heart will get a lot more from Willow than I did. Still, some of the silly antics of the Brownies and Madmartigan's bravado did have me laughing out loud at times. I'm aware that Willow has a strong cult following, so there's obviously a ready-made audience for this release, and I believe they will be impressed with what has been delivered. Once again Fox have produced a great DVD, one with excellent video and audio, ably backed by a respectable selection of extras (especially the commentary track). This elevates Willow far above the average back catalogue release. Although not strictly my cup of tea, Willow isn't a bad film and I'd recommended this disc to fans or those looking for solid, if somewhat unoriginal family entertainment.
posted by Chris Gould on 20/12/2002 23:26