Thor: The Dark World crashes onto DVD and Blu-ray this February 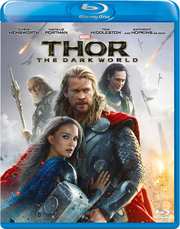 The god of thunder, the bloke with the big hammer, and Marvel comic book hero, is back. Well actually he came back last year, now he's back in the living room courtesy of Walt Disney Studios Home Entertainment.

The DVD will include a deleted scene and the Captain America: The Winter Soldier first look. Expect recommended retail prices of £19.99 for the Blu-ray release, £16.99 for the DVD version, and £22.99 for the 3D release.

Thor, the Mighty Avenger, battles to save Earth and all the Nine Realms from a shadowy enemy that predates the universe itself. In the aftermath of Marvel’s Avengers Assemble, Thor fights to restore order across the cosmos, but an ancient race led by the vengeful Malekith returns to plunge the universe back into darkness.

Faced with an enemy that even Odin and Asgard cannot withstand, Thor must embark on his most perilous and personal journey yet, one that will reunite him with Jane Foster and force him to sacrifice everything to save us all.