DVD
Road To Perdition (Widescreen) (US) 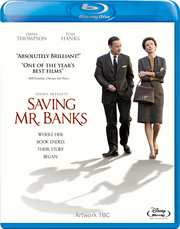 It's a classic family movie, possibly the most loved of all, and Mary Poppins is the subject of this new movie from Disney Pictures out on 24th March. Arriving on both DVD and Blu-ray is Saving Mr Banks, directed by John Lee Hancock and starring Tom Hanks,  Emma Thompson, Paul Giamatti, Jason Schwartzman, Bradley Whitford and Colin Farrell.

With extras including deleted scenes, and behind the scenes featurettes The Walt Disney Studios: From Poppins to the Present and Let’s Go Fly a Kite, the recommended retail price will be £15.99 for the DVD release, and £21.99 for the Blu-ray.

He soon begins to watch helplessly as Travers becomes increasingly immovable and the rights begin to move further away from his grasp. But, as the books stop selling and money grows short, Travers reluctantly agrees to go to Los Angeles to hear Disney’s plans for the adaptation.

It is only when he reaches into his own childhood that Walt discovers the truth about the ghosts that haunt Travers, and together they set Mary Poppins free to ultimately make one of the most endearing films in cinematic history.