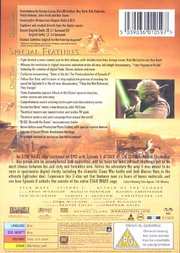 Back Cover of Star Wars: Episode II Attack Of The Clones (2 Discs) 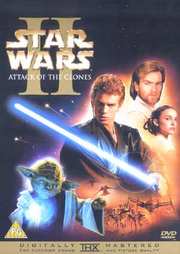 Synopsis:
STAR WARS: EPISODE II ATTACK OF THE CLONES is set ten years after the events of The Phantom Menace and the galaxy has undergone significant change, as have Anakin Skywalker (Hayden Christensen), Obi-Wan Kenobi (Ewan McGregor), and Padmé Amidala (Natalie Portman). Anakin has grown into the accomplished Jedi apprentice of Obi-Wan, who himself has transitioned from student to teacher, while Padmé is a distinguished Senator. Anakin and Obi-Wan are assigned to protect Padmé, whose life is threatened by a faction of political separatists. As powerful forces prepare to collide in epic battle, Anakin and Padmé find themselves torn between duty and honor and a love that is forbidden. These heroes face choices that will impact not only their own fates, but also the destiny of the galaxy.

As the first major live-action motion picture captured and created directly from the digital source and digitally mastered by THX, the Episode II DVD allows fans the chance to relive the adventure in the way Writer/Director George Lucas meant it to be seen, with spectacular digital clarity. Highlights include the climactic Clone War battle with over 200 Jedi fighting, the exhilarating Coruscant speeder chase and the 800-year-old Yoda wielding his lightsaber in the ultimate duel.

Eight deleted scenes created just for this release, each with introductions from George Lucas, Rick McCallum and Ben Burtt
Witness the revolution in digital character animation in the all-new, full-length documentary "From Puppets to Pixels," featuring the creation of digital Yoda, Dexter Jettster and more
Exclusive documentary, "State of the Art: The Previsualization of Episode II"
Follow Ben Burtt and his team as they explain the process of creating the sound for Episode II in the all-new documentary "Films Are Not Released; They Escape"
Three Featurettes explore Attack of the Clones` general storyline, action scenes and love story
Comprehensive, award-winning, 12-part web documentary series
"Across the Stars" music video featuring John Williams
Theatrical teasers and launch trailer, and 12 TV spots
Theatrical posters and print campaign from around the world
"R2-D2: Beneath the Dome" mockumentary trailer
Never-before-seen production photo gallery with special caption feature
Episode II visual effects breakdown montage
DVD-ROM weblink to exclusive Star Wars content

What a load of rubbish! Lucas obsession with CG characters removes heart from the film, you don`t care about any of the characters. Anakin and Padme have come from the forest school of acting and the dialogue is cheesy, dull and childish.
A couple of the action sequences were alright but the big end battle was ludicrous. A handful of Jedi versus thousands?, no chance. Yoda`s much hyped fight with Dooku was average as well. Avoid this film. Go watch Lord of the Rings or Star Trek First Contact instead.
posted by morpheus177 on 17/12/2002 22:40
9 / 10

Star Wars Episode II is a great improvement on the much slated Phantom Menace. I dont think it is as good (nor could it hope to be!) as the original trilogy, but you get 136 minutes of pure entertainment. The movie isnt perfect by any means, but i loved it. I mean Yoda has a fight with his little green lightsaber goddamnit!!!! There are a number of stand out scenes, all perfectly executed under the direction of George Lucas, such as the battle between Obi-Wan and Jango Fett and the Geonosis arena battle in the last half hour. Some elements of the love story between Padme and Anakin drag a little and can be extremely corny, but aside from this Episode II is great fun for all ages.

Picture is a straight transfer from a digital master to DVD and looks fantastic!!! Shot using revolutionary digital cameras in 2.35:1 widescreen (anamorphically enhanced), the image is nothing short of perfection. Shooting a movie digitally eliminates any possibility of scratches, dirt or dust since no celluloid is used. There will be absolutely no deterioration in quality on the master source. EVER!
Sound is in DD 5.1 and DD 2.0, and both sound great!! There is a lot of power in the mix and all the legendary Star Wars sound FX are utterly earshattering. No problems here whatsoever!!
As for the extras, my favourite were the web documentaries and the digital technology featurettes. Also included among others are 8 deleted scenes completed especially for this DVD. Now thats dedication!!
Massively recommended ;)
posted by Richard Knowles on 24/12/2002 03:58
6 / 10

What a fantastic looking film with copious special effects and magnificent audio.

Pity the story, dialog and some of the acting is so dreadful.

Ok I`ll have to start of with a confession... I am a Massive Star Wars fan. I have eagerly awaited the continuation of the story in the form of prequals for many years and in my personal opinion the Magic IS still there. So many people have instantly dismissed these films for being "too childish" or "poorly acted" and in my opinion this only comes from people who have got too old. Look at the original star wars films and explain to me where they are well acted !!

Anyhow rant over lets get back to Episode II !

The film fits in the most out of any in the 4 others so far, and it was an ambitious undertaking by Mr Lucas. The biggest Land battle in the form of the much anticipated start of the Clone Wars. A fantastic chase scene, showing a day in the life of Jedi`s. And the beginnings of a Romance that will produce Luke and Leia. It also fills in bits and bobs including the rise of Palpatine.

The Video as previously mentioned is nothing short of Perfect ! it is absolutely stunning... If you have a good television this film is quite fabulous!!

The audio too is a feat to be heard. The magic of Si-Fi element gives the sound effects people the freedom to go mad, and the score by John Williams is as good as all his work before (Star Wars, Indiana Jones, Jaws, ET, Close Encounters etc...)

The features as with Episode I are very exstensive and include lots of info and many featurettes. If your a fan of the films I am sure you will already own this... if not you probably won`t want it ! In fact I don`t know why I just wrote this ?
posted by Stiffler on 16/1/2003 17:07
7 / 10

I will write this review similar to my Phantom Menace review giving five major reasons why Attack of the Clones is bad. 1) Darth Lucas' direction. Again, it's appalling, although a BIT better than The Phantom Menace. 2) Hayden Christian. If he doesn't win the Razzie there is not justice in the world. He cannot act and is simply an 18-year-old (or whatever age he's supposed to be) baby all the way through the film. 3) The romance. Anakin is a jerk in every scene when he's with Padme and she simply falls in love with him suddenly. You aren't fooling anyone, George. Oh and in the scene where Anakin confesses what he has done (bad, bad acting, Hayden) any sensible person (I'm looking at you, Padme) would run for it. Does she? No. Brilliant writing there George. 4) Yoda. Thank you George, with this digital Ninja and along with Anakin's "dream" sequence, you've turned Star Wars into a comedy. 5) Boba Fett. a) He was NEVER a great Star Wars character. He might have been a good toy for you fanatics but his role in the films is minuscule. b) The kid is just plain annoying. Period.

Video: After the poorness of TPM, Lucas' seems to have listened to his critics. Attack of the Clones is taken from the original digital source and at times it's stunning to watch. However the transfer also displays the defects of digital photography. First the greatness. There are NO defects such are scratches, nicks, grain or dropouts. You get a perfect print along with the likes of Monster's Inc or Final Fantasy. Overall sharpness is excellent. Colours are also superb with fine definition. However, all is not great. There are jaggies, though significantly less than TPM. Some scenes, such as the speed chase where the camera moves fairly fast, don't look sharp enough. And the transfer seems to have problems with blackness and contrast as displayed in the bedroom assassination attempts and the fire-lit scene of chapter 23. But these are minor niggles in a transfer that looks fabulous. More of this for the original trilogy, please.

Audio: This is an excellent soundtrack but it simply doesn't have anything that comes close to the visceral audio experience of the Pod Race on TPM. The Asteroid chase and the Genosis battle are standouts. Dialogue is clear throughout and do I need to mention there is no cackle or noise on the track? John Williams' score, apart from the usual themes isn't very good. BIG SHOCK. He simply must be getting bored working with a hack like Lucas.

Extras: The audio commentary by Lucas and the rest is fairly good but a BIT too VFX technical for my liking. Lucas still doesn't apologize for ruining the saga.

Disc 2: On TPM DVD, "The Beginning" was the best feature. One would hope for another one on this disc but we don't get it. What we get is a 50-minute propaganda machine for Darth Lucas' plan to make film a CGI only medium. It's well edited (done by John Shenk) but I'm totally cynical about its subject.

Far better is the 25 minute documentary "State of the Art: The Previsualization of Episode II" which is about the animatic process of films. The real threat of the documentary is the clips from the original trilogy, which will delight fans. Even better is "Films Are Not Released: They Escape" an in-depth look at the sounds of Star Wars, which is strangely hidden away in Dex's Kitchen.

Following on from TPM are the 8 deleted scenes. However, unlike TPM they are just talky-talky scenes that aren't interesting and deserve to be left on the cutting room floor. Each scene is given an introduction.

The 12 web-featurettes are also back and so are 3 EPK featurettes. Again they offer a good teaser without delving too much into the production. 4 minutes Visual Breakdown Montage is included on the disc. Why anyone would need to see it is puzzling, the effects are pretty obvious.

Rounding of the disc are the usual trailers, TV spots, galleries and a humorous, if campy "R2-D2: Behind The Dome" mockumentary trailer. Spinal Tap it ain't.

Overall: Top notch presentation but lightly superficial extras. The film itself is an improvement over TPM particularly the last 45 minutes, which begins to go back to Star Wars fun. Oh and Ewan McGregor has simply made Obi-Wan his own here. Fantastic work Let's hope I can add another 2 marks to Episode III.
posted by directorscutIMDb on 28/2/2003 23:56
10 / 10

Attack of the clones is sadly not as good as the origianal trilogy, but is better than episode 1. There are some great action scenes esspecially the clone war scenes, but the film is let down by the awful love scnes. The only thing worth watching in the love scenes is natalie portman. Overall a good film let down by some crap scenes.
The picture is amazing, captured from the digital source, it is great to look at, no matter your size tv, even 14".
The surround sound is amazing esspecially in the clone war scenes.
The extras are great, sadly lacking `the beginning` type documentry on the episode 1 dvd. The extars are good and intersting. The beneath the dome mockumentry is the highlight, to bad it`s only a trailer.
A great dvd let down by the film
posted by Clive_Evil_C on 16/3/2003 15:12