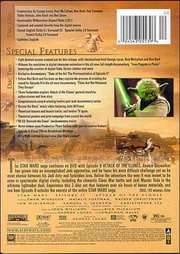 Back Cover of Star Wars: Episode II Attack Of The Clones (2 Discs)

Star Wars: Episode II Attack Of The Clones (2 Discs) (US) 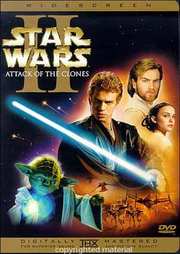 Synopsis:
STAR WARS: EPISODE II ATTACK OF THE CLONES is set ten years after the events of The Phantom Menace and the galaxy has undergone significant change, as have Anakin Skywalker (Hayden Christensen), Obi-Wan Kenobi (Ewan McGregor), and Padmé Amidala (Natalie Portman). Anakin has grown into the accomplished Jedi apprentice of Obi-Wan, who himself has transitioned from student to teacher, while Padmé is a distinguished Senator. Anakin and Obi-Wan are assigned to protect Padmé, whose life is threatened by a faction of political separatists. As powerful forces prepare to collide in epic battle, Anakin and Padmé find themselves torn between duty and honor and a love that is forbidden. These heroes face choices that will impact not only their own fates, but also the destiny of the galaxy.

As the first major live-action motion picture captured and created directly from the digital source and digitally mastered by THX, the Episode II DVD allows fans the chance to relive the adventure in the way Writer/Director George Lucas meant it to be seen, with spectacular digital clarity. Highlights include the climactic Clone War battle with over 200 Jedi fighting, the exhilarating Coruscant speeder chase and the 800-year-old Yoda wielding his lightsaber in the ultimate duel.

Eight deleted scenes created just for this release, each with introductions from George Lucas, Rick McCallum and Ben Burtt
Witness the revolution in digital character animation in the all-new, full-length documentary "From Puppets to Pixels," featuring the creation of digital Yoda, Dexter Jettster and more
Exclusive documentary, "State of the Art: The Previsualization of Episode II"
Follow Ben Burtt and his team as they explain the process of creating the sound for Episode II in the all-new documentary "Films Are Not Released; They Escape"
Three Featurettes explore Attack of the Clones` general storyline, action scenes and love story
Comprehensive, award-winning, 12-part web documentary series
"Across the Stars" music video featuring John Williams
Theatrical teasers and launch trailer, and 12 TV spots
Theatrical posters and print campaign from around the world
"R2-D2: Beneath the Dome" mockumentary trailer
Never-before-seen production photo gallery with special caption feature
Episode II visual effects breakdown montage
DVD-ROM weblink to exclusive Star Wars content

All I can say is excellent dvd, Video,Sound and Extras are all excellent.Like Episode 1 DVD you get three different animated menus, which can be accessed by pressing 1,2 or 3 on your remote when the FBI warning screen comes up.My personnel favourite is the Kamino menu.You also get the bloppers DVD credits as like episode 1 DVD, which can be accessed the same way as you did on the Episode 1 DVD.The clone war battle scenes are awesome (Shame it didn`t last longer).All in all a benchmark in dvd visuals and should be added to any DVD collection (Unless you really hate Star Wars).
posted by David Garner on 8/11/2002 00:48
8 / 10

Stunning audio-visual presentation does not a good DVD make; but it doesn`t hurt matters either. While the latest instalment in the Star Wars saga still can`t live up to the original trilogy (in my opinion), it is certainly a better film than its predecessor, The Phantom Menace.

I don`t intend to get into a lengthy movie review here, but aside from some rather weak romantic plot elements, which really do start to irritate after a while, Attack of the Clones is a fun film jammed with enough action and intrigue to keep all but the most cynical of audiences happy.

The transfer is simply superb; reference quality stuff and no mistake. The direct digital-to-digital transfer has delivered an image that surpasses anything I`ve seen on the DVD format, including recent gems such as The Lord of the Rings. The 2.35:1 anamorphic transfer comes to life with incredibly vivid colours and unsurpassed clarity, with none of the problems usually associated with film to DVD transfers. If I had to level any sort of criticism at the video it would that it almost looks *too* perfect, which in turn damages the credibility of some of the CGI characters. Still, this is really just nit picking, as on the whole the CGI work is stunning. If the almighty sight of the full force of 200,000 clone troopers doesn`t inspire awe, the sight of a completely CGI rendered Yoda kicking butt will.

The audio is no less impressive, although it`s not quite as aggressive as the track found on The Phantom Menace. However, this track is more expertly balanced, featuring subtle ambient effects and explosive set pieces. The speeder chase through the skies of Courascant; the chase through the asteroid belt; the opening battle of the Clone Wars; all sound phenomenal here. The asteroid pursuit in particular features some of the best effects in the film, as Jango Fett ruthlessly tries to destroy Obi-Wan Kenobi with seismic charges. The noise these charges make when they explode is almost indescribable; it's as if a black hole devours the sound of the explosion, before suddenly releasing it in one gigantic blast of concussive force. It's great stuff!

Extras are far too numerous to mention here, but I will say that we're treated to yet another interesting commentary with Lucas and company, eight deleted scenes that add some much-need "meat" to the romance between Padme and Anakin, some fantastic featurettes on creating the digital characters, sound effects and the like, alongside a plethora of TV Spots, trailers, music videos, poster campaigns, web documentaries and much, much more.

Episode II never really manages to recreate the magic of the original trilogy (Episodes IV, V & VI) but at the same time gives Episode I a good kick in the groin. It's hard to resist just going - Yoda fights, it's really cool, and that alone makes it worth buying this disc.

Technically this disc is outstanding. Video (straight from digital source) is wonderful and the audio pretty damned good as well. We even get a great selection of extras from the commentary on disc 1 to the multitude of documentaries & other goodies on disc 2. I haven't gone through all of these yet, but suffice to say what I've seen so far is very impressive. Put it this way, it's the only time I've religiously gone through (and enjoyed) all the TV spots and trailers!! Even the menus are worth watching for a bit!

Episode I was a huge dissapointment so I was reliefed when Episode II was much better.This 2-disc set makes for an awesome release.

To sum up the soundtrack:Awesome.Each channel is used to its full capacity and never lets up.The seismac charges during the asteroid field sounds ear bleeding.

On the 2nd disc,You`ll find eight deleted scenes that are worth a look and come with introductions.There are three excellent documentaries to take a look at:A 52 minute piece on the creation of digital characters,a 25 minute piece on the pre-visualization of the movie,and a very interesting 25 minute segment on the sound design.Other extras include the 12-part web documentary,three promo pieces,An F/X breakdown
montage,TV spots and trailers plus a hilarious preview of the R2-D2 mockumentary.

This film is more to the point, it is and will always be more... Star Wars.

Lucas still hasn`t figured out how to tell his story. Forget the effects, forget the CGI YODA, this still isn`t quite what the fans want!

The story just does not get on with it, Anakin has been reading too many womens books, listen to some of his lines - this was never going to be Titanic.

Can I make a prediction?

EP3 will end with a long tracking shot of Vader and the Emp, stood on an unfinished Death Star, looking out on to the universe, just you watch.
posted by lambechop on 27/4/2003 02:54