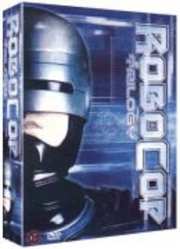 Synopsis:
All three Robocop movies in a great box set - including an ultra-violent Director`s Cut of Robocop!

There`s a new law enforcer in town... and he`s half man, half machine! From Paul Verhoeven, the director of Total Recall, Basic Instinct and Starship Troopers comes a sci-fi fantasy with sleek, high-powered drive about an indestructible policeman who dishes out justice.

As well as featuring Robocop, this box set also contains the sequel Robocop 2, directed by Irvin Kershner, where the cyborg robocop returns to rid Detroit of the designer drug Nuke. Plus Robocop 3, in which the giant Omni Consumer Corporation has succeeded in creating war zones in the city`s neighbourhoods to make way for their new metropolis, Delta City.

The Robocop disc has quite a lot of grain and some print damage but, framing aside, is slightly better than the non-anamorphic Criterion version.

Sound isn`t as good as it could have been, with some missed opportunities for meaty explosions and gun play. The mix isn`t as balanced as it could be either.

Extras are a LOT better than the Criterion disc, and the commentary on this one actually has interaction between Verhoeven and co.

Worst thing about the disc is the `integrated branching`, which isn`t seamless. You get a layer change style pause when moving between theatrical and director`s cut. I`ve tried it on a Pio DV444, a Tosh SD100 and a Sammy 709, with the latter being the best believe it or not.

Robo 2 and 3 have better video than Robocop (in my opinion) and the audio is supposedly Pro-Logic (according to the PR company). If it is, they forgot to encode the surround flags... Still, forced into Pro-Logic it sounds pretty good, and a lot more natural than Robocop.

I`ve always liked Robocop. I also like the sequel although it isn`t as good as the original. I don`t really care about the 3rd film. So I was pleased when I found out a SE of Robocop was due to be released so I waited for it. And I`m glad I did!

Robocop is available in two versions: the original version or the director`s cut. I prefer the director`s cut because it presents the film in full for the first time ever in the UK. Plus, I`d never seen the director`s cut before. Picture quality is generally excellent although there is some grain from time to time and other minor picture faults. Robocop 2 also has a very good transfer and suffers from very few problems. The same goes for Robocop 3.

Robocop is presented in DD 5.1 while the two sequels have to settle with Dolby Surround. The mix for Robocop is fairly good but not as good as I hoped it would be. It sounds a bit too quiet at times and some of the explosions and gunfire are somewhat lacking. I`m not saying that there are no good moments: there`s lots of good moments throughout the track. It`s just not quite as good as I hoped it to be. The two sequels sound pretty good and are louder then the original! Overall, the sound for all 3 films is pretty good.

Extras wise, there`s a whole load for Robocop but barely anything for the two sequels. First of all, there are two trailers. One of which has the music from The Terminator for some reason! There is also a TV spot and trailers for the two sequels which are also presented on the other discs.

There are 3 featurettes: 2 are old and 1 made recently. The first featurette, Shooting Robocop, starts with an interview with
Robocop ( Peter Weller ) and Bob Morton ( Miguel Ferrer ) in character and then turns into the more traditional featurette but without the voiceover. The second featurette, Making Robocop, is more like traditional featurettes. Both are interesting. The new documentary, Flesh + Steel, contains interviews with director Paul Verhoeven, writers Edward Nuemeir and Michael Miner, producer Jon Davison and several others and is excellent. With these 3 featurettes, you learn a lot about the making of the film and the troubles encountered.

Next up are 4 deleted scenes which are not worth putting back in the film but it`s nice to have them. Production footage of the scenes from the director`s cut are also presented and are an interesting watch. There is also a storyboard commentary with Phil Tppet who animated ED-209. Although the piece is a bit short, it`s nice to observe Tippet`s technique.
The stills galleries is split into six sections and contains photos of the cast and crew as well as behind the scenes.
All pictures are set to music from the film.

The final extra is an audio commentary with Paul Verhoeven, Jon Davison and Ed Neumeir. The commentary is very good and contains a lot of anecdotes and info from the trio. There is also some p*** taking and irrelevant chat. A damn good commentary. The menus for Robocop are quite good too.

Overall, this is an excellent film which gives Robocop the treatment it deserves. Sadly, Robocop 2 and 3 have been badly treated extras wise but are good technically. If you aren`t bothered about the sequels, then buy the boxset anyway for the excellent SE for the first film.
posted by AD1986 on 12/2/2002 22:45
8 / 10

When I was a wee nipper at the age of 4 I sat down with the family to watch a film, the film was Robocop and from that day there started my passion for movies.

Some would say a 4 year old has no right to watch a film with such violence (and maybe their right) but it's a film that I've loved for years and will continue loving.

The first film was a huge success; the second film wasn't too bad, watchable not half the film of it's predecessor, and the third well lets just not go there shall we (real bad).

The 3 films are presented in 1:85:1 Anamorphic, which caused a stir with fans of the first film, which the theatrical ratio was 1:66:1 which means cropping has accrued but you don't lose much that will distract your viewing.
With a few specs of grain and very minor print damage the picture is great for it's age, while the other 2 are pretty much the same as the first.

On the first film we get a DD5.1 audio track and I say it's about damn time, although it's not the best 5.1 track I've heard, with the sound a bit low and some of the big shoot-outs not getting some rear action left me a tad disappointed.
But that aside the dialogue and music score is great, very clear and crisp.

The other 2 films get a DD2.0 tracks in various languages, which have their moments but doesn't build the excitement of a good DD5.1 track.

With only the first film getting some real extras other than Trailers.
We get a feature length audio commentary from Director Paul Verhoven, and 2 Documentary's from 1987 and one made specially for the DVD titled "Flesh And Steal: The Making Of Robocop".
Thrown in the mix are some Deleted scenes, some storyboard comparisons (with Commentary).

This package appealed to me for the first (and maybe the second) film(s) but certainly not the third, and was very pleased with what I got, while in a perfect world we'd be treated with a better third film and extras and better sound all-around you have to live with what you got, and I have.
posted by Kain^ on 27/3/2002 03:25
7 / 10

Robocop: Verhoeven`s original and best movie. Influenced by many people and praised by film critics worldwide. Famous for it`s ultra violent scenes yet stylish and full of black humour and satire especially Verhoeven`s take on consumerism consisting as 3 adverts as interludes.

Robcop starts with a cop named Alex Murphy. He`s just an average cop, nothing special. After recieving a radio call from HQ reporting a bank robbery. Him and partner, Ann Lewis persue the criminals. The criminal leader isn`t too happy after robbing the bank in a very rushed manner. One of his goons is to blame and shoves him out to lose Murphy. Fortunately, Murphy finds their hideout and decides to go by his own. He finds 2 of the degenerates watching TV, suprises them and kills one of them. He tries to take the other but he is ambused by his shotgun wielding comrades only to be filled full of lead and blasted by the mastermind in the head. From there, Murphy`s body is experimented on and eventually ressurected as a cyborg(part-man part-machine) who is dedicated to law enforcement minus most of his previous life. Available on this DVD is the even more violent Director`s cut and the original R rated cut. Verdict 5/5

Video- Presented in 1.85:1 anamorphic widescreen, the picture quality is acceptable. Natural bits of film grain and dirt is seen frequently throughout but I don`t think it is too bad. MGM could`ve done better. The plus side is that the picture is relatively sharp and is free of edge enhancement.

Sound- Remastered in DD 5.1, there isn`t much use on the rear speakers and there is plenty of gun fire. Again, acceptable for me.

Extras- The Robocop DVD has some good extras on board. First of all, you get an audio commentary from Verhoeven. He deliveries his anecdotes on the film e.g the crack that Bob Morton is snorting is sugar.

Documentary `Flesh and Steel` is included on this DVD, it gives a retrospective on Robocop. This is fairly interesting. Worth looking at.

Next, we have two making of featurettes made around the time of the films release. This is standard practice from MGM(again). They add very little value and should be removed.

Next, we have a behind the scenes footage that is also worth looking at. 4 deleted scenes that aren`t worthy of re-integrating back into the film and hence I can understand why it wasn`t included in the main feature. A storyboard with commentary and galleries finish the package.

Robocop 2: From the director of Star Wars Ep V: The Empire Strikes Back, we get Robocop 2. An inferior sequel to Verhoeven`s great film, Robocop continues to enforce the law to get rid of a drug named Nuke. OCP, the company that produced him have designed a wannabe cyborg using his brain as a model. Robocop must fight the evil drug lord and this wannabe cyborg. The consumerism jokes get a little weary here and are old. Verdict 2/5

Extras- Apart from a trailer, we have nothing on offer here.

Robocop 3: The worst film of the trilogy. English accented baddy(clichéd) and Japanese cyborgs. What the hell?!?!? Such a disaster that I can describe anymore Bad acting and bad script. Consumerism is becoming very annoying. Verdict 1/5

Extras- Nothing, if you want to include multiple subtitles or trailers as extras. They are far from extras.

Overall- For those who like Robocop there is the trilogy with the nice packaging but if you only want the first film, the first and best is out now at the expense of losing the nice packaging for a standard keep case.(as if anyone will care)
posted by alias-rf2 on 2/6/2004 23:10