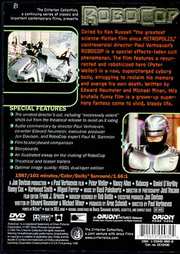 Back Cover of Robocop: Director`s Cut 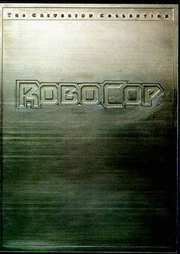 The film features a resurrected and roboticized hero in a new, supercharged cyborg body, struggling to reclaim his memory and avenge his own death.

The unrated director`s cut, including "excessively violent" shots cut from the theatrical release to avoid an X rating.

Almost everyone knows the story of Murphy, a good cop brutally murdered in the line of duty. Resurrected as Robocop, the crime-fighting cyborg, Murphy must come to terms with the loss of his humanity, whilst trying to track down those responsible for his death. This is the unrated Director`s Cut of the film, and features approximately 2 minutes of additional footage. Watch out for ED 209`s first appearance, and Murphy`s death in particular.

Robocop is presented in letterbox 1.66:1, which is a pain for those of us with a widescreen set. The video quality is good throughout, as you would expect from a Criterion release, although the film does appear slightly grainy in some parts. It would ahve been nice to have an anamorphic transfer though, and this would have increased the video rating below.

Robocop features a Dolby Surround sound track, which does a pretty good job. It could possibly do with a bit more "oomph" in certain scenes (such as those featuring ED209). A 5.1 track would also have been nice.

The disc features a generous amount of extras. As well as the entertaining, and often amusing, commentary track (featuring Verhoeven and Neumeier among others), there are theatrical and teaser trailers, storyboards, film-to-storyboard comparisons and an illustrated essay on the making of the film.

One of my favourite films from years gone by, Robocop has stood the test of time. While the special effects may have dated by today`s standards, the witty script and fine performance of Peter Weller have not. He does an amazing job as Robocop, and he is backed by a fine supporting cast featuring Nancy Allen, Ronnie Cox, Miguel Ferrer and Kurtwood Smith. There`s not really a lot to fault with this disc. It`s the definitive version of the film (a slightly shorter, R rated release is also available), presented the way Verhoeven intended. If you can find a copy I definitely recommend you add this to your collection.
posted by Chris Gould on 4/7/2000 06:01
9 / 10

"Dead or alive you`re coming with me" is one of those
great lines from the movie called Robocop which has now
got it`s way to my dvd collection.

It`s been quite many years since I last time saw this film and it was great to see it from the dvd disc (as the many others). The price was quite high, but when I read about this Criterion Collection
and that it`s gonna be the unrated director`s cut, including "excessively violent" shots
I needed to buy it right away "that ofcourse wasn`t the only reason". The main reason
was that Robocop is also one of my favourite action science-fiction films and to be a dvd collector
you gotta have this one, well certainly if you`re a fan of Robocop or other scifi movies.

The Dutch director called Paul Verhoeven is the man behind the director`s chair of Robocop and he
is known from movies like Turkish Delight, The Fourth Man, Total Recall and Basic Instinct.
I have always liked Verhoeven, because he`s so straightforward director and he has got the guts to
show the sexual & violentic + futuristic visions with his own style (There`s actually many similarities between Robocop and Total Recall) and there`s only one other fearless director and he is David Fincher.

Almost everybody knows the story / plot of Robocop, so I tell it shortly. In the beginning the character called Clarence Boddicker (Kurtwood Smith, known from that funny 70`s show plays one of the most ruthless criminals of the action film genre) and his gang cheerfully kills the OCP police officer called Murphy (Peter Weller). Murphy`s spare parts get recycled into the Robocop. Next the cyborg Murphy goes on his own personal crusade and starts to hunt those killers and as the story goes on Robocop`s gotta face Jones`s (Ronny Cox) own Enforcement Droid called ED 209 (cool machine), bring order into the city, fight against criminals, sometimes with Lewis (Nancy Allen) help and sometimes without and in the end bad guys are dead meat and that`s it.

Robocop contains lots of cool special effects and "pretty neat" Phil Tippet`s ED 209 slow-motion shots and in this Criterion Collection you can see lots of violence, many extended bloody scenes + ofcourse the melting man (the favourite scene of audience). If you like 80`s feeling with comedy, action, gore, blood and Rob Bottin`s excellent make up then this movie is for you.

The transfer of Robocop is quite good, except that the aspect ratio is non-anamorphic, but luckily changed to the director approved 1.66:1 widescreen, so that you`re able to see everything from the sides. The sharpness is good and the the colors are nice, so the quality seems to be ok. The audio sounds powerful and clear, even it`s a Dolby Surround 2.0, but I really hoped for some remastered Dolby Digital 5.1 or DTS, because this is a such a classic, but still one of the the best sounding Dolby Sur.2.0 I have ever heard.The Musical score of Basil Poledouris (Conan The Barbarian) sounds superb and there`s many exciting action scenes, where the music takes the control (check out the chapter 21 Robocop gets creamed and the Boddicker`s car chase in the end, what a score).

The special features are cool, with interesting audio commentary recorded in 1995 by director Paul Verhoeven, co-writer Edward Neumeier, executive producer Jon Davison and Robocop expert Paul M.Sammon. Then there`s a film-to-storyboard comparison, storyboards, an illustrated essay "Shooting the Robocop"on the making of Robocop, which is about 333 pages long and as I you read it you`ll know lots of new things about this great film.Theatrical trailer with Terminator music, teaser trailer and collectable booklet. Running time is about 103 minutes and I recommend to look the end credits, because it`s got some good Poledouris scores.

The menus are very cool, with some music and moving video clips on the backround. The scene selection offers nice moving pics from the chapters, packaging is keep case and overall this Crit.Col.disc kicks ass. One more thing, if you`re living outside of US and you`re going to buy this disc, you gotta remember that even it`s a region 0 disc, it`s using NTSC colors and you gonna need regionfree dvdplayer or NTSC extradevice to your tv to watch it with colors. No subtitles by the way, but it didn`t matter.

Robocop back in 1987 took the world and critics by storm, it was a fresh idea and has had a heavy influence on science fiction films and has spawned two crap sequels and a TV show! Criterion have been kind enough to include the `Directors cut` with extra violence (as you have come to expect from Director Paul Verhoeven).
The picture is good, the sound which is DD 2.0 is alright. Extras wise Criterion have done a decent job including
an interessting Commentary and the film to storyboard comparisons are entertaining, also there is the illustrated essay on the film, which is very long.
As we have come to expect from Criterion, a good transfer and some entertaining extras. But it is now deleted, so get it if you can find a copy!
posted by verhoeven on 11/11/2001 10:08
8 / 10

RoboCop was a shotgun blast to the face of both film critics and film audiences when it was released back in 1987. Not only was it a success, but it`s also had a huge influence on science fiction films and literature, giving us more extreme violence in movies, and helping to birth the Cyberpunk genre of American literature. As a film, RoboCop ties all of the necessary cinematic elements together - cosmetically making it one of the most successful "comic book" movies ever made.

The special edition materials are what really make this disc hard to not buy. It`s packed to the gills. RoboCop features one of the most awesome commentary tracks I`ve heard, when it comes to pure history and fact. The track features Paul Verhoeven, producer Jon Davison and co-writer Edward Neumeier, and they sure enjoy talking about this film.

The Criterion disc is, as a whole, pretty good. It`s not as prime a picture as I would have liked to see - no anamorphic widescreen - but it`s pretty good. The picture is a bit fuzzy, but the muted colors and harsh metallics are well preserved digitally. The disc looks fine, although with a critical eye you will notice a few problems with the video quality. The sound is pretty much standard, but good. It`s those extras that make this disc a killer, and a must own for fans of sci-fi and RoboCop alike.

Both movie and disc are delightfully acquitted. Criterion shows off what it does best, delivering a decent transfer and sound on a great movie with an awesome set of extras. Highly recommended....if you can find a copy!
posted by Aslan on 9/10/2002 20:01
8 / 10

Released in 1987 Robocop took the world by storm, now classed as one of the best sci-fi films ever made. Director Paul Verhoeven, responsible for some great films such as Total Recall Starship Troopers and Basic Instinct. Peter Weller is Robocop, a dead police officer murdered by Bodicker (Kurtwood Smith) and resurrected by OCP to fight crime in the city. Verhoeven`s bloody stamp is all over the film
especially this `Director`s Cut` which contains even more gory violence, as if the film wasn`t bloody enough! Overall the film is a very enjoyable sci-fi blast!

Only Dolby Digital 2.0 avalible on the disc, which isn`t bad but 5.1 would have been more welcome, but the film would of benefited from a DTS track the most.

The picture is great, as we have come to expect from The Criterion Collection.

The extra footage isn`t that brilliant and doesn`t enhance the film in any way. The Audio Commenatry is Interresting and informative. The rest Comparisons and storyboards. Overall a
good package that could have been much better.