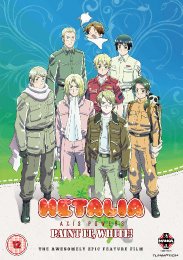 They only went and made a movie of it! Hetalia Axis Powers is that short form anime series, the one with all the nations of the world personified and anthropomorphised, reliving various moments in history, and most particularly the second world war. Butch, gruff and confident Germany makes friends with ace miniaturisation expert, and otherwise shy and retiring Japan, and cowardly pasta-loving Italy tags along for the ride. Against them are the Allies, dismal cook England, and his upstart self-aggrandising hero brother America, psychotic Russia, gourmand France, and Chinatown exporting China... and the one that no-one remembers, north of the US, that one. If the war wasn't bad enough, the United Nations is a venue of total insanity as the top nations in the world try to get along. And all through the series, we were introduced to various other nations in the world, exploring the odd relationships between them through the lens of history. 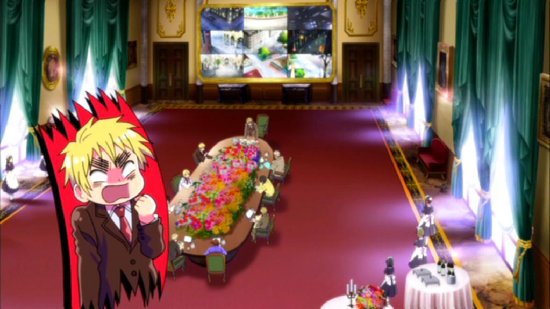 Two series of Hetalia Axis Powers were released on two discs last year, that's around 52 episodes lasting five minutes each. I have to admit that I wasn't a fan of the show, with the short form not allowing for a lot of character or story development, and the humour sticking to the one note caricature comedy, which picked a character trait and beat us to death with it. The English dub only made it worse, overlaying the Japanese observations with incomprehensible (to me) accents, and a US filter of national stereotyping (England got bad teeth as well). For me, Hetalia was a comedy that had a lot of promise, but kept falling flat in the execution. But now Hetalia Axis Powers has a feature film, so maybe Hetalia Axis Powers: Paint It, White! can do in 80 minutes what it failed to do in 5 minute chunks. 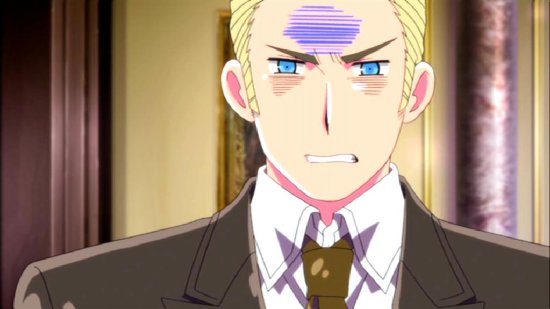 Aliens have invaded. The Pictonians are an advanced race from the most perfect world in the galaxy. They've discovered the secret to peaceful co-existence, and have decided to export it. The first world they select is the most fractious and divided in the universe, Earth. Now Pictonian ships are in the skies, their weird rays draining the colour from the Earth, turning all the humans into Pictonians, faceless, and colourless aliens with green antennae sprouting from their foreheads. What can the nations of the world do against such a menace? They can't even agree on what to do. Well America can, but he's agreeing with himself and expecting everyone else to follow. In fact, surprisingly it's Italy who comes up with a suggestion, but he only meant it as a joke. As the situation spirals from bad to worse, it looks as if the impossible will come to pass. The fate of the world will rest in Italy's hands. But what can he do, the Pictonians won't even accept his surrender. What's the meaning of a white flag in a world where everything is white? 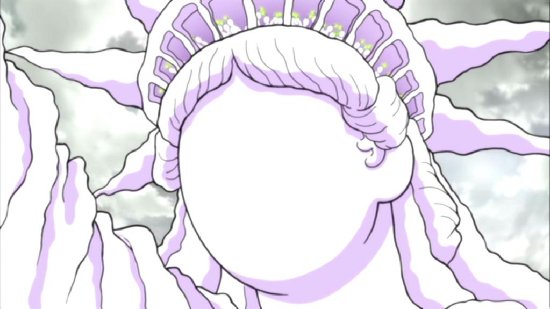 Hetalia Axis Powers: Paint It, White! gets a 1.78:1 anamorphic transfer on this DVD. It's a native PAL conversion, with the 4% speed up as you would expect. The image is clear and sharp, but Hetalia isn't exactly a property that pushes the limit of the DVD medium. It's an anime that's lower in resolution, with simple character designs and fairly limited animation. This does kick up a gear for the feature film though, and the backgrounds get a serious upgrade in definition and quality of artwork (until the Pictonians arrive and turn everything into line art, which must have saved on the film's budget) It's an adequate animation that is brought across without problem on this DVD. 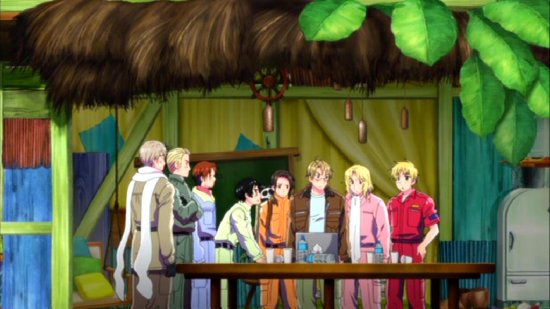 You have the choice between DD 5.1 Surround English and DD 2.0 Stereo Japanese, with optional translated subtitles and signs. I was more than satisfied with the original language track, after all, you haven't heard 'Pasta!' effeminately screamed until you're heard it in the original Japanese. The English dub adds the inscrutable accents and the US-centric comedy that you'll be familiar with from the series. This time around the movie offers sufficient scope to warrant a surround track, and the music and effects do get some space to breathe with the English dub.

The disc gets a static menu and a jacket picture for when it's at rest in the DVD player. There is also a smattering of extras for you to appreciate.

My favourite is The Hidden History Hidden Within Hetalia, a series of text pages that explore the various historical references in the movie, shedding light on the real world events.

Hetalia: The CAPSLOCK Commentary is the traditional Funimation free for all, where the ADR director and cast for the film make a loud noise for the duration. There are so many of them that they take it in shifts to see how long I can bear it before I switch the commentary track off. 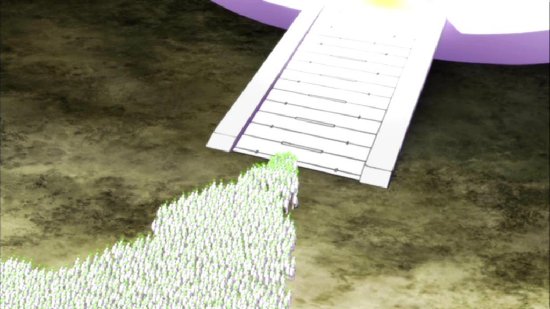 The Opening Day Stage Greetings sees director Bob Shirahata and the three voice actors behind the axis nations introduce the film to an eager cinema audience. This lasts 12 minutes.

Finally, you get the theatrical trailer, and 3 minutes worth of unfunny English dub outtakes. 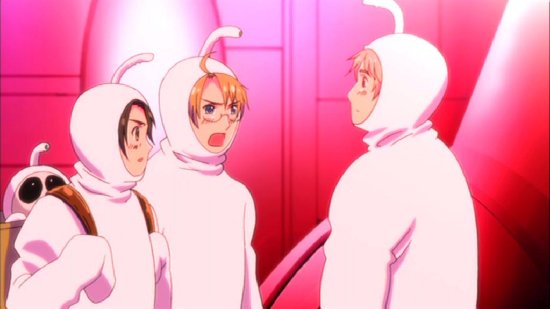 Any impression I had that the long form movie would give the comedy a chance to develop was shattered pretty quickly as the Hetalia movie established itself to be just like the TV series. In fact, having to sit through 80 minutes of the quick fire gag format, instead of easily digestible 5-minute chunks did even less to endear me to this show. I liked the Hetalia movie even less than I did the Hetalia series. Coming at the property after close to a year's absence, I found that I had to reacquaint myself with its comedy stylings, and went through a process of 10 minutes of 'what the hell am I watching!' followed by 30 seconds of 'this might be the funniest thing ever', and then the remaining time thinking 'okay, I get the joke now, you can stop... please stop... stop now... will someone please make it stop!" 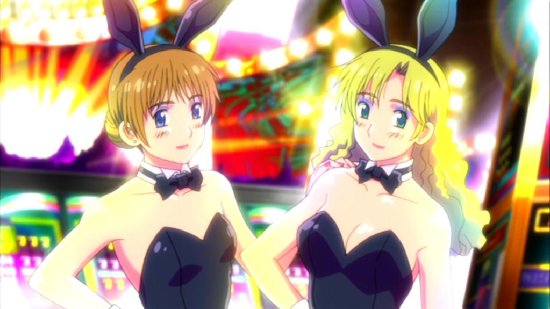 Not a Hetalia fan then, which apparently puts me in a minority compared to the average anime aficionado, if the popularity of this show is to be believed. So let's take it as read that I'm not going to extol the virtues of this anime. What do fans of Hetalia get from Paint It, White!? It's the same quick-fire gag format, still playing on national stereotypes, and with character designs which for some incomprehensible reason appeal to the 'boys' love' fanbase out there. Hetalia causes girly sqees wherever it goes. What's different in this movie is that there is an ongoing storyline, the Pictonian invasion, and how our intrepid band of stereotypes deals with it. So we get this storyline developing, interrupted frequently by a burst of sketches with the characters in other settings and times, in fact structured much like the TV series. Silly stuff will happen, those running gags from the series will be referenced, and all the characters from the series will get an appearance. 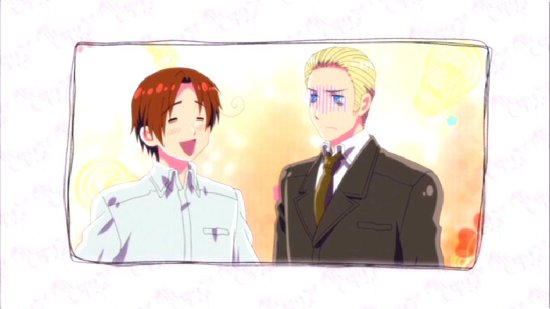 Basically with this review, you're going to get a cop-out summation. If you like Hetalia Axis Powers, you'll like Hetalia the Movie, as it delivers more of the same. I don't like Hetalia, so if you want a more detailed analysis, you'll have to find a Hetalia fan. Fortunately there are lot more anime fans out there that like Hetalia, than there are anime fans like me that don't. There has to be, as the next series, Hetalia World Series is out next month in the UK.