A little while after posting this article, the disappointing news came from Kaze that due to a delay in the dubbing schedule, Tiger and Bunny won't be seen in the UK until early 2013, shifting from original October 2012 release date. 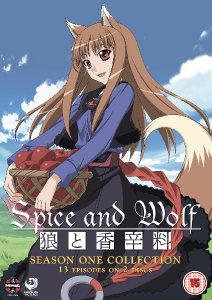 Straight into the reviews this week, beginning with the arrival in the UK of the fan acclaimed Spice and Wolf: Season 1. If you venture onto any anime forum, you can usually find a little niche within that niche extolling the virtues of mediaeval economics as seen through the adventures of the wandering peddler Kraft Lawrence and the wolf deity Holo that accompanies him. The temptation, which I admit that I succumbed to, was to dismiss this as yet another show targeted at fans of all things furry. After all, a cute girl with wolf ears and a bushy tail, who we first encounter naked, all tends to put a certain preconception in your mind. Ditch the preconceptions, as Spice and Wolf is a whole lot more than that, as I found out in my review. 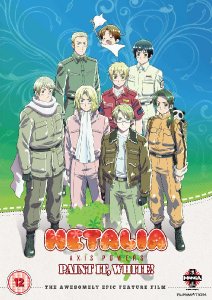 A whole lot less is the Hetalia Axis Powers: Paint It, White! I'll admit that I'm not a fan of national stereotypes personified, re-enacting key moments in history to comic effect in short form sketch comedy, with fan perceived, homoerotic overtones. But then, what do I know? Fans of Hetalia will be happy to know that the Hetalia movie is just like the series, but with added aliens. If you're like me, you're probably sighing in resignation at the realisation that this is only the beginning. The Hetalia World Series... series is coming next month. 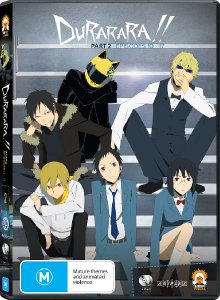 At least I got to end the week on a high note, with a review of Durarara!! Part 2. Durarara is that fantastic explosion of narrative and character from the creators of Baccano! I got impatient waiting for the UK to finally see a dub release, so I went and imported from Australia instead, hoping that they would also fix the errors reported on the UK sub only release. That didn't quite turn out to be so when I reviewed Part 1 last week, but thankfully the problems were all corrected for Part 2. As for what happens in these episodes, it's kind of hard to explain in just one paragraph, but I can say for certain that aliens most definitely do not invade... kind of...