This weekend it's been Anime Expo in the US, and in the bit of the country where they haven't had a power cut, so the news has been coming out like a torrent of exciting stuff. Crunchyroll announced ten of the new shows that they're streaming for the summer season, Funimation dropped a bomb worth of new licences, and Sentai just won't shut up about all the new stuff that they have coming.

Rather than kill my fingers typing all that stuff out, I'll just link you to UK Anime Net's articles on the new physical licenses, and the new Crunchyroll offerings. And since the Expo announcement, Crunchyroll have further announced the arrival of the second season of Cardfight Vanguard.

Personally I'm most excited about the new Lucky Penny label from Nozomi Entertainment, which is kicking off with three shows I thought would never get an English territory release, after I fell in love with them when they aired on Crunchyroll. I'm already saving up for Aoi Hana, Hyakko, and coming first this autumn, Ristorante Paradiso.

Another show which has never seen a legal English language release of any kind, not even streaming, is Michiko & Hatchin, a South American set road movie of a show, which calls to mind comparisons to Cowboy Bebop and Samurai Champloo. I loved it to bits when I first saw it on fansub, and I have to say... About Bloody Time! Funimation will be releasing it, and if UK companies have any smarts, they're already in talks about licensing it.

Blue Exorcist Gets A Dub But...

Viz has announced that Blue Exorcist, which has previously seen a sub only home video release in the US, will get a dub for online streaming this year. Manga Entertainment have Blue Exorcist lined up for a subtitled only DVD release in August, and they are continuing on regardless, saying that waiting for dub materials would delay the release until the end of 2013. They have previously said that they will release a dub version as well when it becomes available, but the last time they started with less and promised more, K-ON! and its subsequent Blu-ray, fans who decided to wait for more resulted in such low sales of the less, that the more got cancelled.

Evangelion 3.0 Finally Has A Release Date

While the industry bigwigs may have been wigging out at the US Anime Expo, one seriously awaited bit of news was being released in Japan. The third Evangelion rebuild movie, You Can (Not) Undo, finally has a theatrical release date. Japanese fans will be able to see the next, long awaited instalment on November 17th 2012. That's about 12 to 18 months to get it licensed and released in the US, and a similar date for the UK, I'd save up a few quid and book some time for June 2014. Although I'm sure it will be doing the festival circuit from early 2013. Scotland Loves Anime anyone? 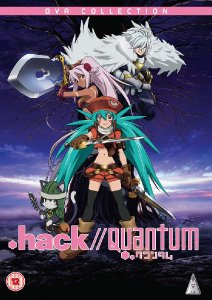 I'm like the villain from Se7en. I don't have any fingerprints left. In my case it isn't through self-mutilation, but rather through the sheer amount of typing that wears them out. Last week was pretty intense on the old digits, with five titles reviewed that anime fans might appreciate. I got my release dates mixed up and actually watched .hack//Quantum first, although really it was to get it out of the way. I don't like RPGs, and I especially don't like MMORPGs. The .hack series is an extensive franchise about MMORPGs. The manga and the various anime incarnations are about people who play a futuristic online game, while you can have a go yourself on the .hack console games. It's a nightmare to keep track of, what with some OVA episodes only available with the games. .hack//Quantum was my first experience of this universe, and to my surprise it was a rather entertaining show, beautifully animated, and self-contained too. You don't need to have seen any other .hack to enjoy it. 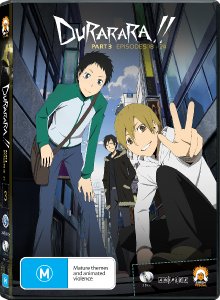 I finally took a look at Durarara!! Part 3 as well; the conclusion of the narrative mayhem inspired by the Ryohgo Narita light novels. There is so much anime out there that is like other anime out there. New ideas are rapidly joined by sequels and spin-offs, homage and rip-offs, and before you know it, something unique and original is soon part of a genre. It's been a few years now, but there's nothing else like Durarara!! and Baccano! on the market. You really have to see this show to appreciate just how good it actually is. 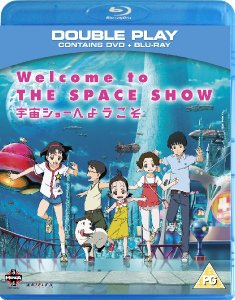 Next up was the long awaited family movie, Welcome to the Space Show. It's been delayed a while, but coming out now makes it the perfect movie for the family this summer, when there's nothing on but the Olympics, the trains and buses are all on strike, and you can't afford the ice cream at the over-priced seaside resorts anyway. Two hours with Welcome to the Space Show, and it's like taking the kids on a sightseeing trip around the galaxy, without leaving your sofa. Five children go on an amazing adventure when they meet a talking dog from outer space. 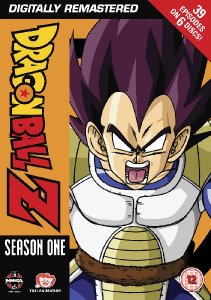 It's Dragon Ball Z: Season 1! After all these years, we finally get Dragon Ball Z on DVD, and I got to look at the first season of episodes, all 39 of them. Dragon Ball Z is what turned many people into anime fans in the first place. It's the original gateway drug. There's a whole lot of nostalgia for this anime classic, but given a low budget action show which is pushing 25 years, some may question whether it is still relevant to modern audiences. I take a look and see. 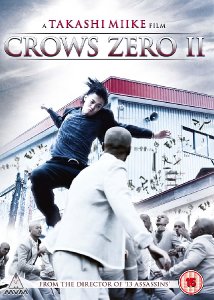 Finally, some live action cinema for fans of anime and manga, as I take a look at Takashi Miike's sequel to Crows Zero. Crows Zero II is the conclusion of the prequel story to the Crows manga, and like the first film, it's all about high school, gangs, delinquents and people beating the tar out of each other. Expect comedy, histrionics, melodrama, rock and roll, and relentless fist-fighting action. West Side Story isn't a patch on this!

Manga Entertainment release Dragon Ball Z: Season 1 on DVD today, while Welcome to the Space Show is also released today, on DVD, and on Double Play Blu-ray and DVD. MVM release Crows Zero II today, while .hack//Quantum will be released by them next week on the 9th of July 2012. Durarara!! Part 3 was released by Siren Visual last year in Australia, and they have just released a complete series collection if you want more convenience.