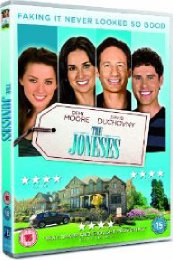 Blu-ray
I Love You Phillip Morris

The Joneses
Keeping up with the Joneses. A saying that's been around as long as I can remember and is that annoying phrase about people you know, nearly always neighbours, who spark envy in you as they parade their latest purchases; cars, gadgets, furniture, etc. Keeping up with the Joneses, or the endless array of gadget, fashion or reality shows that have part taken that role in the modern world, is one of the great drivers of the wonderful world of credit. There are loads of places, TV shows or newspaper/magazine articles to tell you what is currently hot, but what if someone actually took this to the next level?

Steve (David Duchovny) and Kate Jones (Demi Moore) move into a new suburban neighbourhood with children Jenn (Amber Heard) and Mick (Ben Hollingsworth). The family seem to have it all and are soon the envy of their rather posh surroundings, a neighbourhood full of mansions and the trappings of the upper middle class of America.

The beautiful and sexy Kate is the ultimate trend setter, dressed from head to toe in designer labels with the best beauty treatments. Steve is the laidback successful businessman with the latest car and the very best in high-end gadgets and high-tech toys. Meanwhile Jenn and Mick rule the roost at their new school, being the hip trendsetters amongst their peers with cool clothes, the best make-up and gadgets for their generation. It's not long before everyone is trying to keep up with the Joneses…

Amongst them are the Joneses immediate next door neighbours with whom Steve and Kate strike up a friendship. Summer (Glenne Headley) is desperate to be a successful saleswoman for the cosmetics company that she attempts to sell for. Summer is forever listening to self-marketing tapes and trying to focus on being successful. Larry (Gary Cole) is Summer's wife but fears he has lost her to her sales obsession and finds a good friend in Steve, who uses his own experience with Kate to advise Larry on how to put the zing back into his marriage.

But things are not quite how they seem. In public, Steve and Kate seem to have the perfect marriage but behind doors things are very different. The family is actually a sales unit and none of the four family members are related, each one a sales person trying to set the trends so that their sales numbers will rise and hopefully see them reach the legendary Icon status. Kate will only talk to Steve in private about raising his low numbers before he goes the way of her previous 6 'husbands', no one seems to agree with Steve's idea of relaxing and doing something together to bond.

For a while, things go rather well with the numbers of sales rising considerably based on the quartet's separate sales activities that are so discreet that none of their friends realise what is going on. Then two things start to happen. The family starts to fragment as first Steve and then the two children feel trapped by the confines of their cover and look to break out, Steve obviously attracted to the business-like Kate, whilst Jenn looks to hook up with an older man and Mick has something entirely different going on. More worryingly, Larry is starting to feel a little inadequate next to Steve and goes all out to prove himself to Summer, with tragic results…

I have to admit that I was a little intrigued when I first heard about this film and saw the accompanying trailer. What surprised me though was that I wasn't actually surprised by the central concept of the film. It's well known that whilst billions is spent on advertising, the best kind of recommendation comes from word of mouth, particularly someone you trust. So is it too much of a stretch to have a sales team attempting to influence your opinion in the guise of neighbours so you're not even aware that the sales pitch is actually happening? If anything, I would actually be surprised if this kind of thing isn't happening in some format.

Another recent concept within films is the idea of product placement which is an annoying but direct way of influencing what you buy based on what you see on the screen. Some of the recent James Bond films were especially guilty of this and as you might expect in a film that is a satire of sorts on advertising then there's a string of product placements here, but this time wrapped up in the script as part of the story for our main characters to recommend to buy rather than just seen as gadgets that the hero will just happen to use. The film also explores different ideas of sales technique so you'll see Steve subtly schmooze and influence the junior golf instructor who just happens to then recommend the very products that Steve has shown him, allowing Steve to then step back and allow others to do his work for him.

Despite Demi Moore being the A-list star, it's actually Duchovny who steals most of the screen time as the rather laidback Steve. This casualness is something that appears to endemic in Duchovny's acting style and he is perfect here as the foil for Moore's rather uptight head of sales. It is Steve as well who sees the flaws exposed within the private relationships of the family/unit and wants to draw them together, although as professional workers the others really just want to go their own way at the end of the working day, despite all living in the same house.

Presumably in order to make this film more accessible to mainstream audiences, the satire is wrapped up in a rather typical rom-com overarching plot with a will they or won't they chemistry going on between the two leads. Despite sounding a little lame, it does work with Moore showing signs of thawing under Duchovny's relaxed charisma. With both Heard and Hollingsworth also good in their roles, I need to mention the rather understated but no less powerful role played by Gary Cole as the increasingly desperate Larry, who turns out to be the catalyst for where this story ends up.

Despite it's rom-com trappings, this is a rather thought-provoking film that may just find a wider audience by appealing to those who like the former…