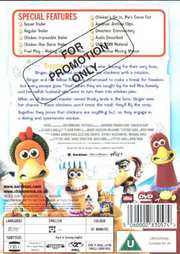 Back Cover of Chicken Run

DVD
Road to El Dorado, The (US) 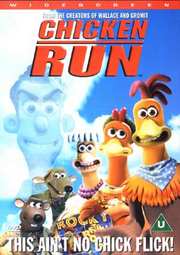 Synopsis:
Rocky the rooster and Ginger the chicken decides its time to rebel against the evil Mr & Mrs Tweedy, owners of the chicken farm where they are held.

Together with the farms` other chickens they lead a great escape from the murderous farmers, and their certain doom!

A great family film with loads of extras including clips of Aardman classic`s including Morph and co. I love in the film the references to the Great Escape! Excellent sound including Dolby Digital and DTS ( One of the few Region 2 titles to include DTS ). If you love Wallace and Gromit then you`ll love this film. As Wallace would say A Crackin` Film Gromit!
posted by David Garner on 8/12/2000 18:29
2 / 10

Released at roughly the same time as Mission Impossible 2 on both DVD and cinema release, it certainly doesn`t take too long to figure out which is the most ingenious creation of the two.

And the disc itself is simply unbeatable. Picture and sound are fantastic, even on the cheapest of budget players (having tried on both the Alba 103 and a more expensive Aiwa 370). As for the special features - I still haven`t had time to go through all of them. Worthy of mention is the fascinating behind the scenes footage of "Chickens Go In, Pies Come Out", and clips of other Aardman material such as Creature Comforts and those famous TV adverts.

Chicken Run is a highly entertaining film on a good DVD. It has a very sharp transfer and a well suited soundtrack. The extras are interesting and quite original.

Ever wonder what chickens do when you're not watching? Me neither - but this is the premise of 'Chicken Run', a terrifically entertaining film for children and adults alike. 'Chicken Run' marks the debut feature-length film from Aardman Animation; the creators of the award-winning 'Wallace & Gromit'.  A marvel of technology and simple good storytelling, Pathé offers a wonderful DVD presentation. The film tells the story of a group of chickens who, lead by the tireless Ginger (Julia Sawalha), devise one scheme after another to escape Mr. and Mrs. Tweedy's chicken farm, only to fail time and time again. The chickens planning bear a heavy price. If they do not meet their egg-laying quota, they can find themselves on the dinner table! A glimmer of hope arrives from the sky, as Rocky the Rooster (Mel Gibson) lands inside the fence and makes a deal with Ginger to teach her and the rest of the chickens how to fly, in exchange for letting him hideaway from the Circus, where he was a main attraction. The chicken training begins lead by Rocky, and while they show little promise, they never lose hope. But the situation becomes extreme as Mrs. Tweedy, tired of making miniscule profits from the eggs, orders a pie-making machine, a terrifying metal deathtrap where chickens go in, and pies come out. With time a matter of grave importance, the chickens have to band together and hatch what must finally be a successful plan or risk ending up on the shelves of every grocery store in the county.

The jokes are funny and the various visual, and aural gags thrown in because Nick Park and Peter Lord thought they were a good idea mean that you will have to watch the film more than once to get them all. The basic story is 'The Great Escape' - but seeing the bits from 'Raiders of the Lost Ark', 'Braveheart', 'Star Trek', and even 'The Archers' is more than enough reason to watch the film again. The beauty of 'Chicken Run' is the chickens themselves. The animation is immaculate. The level of emotion the creators pull from two eyeballs is a revelation. There is no doubt these characters are alive and this is most impressive feat in any Aardman film, especially in this one. As for the movement of the characters; just watch Rocky and Ginger run through the pie-making machine or watch the final chase scene and you may find yourself shaking your head and wondering how did they do that? The camera is moving, the characters are moving, the backgrounds are changing, and it all comes together flawlessly.

Presented in 1.85:1 anamorphic widescreen ratio, the video looks stunning. The detail is so fine that had there been any fingerprints or any kind of imperfection with these clay creations you would be able to see it. Animation films offer a great canvas for the use of sound. This disc, which offers you a choice of Dolby Digital 5.1, DTS 5.1, and Dolby Surround 2.0, is no exception. As expected the DTS sounds fuller, particularly in the low end during most of the scenes with the pie-making machine, but the Dolby Digital track is not disappointing in the least. The score is quite wonderful and the surround farm noises make for an enjoyable listen.

There are a number of special features on the disk. The commentary with directors Peter Lord and Nick Park is technical and enlightening. Also included are two behind-the-scenes Featurettes, the first 'Foul Play: the Making of Chicken Run' spends a lot of time with the actors and going over the story and offers some basic information on the animation process, recording the foley effects, and composing the score. The second featurette, called 'Chickens Go In, Pies Come Out' repeats some of the stuff from the first featurette but concentrates on (as Nick Park puts it) The Death Star of Chickdom - the pie machine. There are also a series of clips from other Aardman shorts. The strangest feature is 'Audio Described' where a nice lady tells you what is going on on screen - starting with "The word Pathé is in yellow on a white background and swings round to form the silhouette of a chicken!!!" (Actually the Pathé symbol is a crowing rooster).

The disc also boasts the cinema teaser and two trailers, including the 'Chicken Impossible' spoof but the 'Gladiator' spoof (which I have not seen) is for some reason only on the R1 disk. It could be that as both 'Chicken Run' and 'Gladiator' were DreamWorks films in the US it could not be used over here.

The DVD-ROM feature is completely different from the US R1 version. Instead of games and other kids stuff there is an excellent interactive study guide created by Film Education that explains how films are made, and, using 'Chicken Run', shows how characters are created and voices added.
posted by Tony Myhill on 27/1/2002 19:35