DVD
Prince of Egypt, The (UK) 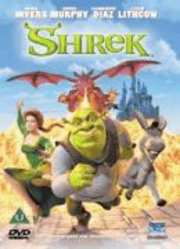 Synopsis:
Shrek is a big ogre who lives alone in the woods, feared from all the people in the land of Duloc. When Lord Farquaad, the ruler of Duloc, exiles all the fairy-tale beings in the woods, Shrek looses his peaceful life and his home becomes a refugees camp. So, he sets to find Lord Farquaad and convince him to take the fairy-tale beings back where they belong, and leave him alone. Lord Farquaad accepts, under one condition. Shrek must first go and find the beautiful young princess Fiona, who will become Farquaad`s bride. So, the big Ogre begins his quest, along with his newfound donkey friend...

I can`t add anything to Richard Booths comments, spot on. Except .....

Having bought a microphone - I tried the DVD in my PC for the Shrek`s ReVoice Studio extra. My PC came with Zoran SoftDVD, I had to accept an InterActual player for the extras and that was as far as I got. Error message was "DVD region does not match that in the drive." After some searching around on their website they state that older versions of ZoranSoftDvd do not work with their player. I was prompted to buy SoftDVd Max or WinDvd4. Nothing is ever simple!
posted by merlin28 on 3/9/2002 21:16
10 / 10

I`m seldom so thoroughly satisfied with a film as I am with each return to SHREK. There is a flaw, but that`s just a personal niggle about Mike Myers` odd Scots accent for Shrek himself, but in all other aspects it is an excellent 80 minutes and a complete family favourite.

Funny, fast-moving and intelligent. Old-fashioned storytelling with a beginning, middle and an end. No loose ends, no wasted time, nothing remotely controversial or offensive. For once, a film that doesn`t just soak away your I.Q. but equally doesn`t want to challenge you to do anything more than have a good time. I still laugh at absolutely everything, especially the fart joke.

Exceptional visuals, both in the original animaton and the transfer.

MOVIE
Well, PDI Dreamworks prove they are the perfect competitor to Pixar. Although they both use CGI animation, they both have very different types of movies. The animation of Dreamworks is much more real world, whereas Pixar go for a cuter, rounder image with their characters. Personally I prefer the Pixar movies. I feel they have better characters, better storys and are generally more original. The one major problem with Shrek is that the story is a bit boring and unoriginal. Having said that, the movie is very funny, and just takes the Mickey out of so many films, as well as out of Mickey himself, well, the company at least. Dulock is very much like a certain film companies themepark isn`t it! There are so many small jokes to pick out in Shrek, it just isn`t like Pixar movies, which just work because they have more charm to them I feel. I don`t like the modern feel of Pixar films with their all star voice actors etc. Donkey is also the standout character here. I also wonder if Pixar and PDI Dreamworks have spys on each other, because, Pixar had the one up on Toy Story, but there`s been-
Shrek, Monsters Inc. (based on monsters)
Antz, A Bugs Life (All about insects)
and Finding Nemo, Sharkslayer (underwater)
who`s copying who?

VIDEO
Taken from a digital source, this is an impecable 1.85.1 transfer, and there is no grain or any problems.

AUDIO
The audio likewise is perfect, but there is no DTS track on this. The UK set was only 1 disc, for some reason we didn`t deserve the 2 disc US set till later.

EXTRAS
Although it is a one disc set, there are quite a few extras. There is an audio commentary which is quite interesting to listen to, as well as quite an extensive making of of the film, with some very funny CGI bloopers. There is also a specially produced Karaoke Scene, which is amusing, if only for a few times. For some reason though, it appears when the film ends, from a hidden icon on the main menu and also in the Special Features menu. Also available are some OK games, and a Revoice studio which requires far to much equipment for most kids to even bother with. The menus are also nicely animated.
posted by cartoonjonah on 13/6/2003 00:12
5 / 10