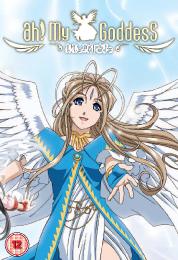 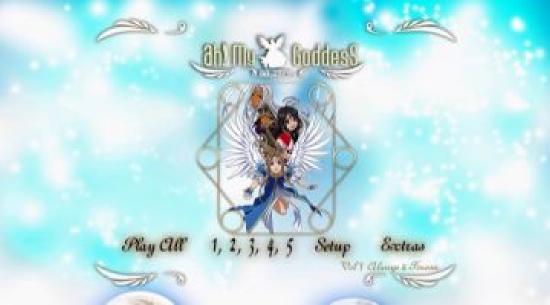 Anyone who's taken the time to read my reviews of late will know that I'm trying to be more disciplined about cutting to the chase. No more procrastination and lengthy rumination. According to the depressing web research I exposed myself to a couple of weeks ago I have about seven seconds to grab your attention.

So - before I lose you, here's a quick overview. 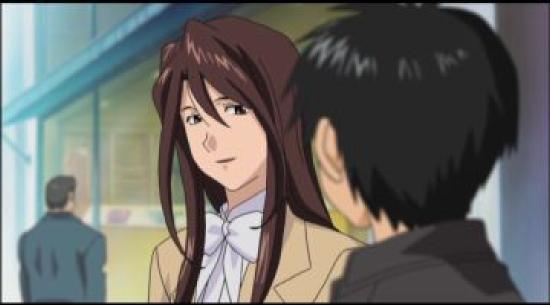 'Ah! My Goddess' - The TV Show is, in my humble opinion, fan-bloody-tastic. For those with long memories, it has all the content, charm and comedy of 'I Dream of Jeannie' (using pretty much the same narrative), melded with the warmth and fun of 'Love Hina'. Spanning some seven discs and 26 episodes, there's never a dull moment. 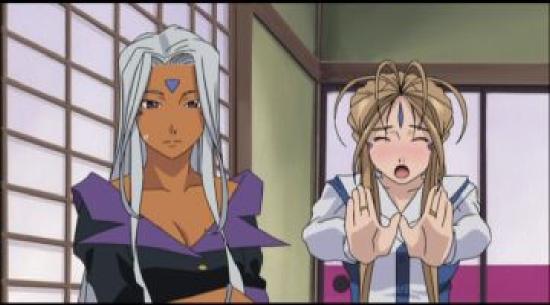 It's also nice to view anime in 16:9 - still not as common an occurrance as it ought to be. The picture quality is great, the animation top-notch (classic anime style) and the English dubs really good. In short - if whacky, romantic teen comedy is your brand of anime then this is for you. And with the whole series collected together in one sensibly priced set, there's really no excuse.

So with that out of the way, for the more studious reader, here's a bit more detail. (Oh - and by the way, check out fellow reviewer Jitendar's superb single disc reviews on this site too. They are the self-same discs that make up this set). 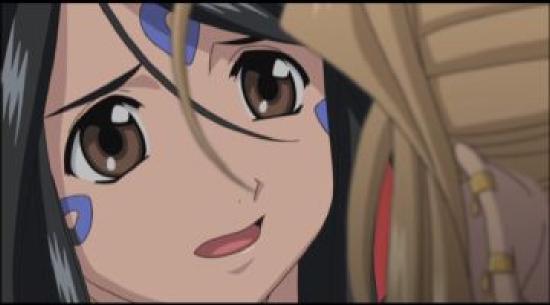 Ah! My Goddess is based on the original story by Kosuke Fujishima, and originally serialized in Kodansha's monthly magazine 'Afternoon'.

Airing originally in 2004, and following a recent 5 episode OVA and a feature film, this series won accolades from purist Manga fans who thought this was a more faithful reflection of the original. 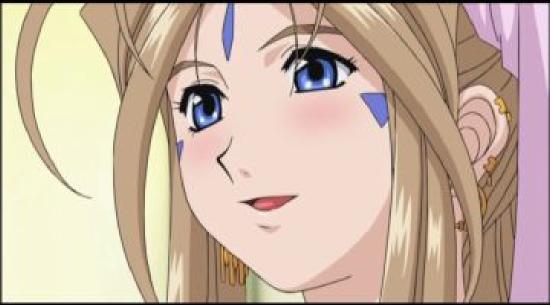 College geek and motorcycle anorak, Keiichi Morisato can't believe his luck when he mis-dials a call and gets put through to the 'Goddess Helpline'. Before he has time to say 'wrong number' a beautiful jeannie-like Goddess (Belldandy) steps through his bed-sit mirror. Given one wish, he asks for girlfriend like Belldandy to be at his side forever. And so starts a series of 'I Dream of Jeannie' like farces - often humourous, occasionally romantic, but always fun. 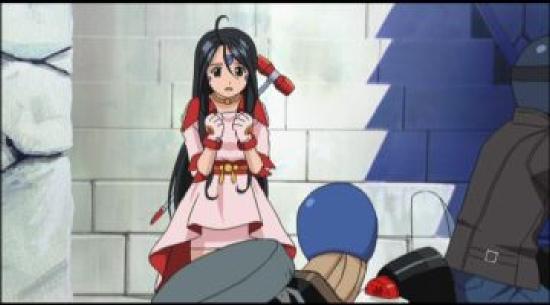 The first challenge to face the new couple is finding a new home as his dorm doesn't allow girls - particularly not the 'live-in' variety.

Luckily, after a series of mishaps, they happen across a sadly neglected Buddhist temple occupied by a single priest. He offers lodgings in exchange for some arduous tasks. When he witnesses Belldandy's power, he decides he needs to also reach a new level of enlightenment and he decides to go on a lengthy trip, leaving the temple in the young couple's care. 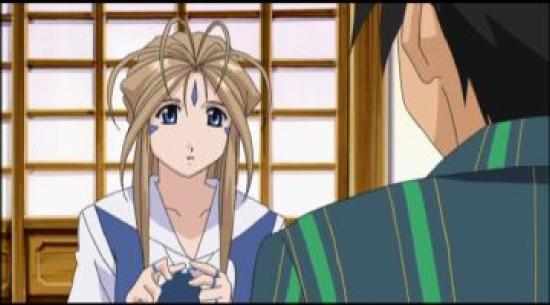 The couple's real troubles begin when Belldandy accompanies Keiichi to Nekomi Tech, his chosen college. The beautiful Belldandy quickly becomes the belle of the ball and no one can figure out how a geek like Keiichi could have pulled such a girl.

Having been ignored by previous campus queen, Sayoko, she suddenly becomes interested in Keiichi, and is determined to split the perfect pair up. But try as she might, she cannot displace the ever-good Belldandy. A power called 'the system force' prevents her from seperating the couple in any way without unpleasant consequences. 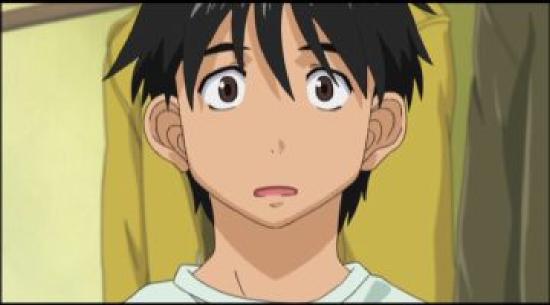 In any case, even Sayoko can't dislike Belldandy for long who is consistently naive and good-natured, only ever able to see the good in everyone.

The episodes generally follow the same gentle story arc yet never lose their appeal. The relationship between Keiichi and Belldandy helps glue things together in an enjoyable way which will have you ready for the next episode - and the one after that. Will they ever kiss? Will Keiichi be able to tell Belldandy how he really feels? And does she feel the same way? Or is she with him simply out of a sense of duty? I won't spoil things here - except to say you won't be disappointed. 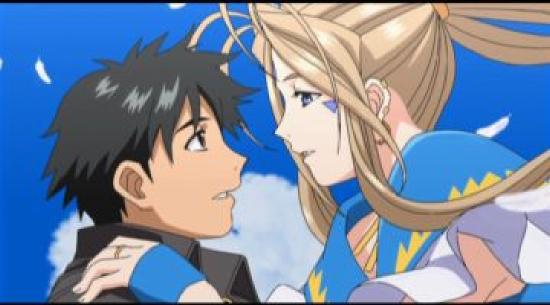 After about 6 or 7 episodes, when things look like they might run out of steam, Belldandy's sisters start to arrive - and just like the injection of new life into the Big Brother house - the newcomers bring with them fresh interest that really sustains the show over the entire 26 episodes.

The animation throughout is fairly standard for its genre - quite simplistic but with nice colour depth and imaginative visualisation in terms of angles, points of view and so on. 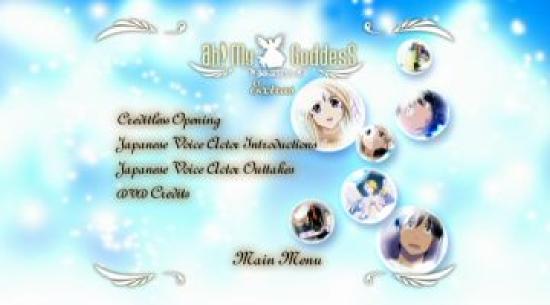 The soundtrack is pretty cool too, starting off proceedings with what seems like violin-fuelled folk but soon settling into a warm, entirely appropriate score.

The discs are a little light on extras though the launch event shown here (with original Japanese voice-artistes) is pretty good fun. 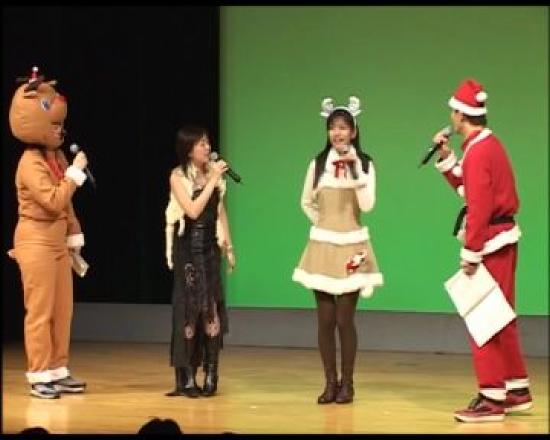 With an RRP of under £50 (with a probable street selling price of a few quid less) this is surely the only way to buy this fantastic series, which I've seen retailing for as much as £20 per disc in Zavvi (why don't people shop online?). 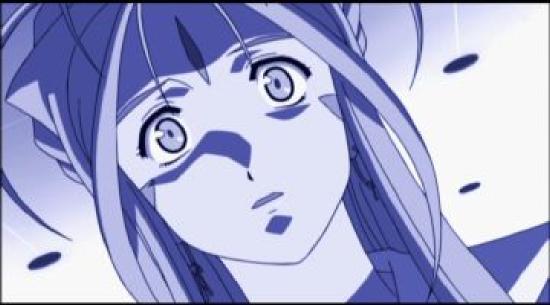 It may not suit those who like their anime full of violent fighting action, or robots that transform into fighter planes, or those looking for something a little bit (ahem) 'saucier'. But for anyone who enjoys good light entertainment (of the 'Love Hina' variety) then this is one series you really won't want to miss. And now it's been issued in a single reasonably priced R2 set you really have no excuse not to get it.