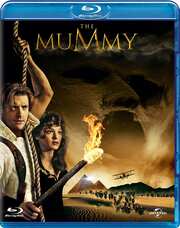 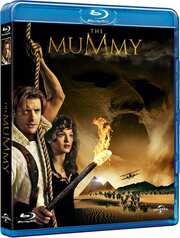 DVD
Mummy, The: Ultimate Edition (US)

Review for The Mummy

I got my first Blu-ray player pretty late; it’s been barely nine years at this point, and if you recall my reviews at that time, I made a big noise about being selective with the films that I double dipped upon, going for the titles with the most obvious benefits to be seen in HD, the absolute classics, and the films that I love more than any other. At the time, I thought that might be a couple dozen Blu-rays at the most. Right now, I have 84 store bought feature films left on DVD, a few of which, like True Lies and Titan AE are yet to see a Blu-ray release. There are also a few TV shows, and a wodge load of anime on DVD that’s likely never to see Blu-ray versions, but when you consider that for over 10 years previously, I had double-dipped all of my VHS to DVD, and had been buying on average two films a month, you can see where my initial good intentions finally wound up. Most of my DVD collection has turned into Blu-ray at this point. God help my wallet if I ever buy a UHD player! The latest film that I wouldn’t have got on Blu-ray 10 years ago that I’m watching now on Blu-ray is The Mummy, the Brendan Fraser one, not the Tom Cruise one.

The story is classic Saturday matinee stuff, the search for lost treasure in the depths of Egypt whilst being chased by hordes of mummies. Rival groups of treasure hunters set out for the City of the Dead, Hamunaptra to find the riches of the Pharaoh, Seti. Instead of finding countless riches, they unearth the remains of Imhotep, the mummy of the title. After a mishap with the Book of the Dead, Imhotep returns to life and begins to prey on the defilers of his tomb to regenerate, and attempt to resurrect his true love. Rick O’Connell and his fellow treasure hunters must stop the mummy before he realises his evil plans and brings eternal darkness to the world.

The Mummy gets a 2.35:1 widescreen 1080p transfer with the choice of DTS-HD MA 5.1 Surround English, DTS 5.1 Surround French, Italian, German, Spanish, and Japanese with subtitles in these languages and Danish, Dutch, Finnish, Korean, Norwegian, Portuguese, Swedish and Mandarin. This transfer is getting on a bit, but still stands up well today. The image is clear and sharp, and detail levels are good. The light level of grain indicates that some DNR has been applied, but skin tones remain realistic and consistent. There might be the odd blown white, but these are desert sequences. Once again, nothing ages faster than CGI, and there are plenty of plasticky looking sequences now which fail to impress in the same way that they did in 1999. However, the background extensions and replacements to create ancient Egypt and the Egypt of 1926 do still sell the story. The audio on the other hand is really quite impressive, immersive and very effective in bringing across the action sequences, and Jerry Goldsmith’s adventurous score. The dialogue remains clear throughout, but the disc generates the captions for the film with an unimpressive font.

You get one disc in a BD Amaray case and an o-card slip cover. The disc boots to Universal’s stock animated menu.

The disc really offers a lot more in the way of extra features compared to the DVD, although those extras are repeated here too. Given the age of the disc, all of the video extras are in SD.

An Army to Rule the World, Part 1 lasts 4:02.
Unravelling the Legacy of the Mummy lasts 8:07 and looks at the old Universal Horror with Boris Karloff.
Building a Better Mummy is the 49:55 making of documentary.
There are 7 Storyboard to Final Film Comparisons.
The Photograph Montage is a 4:18 slideshow.
The Theatrical Trailer lasts 2:19.

Finally there is a U-Control Picture in Picture option with subtitles if you can’t be bothered dealing with secondary audio settings. This is your usual box in the corner with storyboards, behind the scenes clips and cast interviews and so on.

Time has a tendency to sort the wheat from the chaff when it comes to movies, and over 20 years later, I find that I have an appreciation for the Mummy that I didn’t have back when I first saw it. It’s also clear that as a film, it stands so far above its sequels and spin-off that they may as well be parodies. I have no intention of ever watching The Mummy Returns again, or ever getting around to watching The Scorpion King, or Tomb of the Dragon Emperor. By 2000, Hollywood had figured out for the most part how to make sequels as good as, if not better than the original, but the Mummy franchise harks back to the bad old days of one good movie, followed by several cash-grabs.

The Mummy works because it just isn’t a horror movie, despite being on the surface a remake of one of the most classic Universal horrors. It’s a fun, action adventure, very much in the vein of Indiana Jones, and one that still holds up as worthy of comparison. The Mummy also works because the characters are so rich and vivid. They’re all larger than life, and fill the screen, from the lantern-jawed hero in Rick O’Connell, to the scatterbrained chutzpah of Evelyn. Her brother Jonathan has a good-natured larceny to him, but then Beni is opportunistic and self-serving in a wholly different way, a snivelling villain you sort of root for.

The film is replete with scene-stealing performances, and it’s that sort of energy that makes you hang on every word. That’s necessary when the film is just so much comic book silliness. It’s certainly not to be taken seriously, and it certainly doesn’t get the heart racing as any horror movie should. The Mummy is just tremendous fun, which barrels on from one escapade to the next, never pausing long enough to provoke thought or demand anything more than a pop-corn chewing grin. If I do have an issue with the film, it’s that it’s just a smidge too long. There’s a structural weariness in beginning the film at Hamunaptra, shifting to Cairo, then back to Hamunaptra, back to the city, and then back to the tomb again that gets my attention wandering if I’m not fully engaged with the film. Adventure films should have a forward momentum, and the back and forth of The Mummy doesn’t really conform to that genre archetype.

The Mummy has had several Blu-ray releases over the years; this UK release only dates from 2017. But the disc contained within hasn’t changed since 2008, and it is distinctly showing its age, especially in the quality of the transfer. But having said that, it’s still no surprise that it is a major improvement over the DVD, and still very watchable. And yes... there is a newer UHD release with a much better transfer.