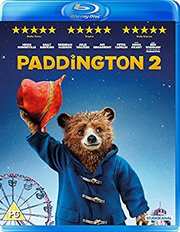 I can’t believe that it’s been over a year since I first watched the original Paddington feature film; a pound store find that overcame my scepticism about a modern updating of, what for me was a cherished childhood memory. To my shock, and pleasant surprise, the modern updating of Paddington was not the travesty that I expected. Instead it was a heart-warming and genuine film, delightfully funny, and keeping all that was special about the good-natured and polite bear from Peru at the heart of the adaptation. I didn’t find the sequel in a similar bargain bucket, although I did get it in a sale from another South American landmark of a retailer. I find that I’m in the mood for some more marmalade sandwiches, and all that they entail in Paddington 2.

Paddington’s aunt Lucy is going to be 100, and he’s looking for the perfect birthday gift to send to her in Peru. He finds a pop-up book of London in Mr Gruber’s antique shop that would be perfect. It was his aunt’s dream to come to London, and this would be the next best thing. But it’s expensive, which means that Paddington will have to actually get a job. Luckily he has the support of his adoptive family, the Browns, and all of their neighbours. Almost all, as Mr Curry still sees Paddington as his eternal nemesis, while Phoenix Buchanan, the actor who lives next door seems far too self-absorbed to take any interest in Paddington; yet he does pay attention when Paddington tells him about the book. But then the book is stolen from the antique shop, and Paddington is accused of the crime. It will be up to the Browns to investigate and clear his name.

Paddington 2 gets a 2.39:1 widescreen 1080p transfer, and you have the choice of Dolby Atmos (7.1) and DTS-HD MA 5.1 Surround English, as well as DTS-HD MA 2.0 Stereo English audio descriptive, with optional HOH English subtitles. It’s another pixel perfect presentation. The image is clear and sharp, with no visible issues with compression or the like. The audio comes across well, the dialogue is clear, and the action and music is nice and immersive. Just as in the first film, Paddington really feels like a character in the film, not the end result of dollars and dollars and hours and hours of special effects, which is as it should be. The colour palette is lush and warm, and the fairy tale London returns, a nice, clean, happy place to live.

You get one disc in a BD Amaray case wrapped in an o-card slipcover.

The disc autoplays trailers for Early Man, Shawn the Sheep: The Movie, and the Paddington mobile phone game, before booting to an animated menu.

I can still remember when it was guaranteed that a sequel would not live up to the original film. That’s long been a thing of the past, as producers and studios realise that a lucrative franchise can only stay lucrative as long as punters shell out, and it’s in their best interests to maintain, if not better the quality. But the original Paddington film had set such a high bar that I slipped into my old way of thinking, and expected, if not the worst from the sequel, then something that just couldn’t live up to the original. I was wrong. Paddington 2 not only matches the original in quality, it exceeds it, telling a delightful and magical adventure story, with warmth, humour and a sense of joy, once again staying true to the nostalgia and love that we ‘older’ children have for the character, while making sure that the story appeals to all audiences.

One thing that this film does better is that it really fills out Paddington’s world, introducing us to his neighbourhood, and how he has become a part of it in the years since he first came to London. We get to meet all manner of wonderful characters in his street, and the film partakes of all manner of British comedy talent to fill its cast. It’s a nice story as well, with Paddington simply wanting to get his aunt a birthday present, and things getting out of hand, when the gift he has in mind turns out to have a secret that attracts avaricious eyes. A pair of those eyes belongs to Phoenix Buchanan, High Grant playing a washed up actor with delusions of grandeur, and a desire to restore the fame that he once had, by hook or by crook. He’s flamboyant and colourful and a charismatic character that really entertains.

One of my small nitpicks with the original film was that it began with a moment of darkness, which might have been a little too much for the youngest of audiences. I felt that Paddington 2 might be heading into similar territory once the little bear was accused of theft, and forced to leave the Browns and spend some time at her Majesty’s pleasure. The idea of being alone and away from family can be stressful enough, without the menacing, big, burly prisoners, but all it takes is one red sock in the prison laundry to make you see the second act in a completely different light.

Paddington 2 is a delight. It’s inventive and funny, with a great story, and a wonderful sense of humour. The pace is just right; it kept me glued to the screen for its runtime, and it managed to thaw even my cynical heart enough to be moved by the final scene. And stick around for the end credits, and then watch that bit again in full screen in the extras. The Blu-ray is great, and the film is even better.