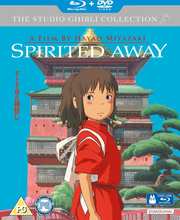 DVD
Spirited Away (US)

Review for Spirited Away - Double Play: The Studio Ghibli Collection

Today’s quickie double-dip Blu-ray review is Spirited Away, the Oscar winning film from Hayao Miyazaki and Studio Ghibli, and to date the only anime film to win an Academy Award, giving false hope to legions of anime fans that their favourite medium had finally hit the mainstream. Studiocanal have been gradually working their way through the Ghibli back catalogue, giving those films with a dub the HD presentation on Blu-ray, and as you might expect for Miyazaki’s most famous creation, they saved its release for what was close to last. I think of the classic Ghibli or Ghibli-esque titles in their catalogue, only Ocean Waves, Only Yesterday, and The Little Norse Prince lack HD releases, with the former two available only in Japanese, and the latter actually a pre-Ghibli title. I’m still keeping my fingers crossed for Only Yesterday, but it may eventually have to be an import. 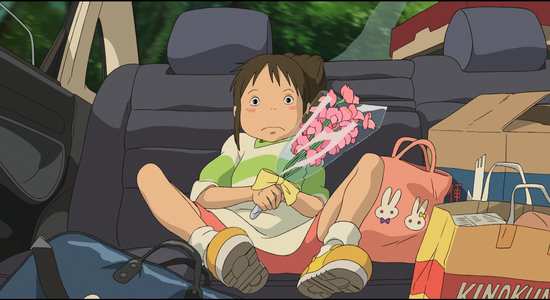 Spirited Away is an interesting title for me to revisit, as one could argue that Ghibli’s fortunes have been declining since its release. Certainly in terms of manpower, Ghibli as a functioning studio has pretty much ceased to exist, with them unable to find the next Miyazaki or Takahata to take hold of the reins. It seems that Ghibli now only exists to curate its back catalogue, rather than create something new, and The Tale of The Princess Kaguya, and When Marnie Was There might just be the final films we’ll see from that studio. But I’m also not alone in thinking that Ghibli lost a certain something following Spirited Away, that none of its films after that Oscar win ever lived up to that high point, or indeed any of the earlier films from the studio like Kiki’s Delivery Service, Porco Rosso, or Princess Mononoke. In comparison, the later films adapted mostly from Western literature like Arriety, and Howl’s Moving Castle seemed to lack the same magic, while the less said about Tales of Earthsea, the better. I’m curious whether the seeds of this decline can be seen in Ghibli’s last resounding critical, audience, and financial success, Spirited Away. 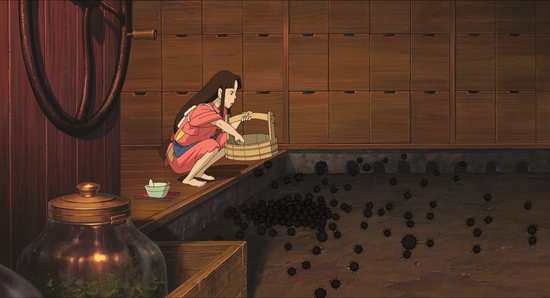 Chihiro is a ten-year-old girl whose family is moving house. She’s been uprooted from her school and her friends, and understandably she is sulking. But on the drive to their new home, her father gets lost and takes a wrong turn down an overgrown road that leads to a tunnel. Her parents are in the mood to explore despite her protests, and the other side of the tunnel reveals an abandoned town that her father assumes to be part of a theme park. It is nothing of the sort, and her parents make the mistake of eating some freshly prepared food at an empty stall. As a punishment they are turned into pigs, and Chihiro is put to work at a bathhouse that caters for countless gods and magical spirits. The bathhouse is run by the sorceress Yubaba, who is perfectly happy enslaving Chihiro and her parents for eternity. Chihiro will have to keep her wits about her to rescue her family; fortunately she has the help of a young spirit named Haku with whom she shares a mysterious connection.

This review offers my impression of the Blu-ray, but to see more detail about the film itself, and what I originally thought, click this link to read the DVD review. 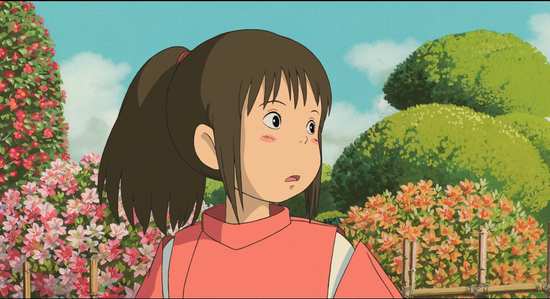 Spirited Away on DVD was a beautiful thing when I first bought it, but the one thing that niggled me about it was compression. There’s a scene where Chihiro is running through flowers that just breaks up into a pixellated mess, the DVD format just can’t handle it. And then when I watched it for the first time on a flat panel display after watching it for years on a CRT screen, I realised that it was window-boxed for the purposes of overscan.

Thankfully, Studiocanal give it the treatment it deserves on Blu-ray, offering a 1.85:1 widescreen transfer at 1080p resolution, making full use of the screen with no black borders, and bringing out the film’s fantastic art with vibrant colours, rich, luscious detail, and no compression whatsoever. There’s certainly no pixellation here, and there’s no digital banding either. Spirited Away looks fantastic, and given that this is an in-house transfer, instead of the Madman sourced transfers that Studiocanal often use with their Ghibli discs, the DNR which some find excessive is absent as well. It’s all for the good as this is a film to savour, richly designed, beautifully animated and a visual feast throughout. CGI is rarely and subtly used to enhance the experience, and seamlessly blended into the traditional 2D animation. The variety of characters and the lush environments are a cut above what we see in other similar animations, and any frame could be hung on a wall as a piece of art. 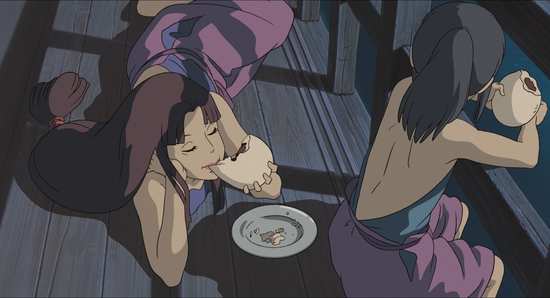 You have the choice between DTS-HD MA 5.1 Surround English and Japanese, with an optional English subtitle track. There is no signs track with this release, just as with the original DVD release. I listened to the Japanese audio this time, and Spirited Away gets a nice, immersive but understated surround mix that really enhances the magical and spiritual feel of the story. The actors are well suited to their roles, the dialogue is clear throughout, and once again, Joe Hisaishi’s wonderfully evocative score gently impels the narrative. The subtitles are accurately timed and free of typographical error, and seem to be a subtle variation on the script used for the DVD. There’s one flub in that a subtitle caption is missing at 30:34 into the film.

Spirited Away is a two disc release offering Blu-ray and DVD versions of the film in one Blu-ray Amaray case, one disc on each face. The case is wrapped in an o-card that repeats the sleeve art and blurb.

The DVD disc is the original Optimum disc but relabelled, and presents the film from an animated menu in 1.85:1 anamorphic window-boxed form, with DD 2.0 and 5.1 English, DD 5.1 Japanese with English subtitles. The only extra on this disc is the alternate angle, full screen storyboards. The first Spirited Away DVD release was a 2-disc special edition which had all its other extras on a second disc.

Not to worry, as most of those extras are on the Blu-ray.

This disc presents its content with a static menu, and there’s a Play All Option for the extras. 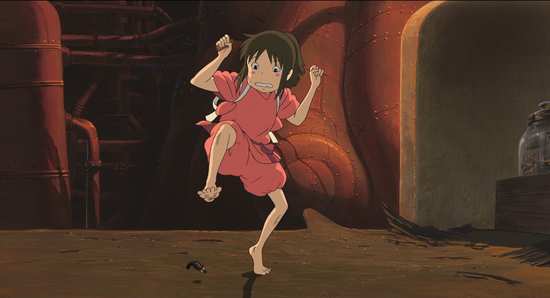 The Alternate Angle Storyboard here is actually a Picture in Picture affair, presenting the storyboards in the upper left corner of the screen.

The Making of Spirited Away lasts 47:35.

The Introduction by John Lasseter lasts 1:15.

There are 17:58 of Original Japanese Trailers.

As you can imagine, all of these extras are repeated from that DVD release, although there are a sight few trailers on this disc. The trailers are in 1080p HD, but the rest of the featurettes are in US unfriendly 576i SD format.

10 years ago when I got the Spirited Away DVD, I was very happy with my purchase. That wouldn’t be the case today, as that particular disc doesn’t hold up well when scaled up to modern flat panel displays. You can see that for yourself if you try watching the DVD that comes with the Blu-ray, although it is useful for seeing the storyboards in full screen instead of postage-stamped into a corner. This Blu-ray is the essential upgrade, offering tremendous clarity, wonderful colours, and absolutely no visible compression. Critics of DNR applied to Ghibli films on Blu-ray will also be happy with this in-house effort from Studiocanal, although the subtitling isn’t quite up to Madman Entertainment standards. This is very much a double-dip worth dipping. 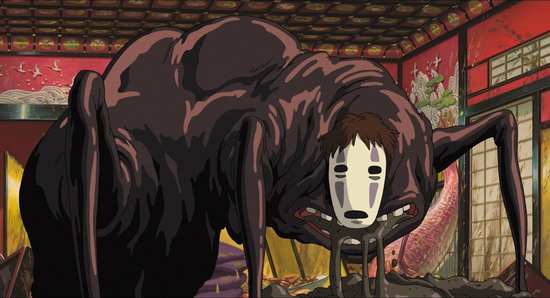 In the end, I could find nothing in Spirited Away that would point to Ghibli’s later, perceived decline. It’s still a magical, heart-warming and brilliantly told fairy tale that has audiences entranced during its runtime, replete with wonderful characters and an engaging story. It’s still not my favourite Ghibli, but I can’t fault it in any way. This is Miyazaki and Ghibli at the top of their collective game, deservedly the pinnacle of their output. Perhaps it’s the very chase to match that glory that left subsequent films wanting. If you still have Spirited Away on DVD, throw that disc away and buy this Blu-ray, and if necessary the Blu-ray Player and HD TV to watch it on, as this is now the definitive way to experience this film at home.