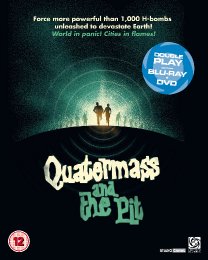 Quatermass and the Pit (Blu-ray Details)

Review for Quatermass and the Pit

Quatermass and the Pit

The English company, Hammer Film Productions are known as one of the most universally identifiable movie making houses. While they dabbled in many a genre, Hammer are obviously most fondly regarded for their series of gothic horrors, although critical opinion at the time was often crushing and negative. The public lapped up their ferocious (at least at the time) take on period horror, and classic monsters of movie history, such as Dracula, and Frankenstein. Their finest moments include, though are not limited to, Dracula (1958), The Damned (1961), The Devil Rides Out (1968), and Dr Jekyll & Sister Hyde (1971).

Quatermass was actually a successful 1953 television serial on the beeb, written by Nigel Kneale, that proved enough a success to warrant two further sequels. Kneale himself adapted the serial for cinema, having already felt great dissatisfaction with the cinematic treatment of the Quatermass Experiment (1955), and Quatermass II (1957).Roy Ward Baker was brought on board as director, having achieved success internationally with A Night to Remember (1958). Although Baker would come to be best remembered for his Hammer output, he was considered quite the coup at the time.

The plot is straightforward stuff on the surface. An excavation underground in London's Hobbs End Station leads to the discovery of a mysterious alien craft. Dr. Quatermass investigates, hindered and supposedly aided by the military. Tension mounts as the power of the alien craft rises, enabling a strange energy to affect citizens through the form of possession following a disastrous press event.

There is more going on in this than mere alien attacks, or an invaders story. Kneale's script plays with themes such as racism, and delivers notions of exterior forces bearing influence over both human behaviour and evolution.

Obviously, Quatermass is a dated piece of work, and one that may not play particularly well for first time viewers. It's ideas and achievements have been lifted by numerous filmmakers over the years, and applied to glossier, bigger, brasher, and in some cases better pictures. This may affect the opinion of those who are not familiar with the genre at the time, nor have the patience to cope with it's comparatively unglamorous appearance. It should absolutely be considered with the period in which it was made in mind. Having said that, the film benefits from a snappy pace, that admittedly, takes a while to get going, but builds towards a sprightly final third.

Andrew Keir's turn as Quatermass is still a joy to watch, though hardcore fans of the series will likely disagree. Regardless, the performances in general are a cut above the usual hammer standard, with one of the studio's usual starlets, Barbara Shelley, also impressing greatly. In fact, all of the players combine to make Quatermass a very watchable, professional drama.

The disc itself is an extremely commendable restoration, looking as sharp as I could imagine it ever will. There is a lot of grain present on the image, as one would surely expect, but they've dealt with this well to prevent it being an eye-sore, and the result is a 1.66:1 picture that really shows up some strong colours and vibrant settings. The bright greens of the alien ooze are impressively gooey and bright. Likewise, the audio is clear, and the climatic scenes in the film reveal a depth that viewers may find surprising.

As for extras, fans are treated to a selection of exclusive interviews with Kim Newman, Marcus Hearne, Joe Dante, Julian Glover, Mark Gatiss, and Judith Kerr, an episode of World of Hammer, and both UK and US trailers. We also get the alternate American credits and an audio commentary with Baker and Kneale.

Kim Newman's section is superb, he's as literate and enthusiastic as always, and generally has a lot to say about the intellectual worth of the Quatermass series. His interview clocks in at just under thirty minutes and for me, is the highlight of the entire Blu-Ray. Joe Dante speaks more briefly, but still packs in a ton of information, as a clear connoisseur of all things Hammer. Likewise, Mark Gatiss is a delight as ever, retelling how he discovered the film, and generally Hammer movies, through the BBC double-bills of old.

Best of all, should be the World of Hammer- Sci-Fi episode. This includes of clips of various, related sci-fi flicks, with a voiceover the drifts in and out. Unfortunately, the sound balance is all over the place, with the narrator being almost inaudible at times in comparison to the sometimes booming noise of the clips. Additionally, it's also a little dull drifting in and out of extended footage of films with little actual discussion about them being presented. In fairness though, The Quatermass Experiment looks terrific from the clips presented, and the inclusion of Peter Cushing's Dr Frankenstein adds much needed variety. Meanwhile, scenes from The Damned are of course a real highlight from the studio's cannon. An enjoyable retrospective.

Quatermass certainly isn't for everyone. Those who immediately dismiss work from this period, and particularly Hammer detractors, will find this tough going. It's definitely a little quaint, hammy, and on the surface, rather lightweight. But then again, it's a film that absolutely has to be seen in terms of the history of Science Fiction and nostalgia is as always, a compelling ingredient. Nigel Kneeler's punchy, intelligently condensed script is a personal highlight, and for me, the star of the show.

Whatever your interpretation of the film, and preference in regards to the television show versus film, this is a superb package that Optimum have put together, and comes highly recommended for Quatermass and Hammer enthusiasts alike.