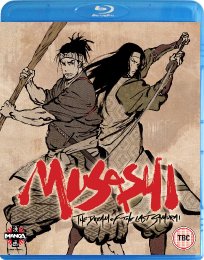 Musashi: The Dream of the Last Samurai (Blu-ray Details)

Review for Musashi: The Dream of the Last Samurai

I have long extolled the virtues of anime as a medium. No other animation industry in the world has taken the idea that animation is capable of anything so closely to heart. Dramas, sci-fi, action, comedy, romance, soap operas, musicals, it seems that there truly is something for everyone when it comes to Japanese animation. It's what I find so refreshing when comparing it to the likes of Hollywood, where cartoons are still for kids, unless they've got a couple of wisecracking characters to keep mums and dads interested too. I've been so certain of the true faith, and comfortable in my view of the world, that I never expected to have my preconceptions challenged. Then Musashi: The Dream of the Last Samurai turns up for review, and it's something that even I thought anime wouldn't do. It's an anime documentary! That's not a documentary about anime, rather a documentary told through the medium of anime. Blimey! It really can do anything!

Miyamoto Musashi was a fabled warrior that lived in Japan at the beginning of the 17th Century. After making a name for himself at the battle of Sekigahara in 1600, he established himself as a master duellist, one that was never defeated. Over the course of his life, he fought countless opponents, and fought in six major battles, established a two handed fighting style, mastered some non-martial arts like calligraphy and painting, and before he died, he penned the Book of the Five Rings, a treatise on strategy, tactics, swordsmanship and philosophy that is still studied today. Of course the trouble is that 'fabled' part. For it wasn't long before his exploits became more than just fact, and he soon became larger than life. As the years passed more and more fantastic exploits were attributed to him. Then in the 1930s, the novelist Eiji Yoshikawa wrote a fictionalised account of Musashi's life, a story that gained so much popularity, that now many people read it as fact rather than fiction.

Musashi: The Dream of the Last Samurai is screenwriter Mamoru Oshii's attempt to redress the balance, presenting the established facts about Miyamoto Musashi's life, placing his world in context, and dispelling many of the myths that have arisen over the years. It's a blend of live action, 3D CGI and traditional 2D animation. A little computer generated professor, Musashi expert Kiichi Inukai, presents with the aid of his clumsy assistant Iori, a lecture on the life of Miyamoto Musashi. Striking, 2D almost monochrome animation replays the known events of Musashi's life, while the live action footage takes us on a tour of the key locations in Musashi's life, to see them as they are today.

It's ever a joy to watch anime in high definition. You don't have to worry about NTSC-PAL issues, and you don't have to worry about 4% PAL speed up. It's 1080p 24 frames per second, just as film ought to be. The 2.35:1 widescreen transfer that Musashi gets is a little variable though. It all boils down to which section you are watching. The 3D CGI professor moments come across with no problems apparent to my eye. It's clear, colourful and rich in definition and colour, if a little simplistic in terms of character design. The 2D animation is stunning, as you would expect with Production IG doing the honours. The historical sequences of Musashi's life are presented with a limited palette, bordering on the monochrome at times. They are very atmospheric, vividly animated, and wholly effective in evoking the period. It's where you'll find the film's action sequences, and for a documentary, these action sequences outdo most dedicated action anime. I did notice a few instances of colour banding here however. The weak point of the film is in the live action sequences, which more often than not come across with a degree of softness and lack of definition that doesn't live up to the Blu-ray format. That said, the live action making of documentary on this disc has no such problem, so I tend to think it's a problem with the source material, not the transfer,

The images in this review come courtesy of the PR, and aren't necessarily representative of the final release disc.

You have the choice between DTS-HD MA 5.1 Surround English and Japanese. A documentary doesn't immediately strike as the most appropriate use of a surround audio track, but the historical action sequences certainly deserve the treatment. Also there is a lot of music in Musashi, classical, folk and contemporary, and hearing the classical music especially given the multi-speaker treatment adds much to the film. The film's sole dialogue comes from the Kiichi Inukai character, the little comedy professor who relates Musashi's life. It's a dense and fast paced lecture, and you may have trouble keeping up with the subtitles if you aren't a native speaker. Fortunately there is the English track, although it's a voiceover rather than a dub, certainly there is no attempt to match the lip flaps. The problem is that the English voiceover is a little dry and matter of fact, losing the comic overtones of the Kiichi character, and his little byplay with his assistant Iori. You get translated subtitles as well as a signs track for the English dub (which also translates song lyrics).

Musashi is presented on a BD25, and comes with the usual animated menus.

The Musashi trailer is here in its SD glory.

The only substantial extra on the disc is The Making of Musashi, presented in 1080i 60 with LPCM 2.0 Japanese stereo and English subtitles. It's actually all those featurettes you'd normally find on these discs, edited together to make one 57-minute making of documentary, although it isn't chaptered as such. You'll find the initial press conference with the creators, a bit on the recording of the soundtrack, the film's premiere, some more interviews, and three or four visits to Production IG's studios to chat to some of the other creators.

I know I'm stating the obvious, but it is a documentary. It really all boils down to how much interest you have in the subject matter. I had vaguely heard the name Miyamoto Musashi before, I thought he was a character in the Sengoku Basara: Samurai Kings anime, but it turns out that he's actually a character in the second Sengoku Basara video game, and I probably heard the name when I was reading up around the anime. That's hardly enough knowledge and experience with which to approach a documentary about the man's life, and I have to admit that while watching Musashi: The Dream of the Last Samurai may have been intellectually enlightening, I certainly wasn't hooked on every word, and even now, having been told the difference between fact and fiction when it comes to Musashi, I don't feel exactly empowered by the knowledge.

It's all about the target audience of course, and in Japan, where Miyamoto Musashi is a household name, a documentary demystifying the legend would have a far greater impact. It would be equivalent to a documentary presenting the facts about Queen Elizabeth, or William Shakespeare here. I could certainly use the facts about Queen Elizabeth, as now when I think of her, I can only envisage the totally bonkers Miranda Richardson. The interesting points in this film for me don't come in the details about Musashi; rather it's the information that places him in context. There's a great little bit on comparing European knights to Japanese samurai and Chinese cavalry, the differing approaches to warfare and the differing social statuses of warriors that fought on horseback. Also of interest to me was just why Musashi's legend was so strongly promoted at the start of the twentieth century, a reinvention ordered by the Japanese government to instil a warrior pride back into a military humiliated in the Russian Japanese War. Also was the astounding revelation that the term 'bushido' is a relatively recent construct.

That leaves this film's status as an anime documentary that makes it worthy of consideration. After all, animated documentaries are hardly clogging the shop shelves. There is a certain similarity to those public information films, so effectively spoofed at the start of Jurassic Park, and Musashi certainly has the same, light tone to it, but there is a difference between a public information film and a feature length dedicated documentary. Also the animation is excellent, both the comedic lecture sections, and especially the 2D period 'reconstructions'.

So anime fans, certainly anime fans that are expecting a samurai movie, are probably going to be disappointed with Musashi: The Dream of the Last Samurai. Fans of animation, and film fans in general may on the other hand find an appeal with something that pushes the boundaries, does something unexpected and new with the medium. Certainly, I'm not disheartened at having Musashi on my shelf, but I have to admit it's there as an intellectual curiosity at best. The ideal audience for Musashi would be someone who has an interest in that period of history, even better if they actually know who Miyamoto Musashi was. Musashi: The Dream of the Last Samurai may not be what you are expecting from anime, and it may have some difficulty finding its audience in the UK, but I'm so glad that Manga Entertainment have taken a chance on it, if only to showcase just how versatile a medium anime truly is.﻿