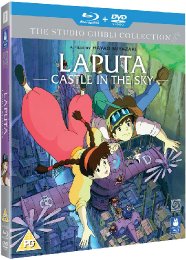 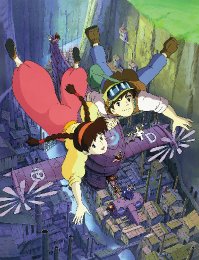 DVD
Castle In The Sky (US) 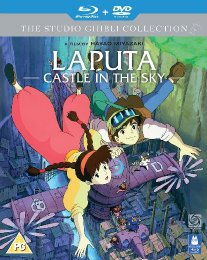 Synopsis:
The beauty of Studio Ghibli can now be enjoyed on both the original DVD and Blu-ray with this all new Blu-ray Double Play edition!

Available for the first time in high definition on Blu-ray Double Play courtesy of Studio Ghibli and master animator Hayao Miyazaki Laputa: Castle In the Sky is an imaginative tale full of mystery and adventure. The high-flying journey begins when Pazu, an engineer's apprentice, finds a young girl, Sheeta, floating down from the sky, wearing a glowing pendant.

Together, they discover both are searching for the legendary floating castle, Laputa, and vow to unravel the mystery of the luminous crystal around her neck. Their quest won't be easy, however. There are sky pirates, secret agents and monumental obstacles stopping them from discovering the truth - and each other. However, Laputa is more than it appears, and some seek to use it for evil.

Laputa: Castle In the Sky continues Hayao Miyazaki's obsession with air travel, featuring some truly remarkable designs, especially for the floating fortress Laputa itself. It is said that he based a lot of the environments on rural Wales, following his time spent there during the miner's strikes.﻿