They have film festivals in Venice?

Okay, okay, I'm embarrassingly late with this snippet, but if there is one name synonymous with anime, which also generates massive buzz in the film world in general, that's Hayao Miyazaki's. After all, winning an Oscar for Spirited Away does leave a lasting impression. Since then, Hayao Miyazaki's back catalogue, and the other works of Studio Ghibli have received a warm welcome in the UK, proving to be one of Optimum's success stories. Fans also keep an eye out for his latest films, although they are rare gems indeed. The BBC website has an interview with the veteran director, as he brought his latest creation to the Venice Film Festival, Ponyo On The Cliff By The Sea. It also mentions that Ponyo will premiere in the UK next April.

Who You Gonna Call… Ghost… hunters?

You can't get away from free anime these days. It's a far cry from when studios used to crack down on fansubbers, bemoan the proliferation of their hard won licences on the Internet before the ink even dried on the contract. We may live in a multi-channel world with endless choice on television, but that choice rarely includes anime. Distributors are finally cottoning on to the advertising possibilities of the net, and they aren't averse to giving a taster of their series, before hooking you with the DVDs. In the latest round of licensing announcements, Manga Entertainment as part of their new arrangement with Funimation, announced the release later this year of Ghost Hunt. Well you can find out what all the fuss is about by heading over to Funimation, where they are streaming the first three episodes for free. 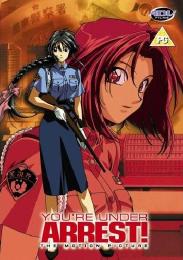 Another slow week for anime, especially as forthcoming titles seem to a little absent again this week (Although not according to my to-do pile). It was retro mode again last week, as I pounced on a couple of titles I had yet to see, with mixed results. Kosuke Fujishima will forever be associated with Ah My Goddess, but he has another long running series to be proud of, You're Under Arrest, although we in the UK can only see it if we import. Up until now, I had only seen the OVAs, so it was with a little eagerness that finally approached the film. See how You're Under Arrest - The Movie fared by clicking the link to Wednesday's review 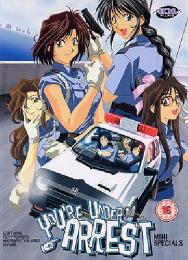 Then on Sunday, I took in the final UK outing for the You're Under Arrest girls, with the You're Under Arrest - Mini Specials. These seven-minute animations are more comedy sketches than stories, and with an army of perverts, panty snatchers and peeping toms to apprehend, there's something here for the Benny Hill fan in all of us. Except for the little bald guy who always gets slapped on the head. So imagine the link is a bald head, and your mouse button an open palm. You know what to do.

We're delving into ADV's back catalogue here, and both the Movie and the Mini Specials are readily available from a retailer or e-tailer near you. Finally, it may not be anime, but the live action Yo-Yo Girl Cop movie is based on a classic manga, which did have an anime OVA spin-off. 4Digital Asia release the DVD on the 22nd of September, and you may be interested in the review. Next week I promise you new anime… I hope…